He gave his readers the chance to make 432% over just two months with cancer-fighting biotech company Synthorx (THOR).

And in December, Jeff recommended selling chipmaker gene-editing company CRISPR Therapeutics (CRSP) for a 332% gain. He also closed out a position in Advanced Micro Devices (AMD) for a 278% gain.

As I (Chris) will show you in today’s dispatch, these gains are only the beginning. So you’ll want to pay close attention.

It’s all to do with a hidden force that’s turning sci-fi into reality… and creating fortunes for thousands of ordinary investors.

The force I’m talking about is exponential growth…

If you follow Jeff’s research, you’ll know about it already.

But if you’re new to tech investing, don’t worry. Everything you need to know is in this simple diagram.

I encourage you to print this out and pin it up next to your computer. It’s a reminder of how profitable tech stocks are going to be over the next decade and beyond. 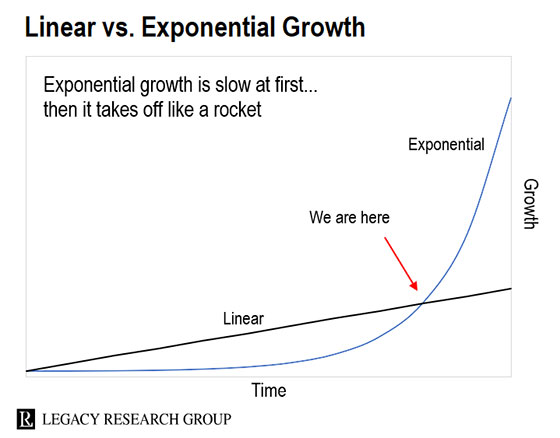 Linear growth (black line) is the type of growth we understand intuitively. It’s stable and predictable. You can base your projections of what the future will look like based on what the past looked like.

Better tech helps us build better tech. Tech innovation follows the same pattern as the exponential line (blue) on the chart. Here’s Jeff with more on how it all works…

Exponential growth is a pattern of growth that shows greater increases with passing time. The reason most people don’t know about it is exponential growth stays nearly flat for a time. You hardly notice it. Then, suddenly, it forms this sharp “elbow” and goes almost vertical.

We’ve seen radical changes in technology during the last two decades – streaming video, cell phones, the internet. But these improvements are only incremental.

They are just the foundation for technology-based changes that will be exponential. That’s my core message to folks who are looking to build real wealth in the stock market – starting now. We’re on the cusp of a new revolution in tech that’s driven by rapid, exponential growth. Those who act now will be the first to realize the extraordinary wealth these changes will bring.

As his followers know, Doug is a big fan of sci-fi. And for years, he’s been pounding the table on the changes coming down the pike thanks to how exponential growth works.

As he’s been telling his readers, the kind of changes coming as a result of exponential (aka geometric) growth will boggle minds. Doug…

Radically new technologies are coming into existence – not gradually at an arithmetic rate, but at a geometric rate. So things are on the verge of becoming much, much better, and very, very quickly. Not only better than you imagine, but better than you can imagine.

In short, we’re living through the “elbow” phase of innovation…

And it’s showing up as all sorts of mind-blowing breakthroughs that feel a lot like the stuff of sci-fi.

As Jeff has been showing his readers, last year, scientists effectively cured two people suffering from genetically caused blood diseases. One had sickle cell disease. The other had beta thalassemia. Both conditions can be fatal if left untreated.

As we showed you back in October, the world’s first quantum computer has completed a task in three minutes and 20 seconds that would have taken the world’s most powerful digital supercomputer 10,000 years to complete.

Another case of exponential change in action is “quantum teleporting”…

I’m no tech expert. But Jeff’s original insight at his free tech-investing newsletter, The Bleeding Edge, is a great explainer.

In short, scientists in England successfully “teleported” information from one microchip to another by harnessing the laws of quantum physics.

This information didn’t pass through space in any physical form, such as light or a wave. The information was in one chip one moment… and in the other the next… without any physical travel in between.

Jeff’s insight prompted a flood of feedback. Some of his readers even thought he might be trying to pull a fast one on them.

Reader G.H. summed it up best with this short email…

Dear Jeff, your report about quantum teleportation threw me off balance. Is this for real? Is this a hoax?

But quantum teleportation isn’t a hoax…

It just seems impossible that you can teleport information… because it’s never been possible before.

But if you think in exponential terms, this kind of radical change is not surprising at all. Quite the opposite…

If you understand where we are in the exponential growth curve right now, it’s exactly what you would expect.

We’re getting faster and faster innovations… and more mind-blowing tech breakthroughs… and investors are reaping the rewards.

So how do you profit?

You can get exposure to the power of this exponential growth through a tech stock fund.

The two most popular ones are Invesco QQQ (QQQ) and Technology Select Sector SPDR Fund (XLK). QQQ offers exposure to the NASDAQ, with a hefty allocation to technology companies. And XLK includes companies throughout the tech sector, such as Apple and IBM.

But as Jeff has shown with his record of picking the top winners in tech, it’s also worth following him, for free, over at The Bleeding Edge.

Every day, he puts out three of the top tech developments on his radar. And it’s fast becoming one of our most popular e-letters, judging by all the great feedback Jeff generates.

And if you’re interested in more actionable ways to profit from the boom Jeff sees coming, make sure to sign up for his upcoming event.

Next Wednesday, January 22, at 8 p.m. ET, he’ll reveal a new tech-stock trading system he’s been working on. It’s a system he uses to pinpoint… with precision and accuracy… when a tech stock is primed to move.

This is something Jeff has been working on in the background for the past five years. And he’s keeping the details under wraps until his event goes live next Wednesday.