The U.S.-China trade war dominated headlines this week. And we dug into the dark side of it here and here.

But today – in answer to a question from one of your fellow readers – our Silicon Valley insider Jeff Brown (Exponential Tech Investor and The Near Future Report) gives a completely different take on the dickering between Washington and Beijing.

Below, Jeff shows why he believes it’ll all be over soon… and which two sectors will get the biggest boost once it’s settled.

Reader question: It seems to me that the market is treading water waiting for a deal with China, and then it’s off to the races?

Jeff’s answer: I had lunch with the former prime minister of Australia, Kevin Rudd, recently. Aside from his previous role, he is the President of the Asia Society Policy Institute right now and a specialist on U.S.-China relations (he speaks Mandarin very well).

My biggest question was around U.S.-China trade discussions. I have long felt that the current U.S. approach has been very smart with respect to the negotiations – it was the only way to bring China to the table for concessions.

This confirms my thinking and is also very strong for tech companies with ties to China. Many tech companies have been affected by the trade discussions and they have had a large negative effect on the China economy.

Next up in today’s mailbag, we turn to a question about the hottest of all hot-button issues we’re covering for you at The Daily Cut… the rise of a Surveillance State in the U.S.

I agree that we are grossly over-monitored, but I don’t see any increase in this particular case. Please explain what I’m missing.

Dan’s answer: In the JetBlue case, the worry was that the company was matching the picture at the gate with a government database made available by the Department of Homeland Security or Customs and Border Protection without the knowledge or consent of the traveler.

Nothing to hide; nothing to fear, right? Wrong.

It means there’s no more distinction between public life and private life. There’s no presumption of liberty if you’re out in public. No divide between what’s your business and what’s the government’s business. Absolute Nirvana for the authoritarian mind.

Moving on… a handful of crypto questions for one of the asset’s earliest investors – Marco Wutzer (Disruptive Profits).

Reader question: I have about 42 open crypto positions that I have been building over the last year or more during the bear market bottom. I have picked only the strongest based on project fundamentals, price technicals for entry at lows, and, of course, liquidity.

I’m getting really sick of waiting because I need a windfall right now. But patience is rewarded, eventually, if you are in the right places. Does Marco have any thoughts he can share on near-term catalysts?

Also, can he share any thoughts re: altcoins vs. Bitcoin and Ethereum?

It is important to understand that markets move in cycles. As professional speculators, we buy quality projects when the cycle is close to a bottom. And when the time is right, a catalyst will appear and start the bull phase of the cycle – whatever that catalyst might be.

You are on the right track. As much as we all wish for immediate windfalls, more patience is needed. Eventually we’ll be richly rewarded.

Regarding your second question, I see Bitcoin as the only crypto blue-chip over the short and medium term. I am much more skeptical of Ethereum and its scalability issues. In fact, several newer blockchains solve Ethereum’s scalability issues. This is one area of the Blockchain Ecosystem that the Disruptive Profits portfolio is focusing on.

Generally speaking, the high-quality altcoins are a fertile hunting ground for big profits. This is where you can make several times the gains that Bitcoin can deliver.

In the last two entries in this week’s mailbag, some readers have concerns about a looming market downturn.

Reader question: Hi, Jeff. When you look at all three indexes on a weekly chart (S&P 500, Dow, and Nasdaq), do you see a Double Top formation building up? Or am I doing this technical analysis thing all wrong? I would appreciate your comment. Thanks! 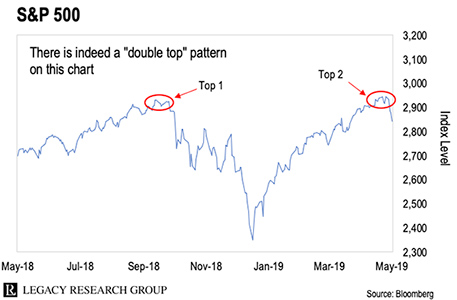 There is indeed a “double top” pattern on this chart – with the first top forming last September/October, and the second top forming this month.

This is a bearish pattern that can indicate the reversal from a bull trend to a bear trend. So, it’s worth paying attention to.

Keep in mind, though, that until key support levels are broken to the downside, this pattern isn’t confirmed.

For example, if you look at the action since the market bottomed in December, you can see that every pullback in the S&P has formed a higher low on the chart. So, the first step to confirming this double top pattern would be for the index to decline and make a lower low. So, we’ll need to see the S&P drop below the 2800 level or so.

The next step to confirm this pattern is for the index to make a lower high on the next rally attempt. If the S&P rallies above the recent high at about 2950, then that invalidates the pattern.

For the moment, I think you’re onto something. But, we need to see a lower low and a lower high on the index in order to be sure.

Before we move on, Jeff just released his 3-Stock Retirement Blueprint. Check it out right here.

Reader question: Wondering if sometime you could address the question of what usually happens to gold mining stocks in the event of a major market correction or even bear? Do they tend to follow the broader market down or (possibly) track gold higher? Thanks for all the advice.

E.B.’s answer: Great question. Your conclusion is logical because gold holds up when other assets don’t. However, there’s something very important that I learned a long time ago as a professional. When the market tanks, people sell what they can sell, not what they want to sell.

Take 2008, for instance. Gold hit a high over $1,000/ounce in March, nearly six months before the market collapsed. In September, the markets tumbled. Gold fell to a low around $700 per ounce. I know because I bought some in November of 2008 for around $725/ounce.

As you know, gold went on to run from that low of $700 to an all-time high of $1,925 in the ensuing 30 months. The reason I bring this up is to show that gold faces selling because it has value even when other assets don’t. After things stabilize, it tends to do better than stocks, which need some time to recover.

Mining stocks mimic that move but use rocket fuel to do it. Take royalty company Wheaton Precious Metals (WPM), for instance. Shares cratered in November of 2008, falling to a low of $2.57. They followed gold down then snapped back with a vengeance, running 1,725% higher over the following 30 months.

What this shows is mining stocks are not immune from market turmoil like we saw in late 2008. Regardless of direction, they tend to multiply the moves we see in gold or silver.

I talked to Chris Lowe about this earlier in the year, so you can find a more detailed explanation of why mining stocks act this way in the February 21 issue of The Daily Cut.

If you’ve been following E.B., you know he sees trouble ahead for the U.S. economy. That’s why he has his eyes set on a new approach to making explosive gains in 2019.

It has to do with a little-known security that both he and Legacy Research cofounder Doug Casey have used to book big winners throughout their careers.

They call these explosive securities “premium shares.” They can hand investors gains 10x bigger than options. And they’ve been paying off big time for E.B.’s Strategic Trader subscribers…

One of E.B.’s recommendations is up 218% in three weeks. Another is up 74% in just over two months. And three others are up 20%-plus since we launched Strategic Trader in late February.

E.B. says these premium shares are the best way to take advantage of a market crash. And he believes these gains are just a taste of what’s to come.

If you’d like to learn more about E.B.’s strategy, make sure to watch this video presentation.

It shows you how these securities work, why they’re essential in today’s environment, and much more.

P.S. This September, join our experts for three days of investment insights in beautiful Carlsbad, California…

E.B. Tucker, Jeff Clark, Dan Denning, Marco Wutzer, Chris Lowe, and Jeff Brown will all be there at our second annual Legacy Investment Summit. And for a limited time, you can get tickets for hundreds less than everyone else will pay. Get the details right here.