Chris’ note: Bitcoin has had a volatile few weeks. But over the long term, we still see it as a great inflation hedge. And fears of inflation are growing in the U.S…

That’s why today, I’m unlocking subscriber content from our premium weekly big-ideas advisory, Legacy Inner Circle. It’s a conversation I had with Casey Report chief analyst Nick Giambruno about why bitcoin is surging in value relative to government currencies like the dollar. As you’ll see, it’s all down to bitcoin’s “hardness” as a money…

Chris Lowe: Bitcoin (BTC) is up 466% since you called it the “new crisis currency” and recommended it to our Casey Report readers in June 2018. That’s a heck of a lot more than the U.S. dollar [which is down 5%] or other fiat currencies.

You wrote one of the most interesting reports on bitcoin I’ve read in a long time. You make the case that the reason you want to own gold and bitcoin over government-issued currencies like the U.S. dollar is that they’re “hard assets.” They’re both hard to produce more of. That means their value can’t inflate away.

Gold is a physical thing. And a lot of folks view it as the hardest currency in the world. But you’ve been making the case that bitcoin is an even harder currency than gold, and potentially an even better store of value as a result.

A lot of folks may get confused and think, “How can bitcoin be hard money? It’s digital. It’s not physical.” Could you explain why you’re so bullish on bitcoin? Why not just go all in on gold? Why have bitcoin in your portfolio at all?

Nick: It’s an interesting question. And I know it’s one a lot of our readers are thinking about.

Bitcoin is an entirely new phenomenon. It doesn’t fit into the mental frameworks most people have when they analyze investments and currencies.

Bitcoin is like the platypus in a certain sense. When the platypus was discovered, it didn’t fit into people’s framework at the time for classifying animals. As a result, many people couldn’t wrap their minds around it and didn’t believe it was real… but it was.

Bitcoin is similar in that it is a completely new thing – genuine digital scarcity. And that’s a very profound invention.

You’re absolutely right – hard does not necessarily mean physical. It means hard to produce relative to existing supply. That’s the proper use of the word, in the context of a hard asset.

Another way to think of it is like this. Hardness is simply resistance to inflation. In my view, that is the most important attribute of a good money.

Chris: But if bitcoin is digital – like most dollars these days – how is it hard to produce? I think that’s a big stumbling block for a lot of folks.

Nick: This is a subject we could talk about all day. But the thing you’ve got to grasp about bitcoin is its rate of inflation is constantly decreasing.

Your readers may have heard of the “halving.” About every four years, the supply of new bitcoin entering circulation gets cut in half. [In order to earn new bitcoin, “miners” must solve complex math problems that use a lot of costly computer power. The halving cuts the reward for solving these problems in half. For a more in-depth explanation, go here.]

Compare this to gold, for example. The rate of increase in the supply of above-ground gold is about 1.7% a year. Bitcoin is right around that sweet spot, too. But unlike gold, the supply of new bitcoin gets cut in half every four years.

Here’s an easier way to think of the halving…

There’s a euphemism that central bankers use for printing money. They call it “quantitative easing.” Well, here’s something that’s not a euphemism – bitcoin’s halvings are quantitative hardening.

That’s really all you need to know about bitcoin. Bitcoin is becoming harder and harder, as government currencies are getting easier and easier to produce. Over time, this is going to cause a lot of people to dump their government confetti currencies and buy bitcoin – and gold – to protect their buying power.

Chris: What about the argument you hear that, because it’s relatively easy to code bitcoin copycats or competitors, bitcoin’s fixed supply isn’t relevant?

Nick: This is a silly argument. It’s like claiming that you can increase the supply of gold by increasing the supply of pyrite, or fool’s gold.

It’s true that there are plenty of other cryptocurrencies out there. But the bottom line is bitcoin is the only one you can call a truly hard asset. All the other cryptos can be controlled by insiders, development teams, and founders – from ether (ETH), the second-most valuable crypto in the world, on down.

The rules are up for change – especially the monetary policy. The folks at the head of Ethereum, the blockchain network behind ether, don’t even know what their monetary policy is going to be in a few years because it’s trivial to change it.

According to the immutable bitcoin protocol, it will be approximately 20,031,946.

None of the other cryptos have a credible monetary policy like bitcoin. They are not hard assets.

That’s the whole value proposition of bitcoin: No group of insiders can get together and alter the bitcoin protocol. In short, bitcoin has genuine scarcity. All the other cryptos have artificial scarcity.

Actually, it was a terrific reinforcement of bitcoin’s value proposition – nobody can control it, not even the most influential people. That means bitcoin has a monetary property no other crypto has: Namely, it is truly immutable.

The issue is clear to the market, where real people are voting with their money. The market values of these knockoffs and other cryptos are mere fractions of the real bitcoin’s market cap.

Chris: You also run a deep-value advisory called Crisis Investing. Your aim there is to profit in places where crises have knocked prices down to extremely low levels, with huge upside.

One of the trips you took – which I found fascinating – was to Zimbabwe. The country suffered a terrible hyperinflation. At its height, between 2008 and 2009, experts estimate that the Zimbabwean dollar, the country’s currency, was inflated at an impossible-to-conceive rate of 79.6 billion percent month over month.

Along with Legacy cofounder Doug Casey, you met up with Gideon Gono, who ran the central bank of Zimbabwe when this was happening. What insights did you take away from that meeting? 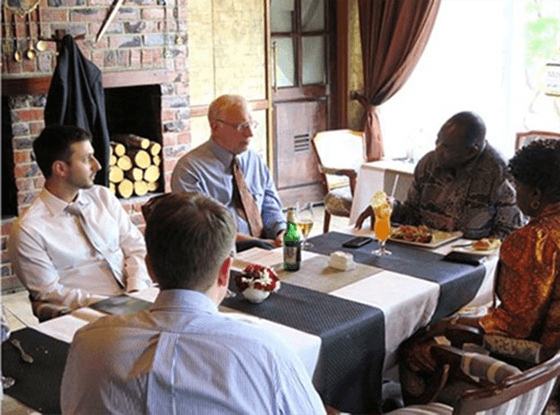 Nick: Gideon was actually highly intelligent and an interesting individual.

It’s not as if he didn’t know that printing money was going to cause hyperinflation. He can put two and two together.

But when you give governments the power to print money, they’re going to exercise it. In Gideon’s case, he mentioned there was pressure from the army and the military to do just that. And you don’t say no to people with guns when they tell you to do something – unless you have a death wish.

That’s why central bankers shouldn’t exist. People don’t realize it. But central banking is not that old, in the grand scheme of things. The Federal Reserve, for instance, wasn’t set up until 1913.

Central banks don’t add any value to society. All they do is redistribute wealth to insiders and connected political hacks while impoverishing everyone else. It’s completely toxic and should be abolished.

And central bankers give you these ridiculous notions like, “We need to have 2% inflation a year.” These people have no useful purpose. They should be abolished too. The case of Zimbabwe is an excellent illustration of that.

Of course not. They’re going to print money. It’s the easy option.

This happens only when governments aren’t constrained by a hard money they don’t control – such as gold in the past and bitcoin more recently.

Zimbabwe is a preview of things to come. Exactly the same thing can – and will – happen in other countries.

Chris: A recurring question we get from readers is about bitcoin’s legal status. They worry the feds might ban citizens from owning bitcoin just like they did with gold in 1933.

Nick: First of all, they can’t shut bitcoin down. No government can shut it down. Unless the internet goes down for the whole world, everywhere, simultaneously, they are not going to be able to shut it down.

Trying to prohibit something that’s digital and borderless is completely impractical. I’d like to see them try, because they’ll fall flat on their faces.

Chris: So on a practical level, how should our readers approach owning bitcoin and gold in their portfolios?

Nick: The easiest way to think of them is as alternative forms of cash.

Cash can be used for long-term savings. And here, gold really shines. Gold has been used as a store of value for thousands of years.

But bitcoin should be there, too. Bitcoin is an emerging store of value, so there’s that much more upside to it. But there’s also more risk. So I would have a healthy mix… but skew it toward gold.