Bitcoin is on a rampage…

Since the start of November, the world’s first cryptocurrency is up 20%.

That crushes the returns you’d have made on the S&P 500… the tech-heavy Nasdaq… gold… or silver. 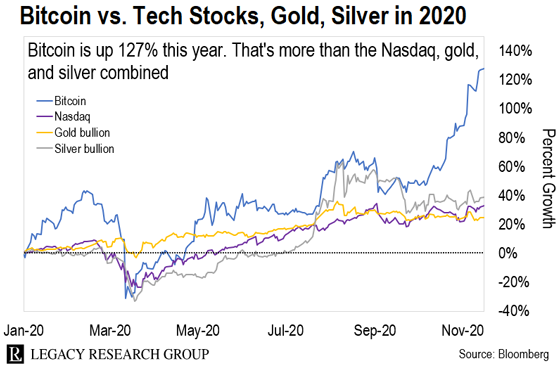 If that sounds like a lot, it’s because it is…

An investment in bitcoin when colleague Teeka Tiwari first recommended it to his readers in April 2016 is up 3,732% so far.

Those are eye-popping gains. And I know folks who’ve transformed their wealth through early investments in bitcoin and other crypto assets.

But I’m here to tell you today… Although the gains so far are impressive… the real bitcoin bull run hasn’t even started.

That means it’s not too late to make life-changing gains in bitcoin.

It’s all down to mass adoption…

My mission here at the Cut is to bring you the best investment ideas from Teeka, Jeff Brown, Dave Forest, Nick Giambruno, Bill Bonner, Doug Casey, and the rest of the Legacy Research team.

Those ideas all have one thing in common… They’re still not in the mainstream. But they’re getting there.

And when a powerful new technology goes from fringe to mainstream, it can be a truly astonishing wealth-building event.

Just think how the internet started…

It’s easy to forget. But back in the 1990s… when the really big money was to be made in internet stocks… the internet was still on the fringes.

Most investors didn’t have a clue what the internet was… let alone how it would transform society and generate trillions of dollars in profits.

There’s a story that when Jeff Bezos was raising the first round of capital for his startup online bookstore, Amazon.com (AMZN), the most common question he’d get from the venture capitalists he was pitching to was, “What’s the internet?”

These folks were some of the smartest brains in the world. They were paid six-figure salaries to spot emerging market megatrends like the internet.

And they didn’t even know what the internet was.

But that’s the sweet spot. Because that future had yet to be priced in. Once something is mainstream, early adopters have already gobbled up most of the profits.

Just look at what happened to Amazon shares as the internet went from fringe to mainstream. 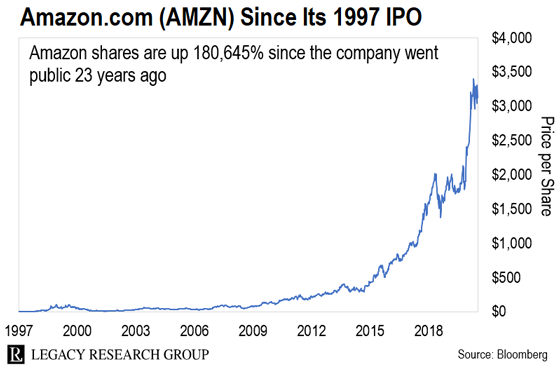 As you can see, Amazon shares have gone up 180,645% since its IPO (initial public offering), when public investors could get in for the first time.

That’s the power of mass adoption…

When Bezos was pitching Amazon.com on Wall Street… only 16 million people – about 0.4% of the world’s population at the time – had internet connections.

And they were over clunky, dial-up modems.

If you’re of a certain age, you’ll remember them. You had to take over the home phone connection to get online. And download speeds were less than one megabit per second. That’s about one thousandth of the speed of 5G wireless networks today.

You could barely download photos, let alone stream HD video or play computer games in real time with people from anywhere on the planet.

Today, 4.8 billion people are online. That’s roughly 62% of everyone alive today. And the biggest internet players are some of the most valuable companies in the world.

The five most valuable tech stocks in the U.S. – Facebook (FB), Amazon.com, Apple (AAPL), Microsoft (MSFT), and Google (GOOG) – are worth more than the 380 smallest stocks in the S&P 500 combined.

Today, Amazon alone has a market cap (the sum of all its outstanding shares) of $1.5 trillion.

That’s more than the combined value of all the stocks listed on the South Korean stock market.

One huge leap this year is publicly listed U.S. companies turning to bitcoin as a cash reserve asset.

In August, Virginia-based business-intelligence software company MicroStrategy (MSTR) announced it was converting $425 million of its U.S.-dollar Treasury reserves to bitcoin.

Saylor also made the case for why bitcoin is “digital gold”…

Bitcoin is digital gold – harder, stronger, faster, and smarter than any money that has preceded it. We expect its value to accrete with advances in technology, expanding adoption, and the network effect that has fueled the rise of so many category killers in the modern era.

Then in October, Nasdaq-listed online payments processor Square (SQ) said it was converting $50 million in cash reserves to bitcoin.

Nick Giambruno is another bitcoin bull on the Legacy team.

And in the latest issue of The Casey Report (subscribers can catch up in full here), he laid out the case for why the rest of corporate America will follow suit. Nick…

Corporate America can simply no longer afford to ignore bitcoin. Governments are destroying their currencies at breakneck speed. Following the outbreak of the coronavirus hysteria, they’ve thrown out the last semblance of fiscal and monetary sanity.

The bitcoin megatrend is about people and corporations figuring out what works best to store and transfer value.

It just took MicroStrategy to break the taboo. Now there is an accelerating trend in motion. There’s more than $3 trillion in cash sitting in the treasuries of U.S. corporations. Bitcoin has a market cap of about $309 billion. If companies divert just a small slice of this cash to bitcoin, we’ll see an explosion in the price.

It’s not just companies that see bitcoin as an alternative store of value.

So do members of the U.S. Senate…

She invested in bitcoin back in 2013, following a tip from her son-in-law.

And experience as a state treasurer further hardened her view on bitcoin’s value. As she told ABC News on Friday…

I’m a former state treasurer and I invested our state’s permanent funds, so I was always looking for a good store of value, and bitcoin fits that bill. Our own currency inflates; bitcoin does not. Its 21 million bitcoin will be mined, and that’s it, it is a finite supply. So I have confidence that this will be an important player in store of value for a long time to come.

Even central bankers know the future of money is digital… and they’re playing catch-up. As I showed you here, that’s why they’re rolling out their own e-currencies.

This all means higher bitcoin prices…

Back to Teeka for more on that…

Right now, roughly 35 to 50 million Americans own crypto. That’s 10% to 15% of the population. The banking system touches the lives of over 300 million Americans. It holds north of $20 trillion in assets. And that’s just a tiny fraction of the $290 trillion global financial market.

As more people, businesses, and institutions warm up to crypto… we’ll see billions – even trillions – of dollars flow into crypto assets. So if you’re looking to invest in crypto, don’t wait for Wall Street… By the time it’s fully moved its clients into the sector, the biggest gains will be in the rearview mirror.

Instead, focus on investing small sums – about $200-$1,000 – directly into a few select cryptos before mass adoption takes hold. Bitcoin is a great choice if you’re just starting out.

I’m hugely bullish on bitcoin. But the smaller coins will have the biggest percentage moves higher. When the small coins start moving, they can boom 100,000% or more.

I’m running out of space here to go into detail on the opportunity ahead in these smaller cryptos. But you can find out more from Teeka on how to profit in the free replay of his Crypto Catch-Up event.