A bitcoin ETF is on its way for U.S. investors…

In Monday’s dispatch, I (Chris Lowe) put the launch of the first bitcoin ETF on your radar.

BTCC allows you to buy 100% physically settled bitcoin through your regular broker.

These ETFs allow millions of new investors – from regular folks to large financial institutions – to participate in the bitcoin bull market.

And as I’ll show in today’s dispatch, U.S. regulators will follow suit and greenlight other bitcoin ETFs.

As colleague and world-renowned crypto investor Teeka Tiwari put it to me, this is “super bullish” for bitcoin… and even more bullish for other smaller cryptos.

Bitcoin has become mainstream news in the wake of its rapid ascent to more than $50,000.

CNBC and Bloomberg quote its price daily along with prices for stocks, oil, gold, and other mainstream investments.

But we’ve been writing to you about crypto since long before the mainstream caught on.

Back then, hardly anyone in the mainstream press paid any attention to bitcoin.

If they did, the narratives were that it was “magic internet money”… a “fraud”… a “Ponzi scheme”… or something only criminals and anarchists were interested in.

Bitcoin was so fringe, Teeka had to work hard to get the go-ahead from the partners at Legacy to start adding cryptos to his recommended portfolios.

They were worried it was still too unproven an asset to recommend to our readers.

Fortunately, Teeka is a persuasive guy…

Especially when he believes he has a major profit opportunity to share with his readers.

And he eventually got the Legacy partners to agree to let him start recommending crypto.

To my knowledge, this was a major newsletter writer’s first move into crypto.

It paid off in spades.

And Teeka has knocked it out of the park with his other crypto recommendations, too…

But don’t worry if you’ve missed out on the profits from the crypto boom so far. Teeka believes we’re still in the early innings of crypto’s bull run.

That’s because we’re nowhere near full-blown mainstream adoption. And as Teeka has been writing about from the get-go, adoption is what drives prices…

The World Wide Web started out as fringe… something only a few “geeks and freaks” were interested in.

Today, it’s a major part of the economy… and the most valuable companies in the world are internet companies.

That’s why you could buy shares in Amazon.com (AMZN) at its initial public offering (IPO) in 1997 for $18 each.

Back then, there were just 40 million people online. 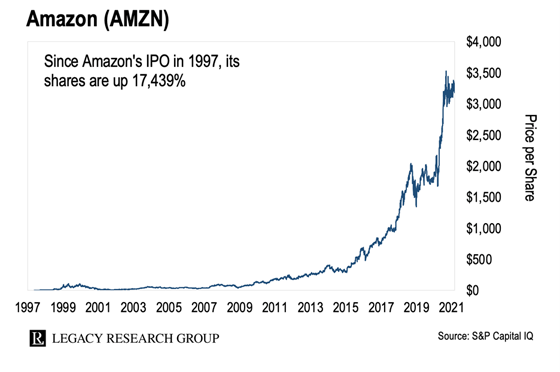 But still only a small fraction of investors own it or other cryptocurrencies.

According to a recent Twitter poll, just 14% of the 20,839 investors surveyed said they intended to buy bitcoin.

About 8 in 10 investors are still on the sidelines. They say now they’re not going to buy bitcoin.

That’s where bitcoin ETFs come in…

As I covered in Monday’s dispatch, ETFs (exchange-traded funds) are funds that trade on a major stock exchange like a regular stock.

It’s why the news that Canada has greenlighted bitcoin ETFs is so bullish. As these ETFs roll out… a new type of investor will be able to get involved.

Not everyone is comfortable buying bitcoins on an online exchange and then transferring them to a digital wallet to keep them secure.

But every investor knows how to click a button in their online brokerage account to buy shares in an ETF. They already do it all the time.

And a U.S. bitcoin ETF isn’t far away…

If it stays on the course it’s on right now, bitcoin is headed toward being a $2 trillion asset. The SEC can’t keep its head in the sand… and pretend this market doesn’t exist… forever.

And the incoming SEC chairman under President Biden, Gary Gensler, is a crypto expert.

He’s a professor at the MIT Sloan School of Management. And he’s taught a course there on blockchain and cryptocurrencies.

In short, Gensler understands crypto and has supported bitcoin for years.

It’s easy to see him greenlighting a U.S. bitcoin ETF… safe in the knowledge that it’s working out fine for investors in Canada.

Teeka says this is “super bullish” for bitcoin…

When I got to my desk on Monday and read Canada’s bitcoin ETF news, I immediately emailed Teeka about it. Here’s his response…

Hey Chris, it’s super bullish for bitcoin. The SEC will now have to approve an ETF or get left behind. That means you’ll start seeing bitcoin ETFs offered alongside more traditional ETFs to 401(k) workers.

About one-third of Americans – or 110 million people – have 401(k)s. On average, they put about 8% of their salaries into their 401(k)s each year. With the launch of bitcoin ETFs, a percentage of that cash pile will find its way into bitcoin.

And as Teeka has been showing his readers, that’s only the start of the financial innovation in crypto…

After a U.S. bitcoin ETF, we’ll see the launch of a broader crypto index fund. This will allow investors to buy a basket of the most valuable altcoins – crypto coins other than bitcoin – in an ETF package. That will be rocket fuel for the altcoins.

I haven’t seen Teeka as excited about the opportunity ahead in crypto since around this time last year, when he recommended his “Final Five Coins to $5 Million.” (A year later, the average gain on these five coins is 619%.)

If you haven’t already bought bitcoin, now is the time…

It’s easier than you think. Just go on an online exchange such as Coinbase or Binance and open an account. They allow you to fund your crypto purchase through your debit card.

Contrary to what a lot of people think, you don’t have to throw down nearly $50,000 to buy a whole bitcoin.

And if you already own some bitcoin and are looking for the next big opportunity in altcoins, tune in to Teeka’s “Tech Royalty” Summit tonight.

It’s all about a tiny crypto niche he believes will deliver some of the highest gains available in crypto today.

For instance, the average gain among the “Tech Royalties” he’s recommended to his subscribers so far is 543%. In addition to those gains, they’ve received annual royalties averaging 10%.

And this trend is only getting started. In 2021, Teeka expects “Tech Royalties” to pay out $2.3 billion.

In the mailbag: Watch Bill Bonner try to buy bitcoin…

On Monday, Legacy Research cofounder Bill Bonner served up a treat from the archive for readers of his Diary e-letter.

Although Bill’s kids have successfully invested some of the Bonner family money into bitcoin and other crypto… Bill remains skeptical.

As he wrote recently of the bitcoin boom…

When otherwise sane and sensible people begin to wager on a project with “no measurable substance,” the hammer cannot be far away.

Bitcoin is a great hedge. The Fed cannot print it. And it’s a hell of a lot more liquid than gold. When you sell bitcoin, the fee is pennies compared to the premium you are charged for selling physical gold.

Throw away your rotary phone and your beeper and get on board, grandpa!

Bill, you need to educate yourself a little more on bitcoin. It is the purest and most perfect monetary network.

Math and science do not lie. Millennials will inherit $67 trillion from their baby boomer parents in the next few years. Millennials favor bitcoin over gold by over 95%.

Less than 2% of the world’s population owns bitcoin now. We are still in the early adoption stage.

Is Bill’s skepticism of bitcoin justified? Or is the crypto headed higher, as Lloyd and Ruban foresee? Chime in at [email protected].