Bitcoin has blasted through $50,000 for the first time… 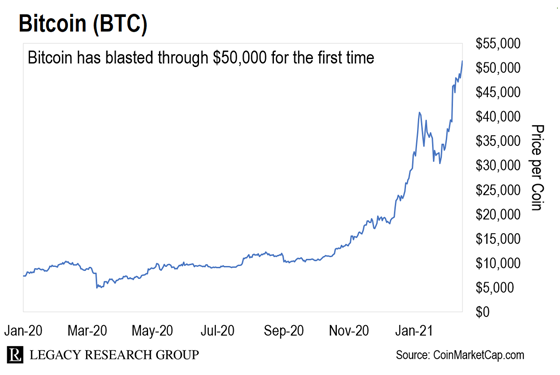 As I type, the world’s first and most famous cryptocurrency sells for $51,076.

Those are jaw-dropping wins for folks who acted on the recommendations of colleagues Teeka Tiwari, Jeff Brown, and Nick Giambruno… and bought bitcoin before the big run-up.

If you’re one of them… kudos. You invested in a market megatrend ahead of the crowd. You’re now reaping the reward for your foresight and perseverance.

And we’re still only at the start of what’s shaping up to be the mother of all bitcoin rallies.

So if you still haven’t taken the plunge and bought some bitcoin… don’t worry.

As Teeka has been showing his readers, bitcoin is on course to hit $200,000 this year… nearly 300% higher than where it trades today.

First, a quick look at the story so far…

Longtime readers will have a good idea how we got to $50,000 bitcoin. But for folks who are new to the conversation, here’s a run-through of the basics…

In October 2008, someone (or a group of people) calling themselves Satoshi Nakamoto created bitcoin.

Nakamoto wanted to create a purely “peer-to-peer” – meaning person-to-person – version of electronic cash. This would allow for “online payments to be sent directly from one party to another without going through a financial institution.”

And Nakamoto’s digital cash has been catching on…

Below is a table of bitcoin’s returns each year since 2010. That’s when we started to see the first quoted bitcoin prices.

And over the decade, bitcoin has delivered a 370% compound annual growth rate. That’s the rate of return assuming you reinvest your profits at the end of each year.

With these supersized returns in the rear-view mirror, I get why you may think now is too late to profit. It’s psychologically difficult – painful even – to invest after such a massive run-up.

But as I keep writing to you about… that’s a huge mistake. Despite these already massive gains… the bitcoin rally is still in its early stages.

It’s all down to mainstream adoption…

He first recommended bitcoin to readers of our Palm Beach Letter and Palm Beach Confidential advisories in April 2016… when one bitcoin traded for $428.

As Teeka has been hammering on for nearly five years now… the single biggest driver of bitcoin’s price is its adoption by the mainstream – especially Wall Street and corporate America.

That’s why he’s always told his followers to ignore the day-to-day moves and focus on the big picture.

And the big picture is that bitcoin is going from a relatively small market to a massive market.

When that happens to an asset… the profits can be enormous.

Mainstream adoption was the big driver for both these stocks.

As more people started to use the internet to search and buy stuff… profits and shareholder value soared.

The same thing is now playing out with bitcoin…

A decade ago, bitcoin was something only computer geeks and hardcore libertarians were interested in.

I know because from 2008 to 2010, I was working with Legacy Research cofounder Bill Bonner in Buenos Aires, Argentina. And one of my colleagues – a guy called Joel Bowman, who wrote a libertarian newsletter– set up a bitcoin mining rig in the office foyer.

Back then, you could “mine” new bitcoin (provide computing power to the network in return for newly issued bitcoins) with a regular PC.

Hardly anyone used bitcoin. So so you didn’t have to compete with other miners who had ultrahigh-speed computers, like you have to today.

And because hardly anyone used bitcoin, it wasn’t worth much.

The first transaction was in May 2010. That’s when a software developer by the name of Laszlo Hanyecz paid for two pizzas using bitcoin.

Fast-forward to today, and 10,000 bitcoins is worth more than $510 million. That’s enough to sign star football quarterback Patrick Mahomes to a 12-year contract. It’s also enough to buy out casual dining chain Red Robin (RRGB)… and still have $85 million to spare.

Why the surge in bitcoin over the past 10 years?

It’s really simple… Bitcoin is no longer an asset only “geeks and freaks” own.

For instance, large U.S. corporations are now snapping up bitcoin to the tune of billions of dollars. Teeka…

For nearly five years now, I’ve been betting institutions will embrace bitcoin as a legitimate asset. Today, that bet is paying off in spades…

Last week, electric car maker Tesla (TSLA) announced it had bought $1.5 billion in bitcoin. It also said it would accept bitcoin as payment for its cars. This is the first time an S&P 500 company has put bitcoin in its treasury.

And don’t forget… Tesla is the sixth-largest U.S. company in market value. It’s worth more than $780 billion. It’s also one of the most influential companies. So this is a huge endorsement for bitcoin by corporate America.

Just how bullish is this development? Teeka again…

For my readers who were with me back in 2016 and 2017… we lived through individual FOMO (fear of missing out). Individual investors drove the bull market by rushing into bitcoin. That pushed bitcoin to $20,000.

Now we’re living through institutional FOMO. Money managers are scared to death their clients will fire them if they don’t own any bitcoin. That’s why under an institutional FOMO scenario, bitcoin could potentially hit $200,000 this year…

I’ve talked with you about this before… but it’s worth emphasizing.

And the profit on Tesla’s $1.5 billion bitcoin buy is already nearly $1 billion.

It’s a similar story for software maker MicroStrategy (MSTR). Starting last August, it converted $1.5 billion to bitcoin in several transactions with purchase prices of $11,111 and $21,925. Those bitcoins are now worth $3.6 billion… or $2.5 billion more than the company paid for them.

If you think other folks in corporate America aren’t insanely jealous of those gains… you don’t understand how the corporate world works.

The higher bitcoin goes… the more intense their FOMO becomes… and the more corporate dollars flow into bitcoin.

This causes bitcoin to gain even more value versus the dollar… which keeps the cycle going.

Don’t just take it from me…

5% of them said they planned to hold bitcoin as a treasury asset this year.

And 7 out of 10 of the execs said one of the top things they’d like to know is what other execs are doing with bitcoin.

It’s playing out just as Teeka predicted. Here’s what he told his readers in December, when bitcoin was trading for about $19,000…

Bitcoin’s limited supply – there can only ever be 21 million bitcoins – means anyone who wants bitcoin will have to buy from people who are willing to sell. Well, guess what? Once you cross $20,000, anybody who wanted to sell has pretty much sold. And when surging demand meets restricted supply… prices have to rise.

So if you haven’t already, now is still a good time to get in…

It’s hard to believe after the 370%-a-year run bitcoin has had over the past decade. But folks who get in now still have a shot at those kinds of gains.

And remember, you don’t have to fork out $51,076 for a whole bitcoin. You can invest as little as you want for fractions of a bitcoin (known as satoshis).

For more on how to buy your first bitcoin, check out our free special report here.

And bitcoin isn’t even the most profitable opportunity Teeka sees in the crypto space.

He believes one of the best ways to build a fortune is in something he calls “Tech Royalties.”

That’s why, if you haven’t already marked it in your calendar, I encourage you to tune in to Teeka’s “Tech Royalty” Summit next Wednesday at 8 p.m. ET.

During this free event, Teeka will show you exactly what “Tech Royalties” are… how they work… and which ones to avoid.

As a bonus, he’ll give you the name and ticker of his No. 1 long-term “Tech Royalty” just for attending the summit. Go here to reserve your spot now.