America is on the road to unfreedom… The Fed’s gift to the eat-the-rich brigade… Take these two steps now to shield your wealth… In the mailbag: “We certainly could spend ourselves into oblivion”…

In his State of the Union Address last night, he said, “America will never be a socialist country.”

Here, in the United States, we are alarmed by new calls to adopt socialism in our country. America was founded on liberty and independence – not government coercion, domination, and control. We are born free, and we will stay free.

As Legacy Research cofounder Bill Bonner pointed out earlier today over at his daily e-letter, you don’t expect honest insights from a State of the Union Address… no matter who’s giving it.

But this was a bit of especially conceited claptrap. As Bill put it, “The country is already heavily socialized, with about half its output directly or indirectly controlled by the feds.”

And it didn’t just happen overnight. As we showed you yesterday, America has been embracing many of the principles of socialism for more than a century.

They’re milestones on America’s long road away from free markets and toward state control of the private economy – what you might call the road to unfreedom.

As we covered in detail yesterday, this road was marked by three government power grabs.

The first was in 1913, when Congress established the Federal Reserve and made a tax on income a permanent fixture of the tax code.

Then, in 1934, Congress banned U.S. citizens from owning gold. And in 1937, President Roosevelt bullied the U.S. Supreme Court into passing his New Deal programs.

And 1971 was the year President Nixon drove a stake through the heart of the gold standard… and gave birth to what Bill calls the “phony credit-money” system.

These are all ways of taking control of money and wealth to extend political power.

The power grab isn’t over…

Part of the Fed’s response to the 2008 financial crisis was to raise stock prices by way of churning out newly created cash.

The fancy term is “quantitative easing” (QE). Between 2008 and 2014, the Fed created nearly $4 trillion in U.S. dollar cash that didn’t exist before and pumped it into financial markets.

The idea was to create something Fed wonks call the “wealth effect.” The theory goes as follows…

All that newly created cash would pump up stock prices. This would make stockholders richer… cause them to go out and spend that extra dough… and in turn lead to economic growth.

At least the first part of the plan worked. 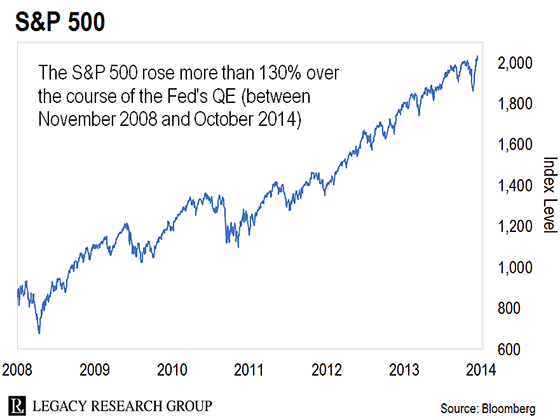 The only catch was that the lion’s share of those gains went straight to the already rich stockholders.

Only 52% of Americans own stocks…

That means roughly 1 in 2 Americans saw no gains from the Fed’s manipulation of the stock market.

Even among the folks who do own stocks, most of the Fed’s manipulated gains went to the ultra-wealthy.

QE overwhelmingly benefitted the rich, in other words. And that’s kicked open the door for a soak-the-rich tax policy.

Of course they [the Democrats] will raise taxes. It’s time to eat the rich. But, perversely, many of the rich will deserve it, since many made their money as cronies during the long inflationary boom.

As regular readers know, Dan’s been keeping a close eye on America’s road to unfreedom over at The Bill Bonner Letter.

He says the Fed’s QE was the catalyst for a new power grab by the feds. Dan…

QE made these tax proposals seem like a fair response to a policy that made the rich richer.

The mythology of the U.S. is that you should be able to keep what you earn. But that’s now just a nostalgic view of how the country used to work. Today, Americans are much more aligned with the collectivist principles of socialism.

Under the guise of fairness, equality, and social justice, the feds are coming after ALL your wealth. You’d have to be a willing fool to not see it coming.

What can you do to protect your wealth?

There’s no perfect answer. But Dan has been researching solutions for our Bill Bonner Letter readers. And he has some ideas.

It starts with what Dan calls “situational awareness”…

The first step is to think about where you’re based… and where that place is on the spectrum between socialism and free-market capitalism.

Capital is, for now, mobile. But as America advances down the road to unfreedom it will be harder for you to move your money from high-tax jurisdictions such as New York, Connecticut and Illinois to a low-tax jurisdiction such as Florida, Texas or Wyoming.

There may be an exit tax, for instance, like there already is if you try to give up your U.S. citizenship and pay your taxes overseas. Or there may be capital gains from selling your home and buying one in another state. Or if you want to move your bank account from one state to the other, there might be some moratorium.

We tend to think of capital controls as blocking the movement of capital between national borders.

But as state and local governments run into trouble with their finances, they won’t hesitate to slap restrictions and taxes on folks who want to move from one state to the next.

In short, reduce the part of your wealth you hold in financial assets such as stocks and bonds, and increase the part you hold in tangible assets.

That could be farmland, real estate, precious metals… even collectibles such as stamps and rare coins.

Dan recommends collectibles that are at the same time beautiful and valuable.

For instance, he owns a 20mm bullet that’s made from pure silver. He also owns an old Navajo rug, now a collector’s item, that used to hang on the wall of his grandmother’s house in Colorado.

Where you go or what collectibles you buy is up to you.

What’s important is that you’re living somewhere that is as aligned with your beliefs as possible… And that all your wealth isn’t tied up in paper assets the government can easily tax or confiscate.

If Dan is right – and America is headed further down the road to unfreedom – you’ll be glad of it later.

In the mailbag: “We certainly could spend ourselves into oblivion”…

We’re not the only ones at Legacy who are paying attention to the rise of socialism in America.

Last Friday at our Palm Beach Daily e-letter, colleague Nick Rokke asked if AOC is the most dangerous woman in America. And emails like the three below have been pouring in for him since.

In particular, readers are worried that AOC and others on the left have latched onto Modern Monetary Theory, or MMT. If you missed Nick’s essay, here’s a quick recap…

MMT is a little-known academic theory about how the fiat money system operates. Its advocates point out that the U.S. government is the monopoly issuer of the U.S. dollar. So, although it could create inflation by creating too many dollars, it can never run out.

(For a primer on MMT by the former banker and hedge fund manager Warren Mosler, who pioneered this way of thinking about money, read on here.)

MMT is a disaster. I actually own gold and have done so for a while. But what makes you think that people in power who are cheerleading for MMT won’t confiscate gold when their utopian socialist dreams come crashing down like they’ve always done? FDR, anyone?

The thought of these lunatic socialist Democrats taking control of this country scares me to death. Ocasio-Cortez is as crazy as they come! She answers questions by spouting big words and trying to sound intelligent. She’s not.

Ocasio-Cortez thinks she’s pulling a fast one by telling people how her policies would help minorities, how the government should pay for college, and how MMT should replace the free-market system. But this is all just to create a citizenry that’s dependent on government.

These socialists may fool many millennials, but there’s a group larger than that who are well-informed and understand just how destructive their policies are to this country.

Nick, I appreciate your “alarm” about MMT. But what’s really different from what AOC is proposing and what our politicians have been doing for decades?

Printing money to control the economy and its people isn’t new… Now, it’s just coming from an “outsider” and a younger generation. I agree with the gold recommendation, though.

Meanwhile, another Tesla owner shares her experience with the new Model 3…

I have owned a Tesla Model 3 for about six months now. I bought it because I do a lot of driving for my job and wanted to be more environmentally friendly. At the time, the Tesla was the only electric car that had a range of over 300 miles.

For the most part, I enjoy driving the car. I have the basic model + extended battery + Auto Pilot. In CA where I live, I also was able to get stickers to drive solo in the carpool lane. I am amazed at the speed and acceleration of the car. One of my friends remarked it was like being on a Disneyland ride when I showed her what it could do.

The autopilot upgrade has been the best $5,000 I’ve ever spent. It enables me to take my foot off the accelerator and brake pedals in bumper-to-bumper traffic and will even steer the car for me, if I like.

The only negative experiences I have had have been centered around its customer service. It is almost impossible to speak to a real person, and trying to get a simple repair can take weeks. Its repair facilities are totally overwhelmed!

Have you heard of MMT? If so, what’s your take? Could it be a force for good? Or is it going to be the ruin of America? Here’s that primer again.

And don’t forget to share your stories about owning and driving a Tesla.

Write us at [email protected]. We love getting your feedback.