Chris’ note: Stocks have been in a slump lately. The S&P 500 has now fallen for four straight weeks. And the tech-heavy Nasdaq has fallen for the past three. It’s now down nearly 20% for the year.

This year’s market is a lot different from the one we experienced in 2020 and 2021, when stock kept climbing higher. And that’s before we talk about today’s soaring inflation, rising interest rates, fractured supply chains, and war in Eastern Europe.

Colleague and former hedge fund manager Teeka Tiwari says stocks will head even lower from here. But he’s not worried about a long-term bear market. In fact, below, he urges you to use this temporary weakness to pick up quality stocks at bargain prices…

Friends, I’ll always tell it how it is.

When things look bad, I won’t hide under a desk to avoid you… block your emails… or ignore your questions.

No matter what the market throws at us, I’ll give you straight talk.

And right now, I have some bad news about stocks.

Based on the numbers I’m looking at… it’s likely the broader market will head lower.

The Federal Reserve is raising interest rates. Inflation is at 8.5% over the past year – the highest it’s been since 1981.

The market has already priced in those negatives. So it’s no surprise the S&P 500 is down more than 12% since the start of the year.

But I believe the market has yet to price in the next round of corporate earnings. If they guide lower than last year, equities could dive even further.

Even with the current pullback, the S&P 500 is wildly overvalued at 24x earnings. The Nasdaq is nearly the same at 23x earnings.

So the slightest bit of bad news could cause the indexes to revisit their 2022 lows… and probably break below them.

This confirms my February prediction that we’re in a “cyclical” bear market.

Now, don’t let this scare you. A cyclical bear market is much different from a “secular” bear market.

Secular markets are long-term one-way moves that generally last between 12 and 20 years.

But the average recovery time to new highs was just 11 months. So I’m not worried now.

We need cyclical moves lower to reset the market for its next massive move higher.

And if you have the right perspective, cyclical bear markets are a chance to make boatloads of money.

In 1994, when I worked on Wall Street, I saw a market bloodbath like what we’re seeing today.

It was a nightmare.

Those days, brokers like myself got stock data from a Quotron. It was a machine that displayed up-to-the-second securities prices.

My Quotron screen of several hundred stock listings was a sea of red.

I was 22 at the time, and it felt like the end of the world.

But nearly 30 years later, this market experience gives me perspective.

I realize what happened from 1994 to 1995 wasn’t the start of a secular bear market. Instead, it was a short-term change in market sentiment from positive to negative.

But people were scared the Fed would get too aggressive raising rates and put us in a recession.

Of course, that didn’t pan out. And market sentiment brightened again in 1995.

In my opinion, that one-year cyclical bear market was the best buying opportunity of the decade. Risk was lowest and the reward was highest.

We weren’t headed toward a recession. We were on the cusp of massive technological adoption. 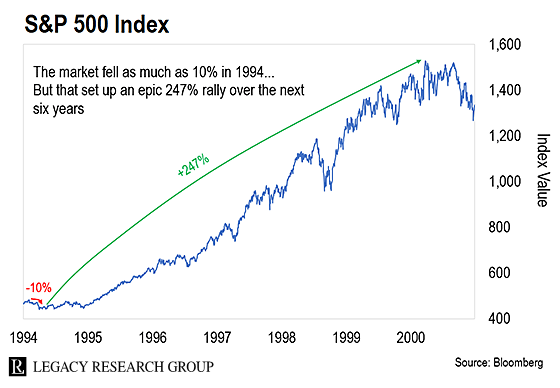 So today, I’m giving you the benefit of my three decades of market experience – from managing money as a broker to running a hedge fund.

And I’m telling you… the current market setup is 1994 all over again.

But the end of the world? NO.

Those who kept their wits and made the right moves from 1994 to 1995 were positioned to play an epic five-year rally after the pullback.

Friends, the takeaway is simple…

If you believe we’re in the middle of a long-term secular bull market – as I do – you should use any cyclical weakness to buy blue-chip stocks and world-class assets when they’re cheap.

Start with high-quality companies that pay superior yields. The NYSE is full of blue-chip names paying 4% dividends right now. And in the crypto space, consider allocating up to 10% of your portfolio to bitcoin (BTC).

Even if these assets weaken more and your timing is less than ideal, the market will bail you out over the long term.

You don’t need a team of Ivy League economists… geopolitical experts… or talking heads in times like this.

All you need is the conviction that you’re buying world-class assets for cheap during a pullback within a long-term bull market.

Your Shot at Bigger Returns

Safe, blue-chip assets are one of the best ways to profit through volatility. But your returns don’t have to stop there.

You can take your blue-chip income and put some of it into what I call “asymmetric trades.”

These give you explosive upside potential without risking your current lifestyle. They can turn $1,000 into $10,000… $100,000… or even $1 million. And your steady blue-chip income stream will replenish any losses.

A one-time market event is about to trigger a historic panic… and create this kind of opportunity in a select handful of cryptos.

These special cryptos can make gains of 3x, 5x, 10x, and more. On top of that, they generate income with annual yields as high as 300%.

That’s why last week, I held a special briefing called The Coming Crypto Panic. There, I issued the most important warning of my career.

I explained how the coming crypto panic won’t be a sell-off… and why following my panic playbook could bring you generational wealth.

You can watch the replay here… but do it soon.

It won’t be available for long. And when this crypto panic starts in the next few months, it’ll be too late to position yourself for the biggest rewards.