Talk about a great TV moment…

In January, Antiques Roadshow viewers watched the delight on a Vietnam vet’s face when he found out the unworn Rolex Daytona watch he bought in 1974 for $345.95 at a military base exchange is today worth up to $700,000.

And Rolexes aren’t the only luxury Swiss watches shooting up in price.

A 2020 survey by insurance firm Chubb revealed how a surging second-hand market had a Patek Philippe Nautilus selling for triple its retail price.

What do these investments have in common?

They’re great ways to grow your wealth outside of stocks and bonds… especially when inflation is running hot.

Having a gameplan to beat inflation is critical right now…

That’s the highest level it’s been in 40 years.

And it’s been hammering stocks and bonds.

And it’s been one of the worst years for bonds in history.

Inflation eats away at the buying power of the income payments bonds pay out. And when a bond matures you get back what you paid for it, without any compensation for inflation’s wealth-eroding effects along the way.

The effect of inflation on stocks is harder to parse out. But we know stocks tend to do worse when inflation is rising than when it’s falling.

A study by Ben Carlson of Ritholtz Wealth Management showed that from 1928 to 2021, the S&P 500 returned an annual average gain of 5.5% during times of rising inflation.

That’s roughly one-third the average annual gain of nearly 15% when inflation is falling.

And when inflation is running at 8.3% even a 5.5% return means you’re going backward in terms of your buying power.

That’s where Maverick investments come in…

Teeka took the name from the Top Gun movies. As he explained it to his readers…

A maverick is an unorthodox, independent-minded person. The first person who comes to mind is Tom Cruise’s character from Top Gun, Lieutenant Pete “Maverick” Mitchell. He goes his own way. He’s free-thinking. He doesn’t follow the crowd. Because of that, he’s successful.

That’s the mindset you need to survive this inflationary market. But you won’t find maverick ideas on Wall Street. Maverick investments exist outside the standard portfolio model, which focuses on stocks and bonds.

Unlike stocks and bonds that struggle during inflationary cycles, Maverick investments grow more valuable during these times.

Inflation happens when governments and central banks create too much money. Maverick investments, by contrast, are scarce. They can’t be faked or artificially inflated. And people who own them know they’ll always find willing buyers.

That helps them keep their value relative to rapidly inflating currencies.

The returns on contemporary art are proof of this…

One index looks at artworks made after 1945 that have sold at least twice at public auction.

On average these artworks have grown 13.5% in value per year in inflationary periods. 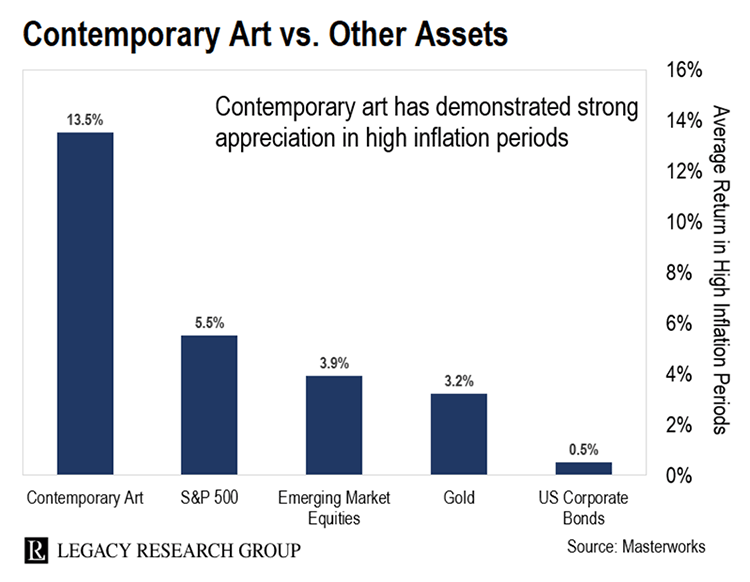 And you don’t have to be a millionaire to invest in contemporary art.

You can now buy shares in iconic paintings…

One platform Teeka recommends is Masterworks…

Scott Lynn, a tech entrepreneur and art collector, founded the company in 2017.

His goal was to make investing in iconic artworks possible for everyday investors.

It buys and securitizes artworks. This allows you to own shares in a Picasso, a Rothko, a Basquiat, or any of the other blue-chip masterpieces that make up the Masterworks portfolio.

Over the past five years, Masterworks has bought more than 130 works of art for more than $500 million.

And since then, the value of its art portfolio has risen at an average rate of 15.3% a year.

That’s an inflation-beating return… even at today’s inflation rate of 8.3%.

And roughly three times the average annual return for stocks in times of rising inflation.

There’s usually a waitlist to join Masterworks. But as a Daily Cut reader, you can skip that waitlist here.

You’ll get access to this inflation-beating asset class without having to spend millions of dollars to acquire art.

I recently sat down with Scott to learn more about how Masterworks creates shares in artworks… why contemporary art is a great way to diversify outside of stocks and bonds… and how art appreciates in value independent of inflation.

Members of our premium research advisory, Legacy Inner Circle, can catch the video recording of my Zoom call with Scott here.

And if you’re not a Legacy Inner Circle member, don’t worry. I’ll share part of my conversation with him in tomorrow’s Daily Cut.

There he’ll reveal a huge turnaround coming that’s left him wildly bullish on crypto in 2022. It could make life-changing fortunes for investors who are prepared for it.

He’s calling it the “Crypto Comeback.”

It has to do with a unique area of the crypto market that only a handful of investing giants are even aware of… and has nothing to do with Ethereum’s Merge or a bitcoin halving.

Tonight, he’ll explain what’s happening… what you need to do… and how just a handful of $250 crypto investments could return a five-figure monthly income if you get ahead of it.

He’ll even give you his No. 1 crypto pick, just for attending.

This Crypto Comeback window won’t be open long. So make sure you go here to reserve your spot for tonight… and come prepared with any questions you might have.