The world’s first cryptocurrency slid as much as 7.4% this morning.

That’s its lowest level since the collapse of crypto lender Celsius in June.

Bitcoin’s slide comes ahead of a wave of monetary tightening from central banks hoping to combat inflation.

And in the U.S., investors widely expect the Fed to announce its third three-quarter-point hike in three months. That will lift the Fed’s rate to 3.25%. And Fed research shows rates heading north of 4% by next year.

That would be the highest level in 15 years.

So today, we’ll look at how worries over higher rates are sending bitcoin tumbling.

We’ll also look at why colleague Teeka Tiwari says this short-term volatility is a great buying opportunity for long-term investors.

It said higher prices were due to snarled supply chains choking off supply… and not Fed and government stimulus pushing up demand.

So investors didn’t worry about the Fed raising rates to try to curb inflation… as long as it was transitory.

But last November, with the annual inflation rate climbing to 5%, the narrative started to shift.

And the rest of the crypto market fell with it. Over the same time, investors have wiped out about two-thirds of its value.

That’s going by the tech-heavy Nasdaq. It fell along with bitcoin after the Fed’s pivot on rates. Take a look… 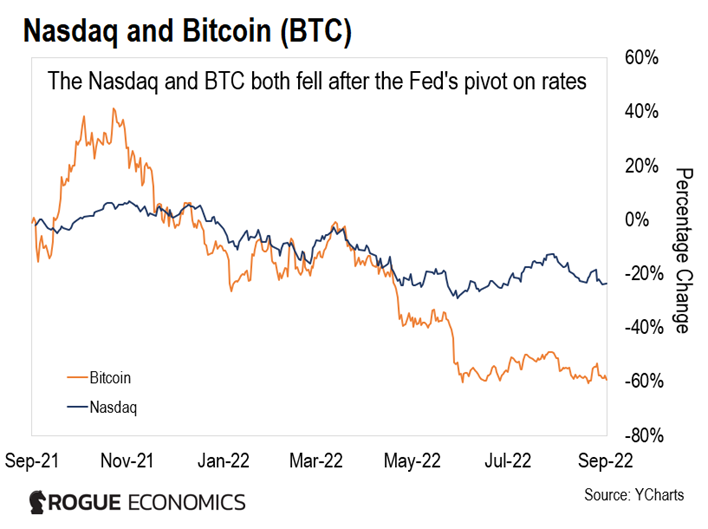 Why did tech stocks fall along with crypto?

When interest rates rise, cheap liquidity dries up. And risk-on investments such as tech stocks drop. That’s a major reason the Nasdaq is down 27% since the start of the year.

Right now, investors are treating bitcoin as though it were a tech stock. And since the market views tech stocks as high-risk assets, bitcoin is moving lower in tandem with the Nasdaq.

If you believe what the market believes, bitcoin and tech stocks will fall further as interest rates keep rising.

But what if investors are wrong to view these two different asset classes through the same lens?

He first recommended bitcoin to his readers in April 2016, when it traded at just $375.

Folks who acted on that recommendation are up about 5,175%… despite the recent plunge.

All along, he’s had the same message…

Bitcoin is a purely digital currency. But it shares the characteristics that make gold money sound.

Each new bitcoin is costly to mine thanks to the complex and energy-intensive math problems “miners” have to solve. And it’s scarce. There will only ever be 21 million bitcoins in existence.

That means, unlike the dollar and other fiat currencies, governments and their central banks can’t balloon bitcoin’s supply. And as a digital asset, it has a modern advantage over gold.

You can send bitcoin to anyone anywhere in the world 24/7, 365 days a year… in minutes. That makes bitcoin more suitable than gold for the digital age.

Like gold, bitcoin will eventually serve as a reserve asset. We’ve already seen individuals and corporations plug their balance sheets into bitcoin. Over time, governments will do the same thing.

But most investors don’t see bitcoin that way. Instead, they put it in the same category as a high-growth Nasdaq tech stock. So they’re dumping bitcoin along with their tech stocks into the Fed’s rate hiking cycle.

In other words, the more investors who understand the crypto’s potential… the more bullish it is for bitcoin.

For most of my adult life, I’ve seen gold as the ultimate form of sound money. And if you’re my age, or older, you probably feel the same way.

One study from deVere Group, an independent financial advisory, reported that more than two-thirds of millennials prefer bitcoin to gold as a safe-haven asset.

And the U.S. Census Bureau figures reveal millennials make up about 22% of the population. And Gen Z – the group behind the millennials – makes up another 20%.

That’s a huge chunk of investors who’ve no loyalty to gold… and are likely to buy bitcoin instead.

Wall Street legends such as Paul Tudor Jones, Bill Miller, and Stanley Druckenmiller have invested in bitcoin because they view it as sound money.

And the rest of Wall Street isn’t far behind.

Just last month, BlackRock – one of the world’s largest asset managers – announced it was entering the crypto market.

The company’s institutional clients desperately want access to this market. So BlockRock has teamed up with Coinbase to provide them an access point to crypto assets.

And as Teeka has been spreading the word on, BlackRock’s institutional clients collectively manage about $40 trillion.

Right now, bitcoin is a $350 billion asset. So if just $1 trillion of that institutional wealth flowed into bitcoin, we’d be talking about a bitcoin price of $55,000.

Back to him for more on that…

Rather than grasping this is a temporary ailment that will repair itself… they’re dumping their bitcoin. It’s like amputating a limb because of a scratch.

You should view this pullback as a buying opportunity. I know I sound like a broken record. But buying world-class assets at discounts is how you profit from volatility.

Don’t plonk a big amount into bitcoin all at once. Teeka is long-term bullish on bitcoin. But he sees plenty of volatility over the short term.

That means prices could go even lower from here before they start trending upward again.

Instead, Teeka recommends you use something called dollar-cost averaging to build your position.

Set aside a fixed dollar amount each month. It can be as low as $50 or $100. And use it to buy some bitcoin, no matter what the market’s doing.

If you do that consistently… and hold for the long term… you’ll come out of this sell-off richer than you were when you entered it.