It was the worst week for U.S. stocks in half a year…

The spread of coronavirus out of China is the easiest story to tell for why stocks are dropping. So that’s what the mainstream press is focused on.

But as I (Chris) have been showing you, the press tends to overhype the effects of these outbreaks. Besides, there are good reasons outside of the deadly virus outbreak to stash some money in safe havens.

Last Monday we looked at one of them – overly bullish sentiment. Today, we’ll look at three other warning signs – nosebleed stock market valuations, a recession signal from the bond market, and the rise of gold.

This is not a reason to panic. There are still plenty of speculative opportunities out there. But it’s vital you play defense as well as offense in your portfolio.

If you’re just joining us… welcome aboard!

Our mission at The Daily Cut is to put you ahead of major market trends – early on – so you can profit and protect your wealth.

We do that by plugging you into the latest ideas, insights, and recommendations from Doug Casey, Bill Bonner, Teeka Tiwari, Jeff Brown, E.B. Tucker… and the rest of the Legacy Research team.

Typically, these are trends the mainstream has overlooked or misunderstood. And they often run counter to what you see on CNBC… or read in The Wall Street Journal.

But as Legacy Research cofounder Bill Bonner likes to remind readers, to beat the crowd, you have to think differently from the crowd. So running counter to mainstream opinion is a badge we wear with pride.

There are dozens of ways to value a company’s shares. One of the simplest is to look at its share price relative to the sales the company rang up over the past 12 months. 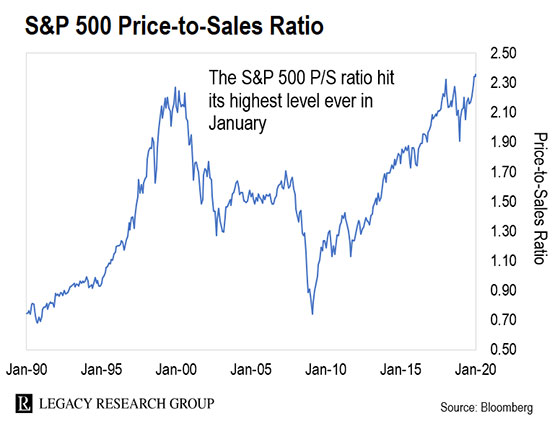 As you can see, in January, the P/S ratio for the S&P 500 hit its highest level ever.

And that didn’t end well. After the P/S ratio peaked at 2.36 in March 2000, the index fell 49% before bottoming three years later.

There’s also a new recession warning from the bond market…

You’ve probably heard of the inverted yield curve by now.

It looks at the “spread” – or gap – between the yield on the 3-month Treasury bill and the 10-year Treasury note.

When investors are optimistic about the future, the yield on the longer-dated bond is higher than on the shorter-dated bond.

And every time this relationship has inverted over the past 30 years, a recession has followed within the next 18 months.

That’s what makes the next chart so important. It’s of the yield curve back to the start of last year. 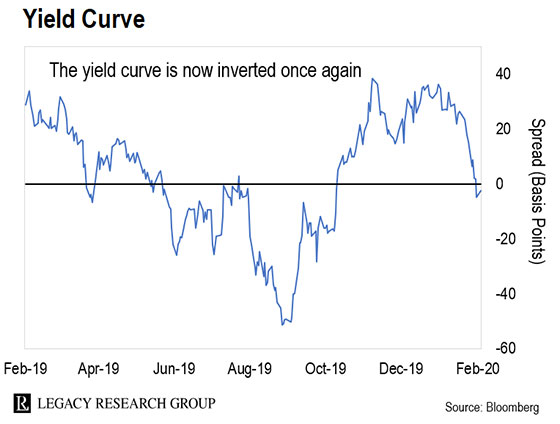 As you can see, the yield curve was inverted all last summer. It then recovered as U.S.-China trade war tensions eased. Then, it went positive again last October.

That’s not a guarantee a recession is coming. But it’s as solid an early indicator as you can find. And it’s flashing red.

The third warning is from the gold market…

As we’ve been showing you, gold is the ultimate disaster meter.

We saw this last after the 2008 financial meltdown.

And as you can see below, gold is now hovering near a seven-year high.

That’s consistent with what you typically see when investors fear low economic growth… and falling stock prices ahead.

These three indicators are saying the same thing…

We’re nearer to the end of the bull market than the beginning.

To the folks in the mainstream press, it seems like the wobble in stocks is all about coronavirus. Because the two things are happening at the same time.

But as we showed you last week, stocks tend to follow their own logic.

When prices are high… and the crowd turns bullish… that’s when stocks find an excuse to fall.

That’s why, today, I’m continuing my crusade to spur you into action…

If you haven’t already, take the time to make sure you have a mix of offensive and defensive assets on board.

You don’t want to end your quest for life-changing profits… but you do want to make sure your wealth is on a solid foundation.

A good rule of thumb is to set aside 10% of your portfolio for speculations. These are where you swing for the fences in cryptos, legal cannabis stocks, private and early-stage stock deals, and disruptive tech stocks.

You want the bulk of your wealth in quality stocks you hold for the long run… cash… and gold.

These should be investments you’re happy to hold through good times… and bad.

The exact mix will depend on how much loss you can stomach in a downturn. The main thing is limiting the amount of money you put to work on speculations.

That way, you can still aim to knock the lights out with these riskier bets without it ever eroding your solid foundation of wealth.