When all the forecasters agree, something else is going to happen…

That insight comes by way of investing legend Bob Farrell.

Over that time, he had ringside seats to nine bear markets. Each of them gave way to a new bull market. And Farrell gained a reputation on Wall Street for identifying those inflection points.

So, his contrarian insight is worth keeping front and center as we head into the new year.

Almost all mainstream forecasters predict more doom and gloom in 2023.

But as Farrell learned, it pays to go against the crowd in times like these.

So today, we’ll look at three reasons to be an optimist in 2023. And I’ll show you why now is actually a great time to buy stocks.

Reason for Optimism No. 1 – Inflation has peaked…

It tracks prices for a range of goods and services. These include rents, health care and education costs… as well as food, energy, and transport costs.

Last Thursday, the government released the CPI reading for December.

It showed that inflation has cooled significantly from the June 2022 reading, around the peak of this inflation cycle.

It’s all in this next chart. It shows the 3-, 6-, and 12-month inflation rates last June versus last December. 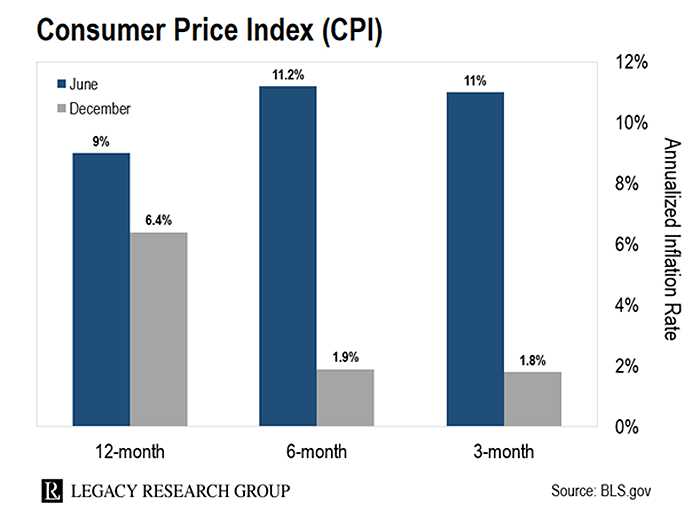 As you can see, inflation is down across all three time frames… And it’s down a lot over the past 3- and 6-month periods.

Why does falling inflation matter?

Much of the plunge in stocks last year was a reaction to rate hikes from the Fed.

Since last March, when it began hiking rates, the Fed has brought its target rate from 0.5% to 4.5%.

That’s the fastest pace of rate hikes in U.S. history.

If inflation has peaked, the Fed no longer has to crush the economy… and the stock market… with higher rates.

But don’t just take my word for it.

The next chart shows that stock market valuations and inflation mirror each other. 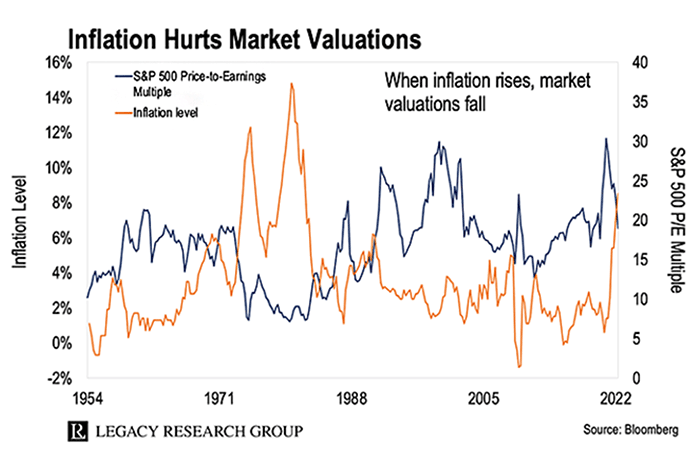 You’re looking at the price-to-earnings (P/E) ratio for the S&P 500 (blue line) and the annual inflation rate (orange line).

That leads us to our second reason for optimism…

Reason for Optimism No. 2 – Junk bonds are rallying…

Junk bonds are corporate bonds that carry a high risk of default.

That makes them useful weathervanes for how investors are feeling about risk.

If they’re worried about a recession, they flee junk bonds and seek out the relative safety of Treasurys. If they’re more optimistic about the future, they rush back into junk bonds to capture those higher yields.

Over the past 12 months, the iShares iBoxx $ High Yield Corporate Bond ETF (HYG) is down 11%. That compares with an 8% fall for the iShares 3-7 Year Treasury Bond ETF (IEI).

But when you look over the past three months, that trend has reversed. 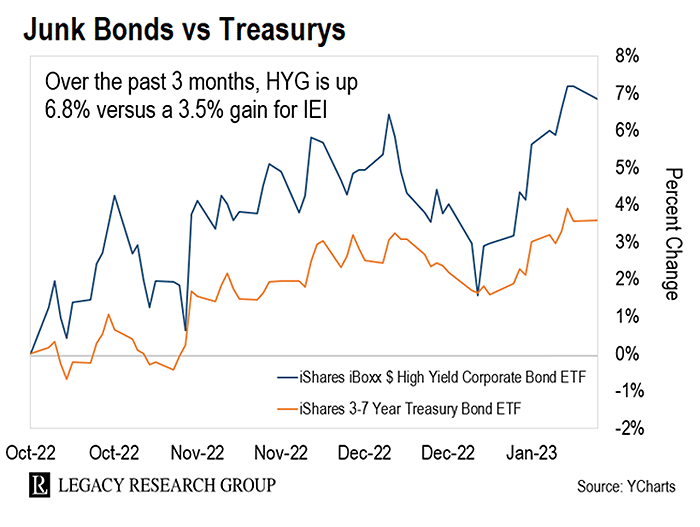 That’s not something you typically see heading into a recession.

Reason for Optimism No. 3 – Stocks have started the year well…

If you had money in the stock market in 2022, your portfolio almost certainly took a hit.

But this year, all three indexes are up. 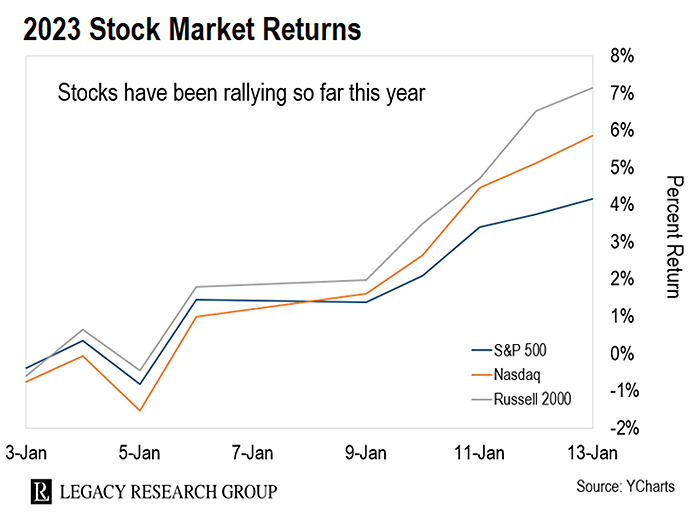 We’re only 17 days into the new year. How can I say this rally is meaningful?

Because that’s the message from history.

The S&P 500 showed a positive gain for the first five trading days of this year.

The last 45 times the first five days have been positive, the full-year return was also positive 82% of the time.

If you’re skeptical of my optimistic message, I get it…

Deep-rooted inflation… an ongoing bear market… and a looming recession. These are all the hot financial narratives in 2023.

But let’s pause here to recall that insight from Bob Farrell. When all the forecasters agree, it’s a sign of groupthink at work.

That’s as true today as it was over the nearly half a century Farrell was calling turning points in stocks.

It’s possible the consensus is right. But as Farrell pointed out, it’s more likely to be wrong.

That means holding on to the stocks you already own. It also means looking for new opportunities to profit.

He’s one of America’s most widely followed income investing experts.

And last year, we teamed up with him to bring his expertise on building fat streams of stock market income to you and your fellow readers.

Brad’s new advisory helps you do just that.

It’s focused on the best dividend-paying stocks in the world. And thanks to the power of income investing, he says it will allow you to make in four months what most investors make in a year.

To watch Brad share this strategy on camera for the first time, go here now.

He’s offering a special discount to folks who get in on the ground floor of this new advisory.