The first time I almost died in a flash flood, we were driving up a dry riverbed under an overcast sky on our way back from Pucarilla.

It’s the little valley in northwestern Argentina where my family grows grapes for our Tacana wine.

Looking up the riverbed, I suddenly saw what looked like a thin, gray snake working its way down the incline toward the truck.

I didn’t think much of it until the passengers next to me shrieked in horror.

I heard it before I got a good look at it – a roaring mess of white water, charging down the riverbed straight at us.

My father, Legacy cofounder Bill Bonner, shifted down and gunned the engine, turning sharply up a rocky bank to our right.

The truck didn’t make it far up the bank. It got stuck on a large boulder… its four wheels spinning helplessly.

We leapt out, but it was too late. The land around us – the driest of deserts just seconds before – was now a reddish-brown torrent dotted with white rooster tails sputtering up in the air.

We were now residents of what was fast becoming the smallest island in the Calchaquí Valley, just barely high enough to avoid the flood.

Two hours later, the waters suddenly disappeared… with nothing but a pickup truck teetering atop a boulder to indicate anything had ever happened.

These Grapes Are Survivors

What makes the soil here in the Calchaquí Valley so dangerous on the one day a year it rains also makes excellent vines. 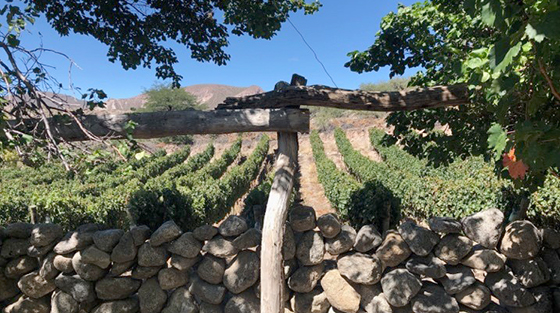 Pucarilla, where we grow our vines

The bone-dry sand provides excellent drainage for the trickle of snowmelt – purified during a 1,000-foot tumble down the Andean slopes. This stops the grapes from shriveling up entirely. 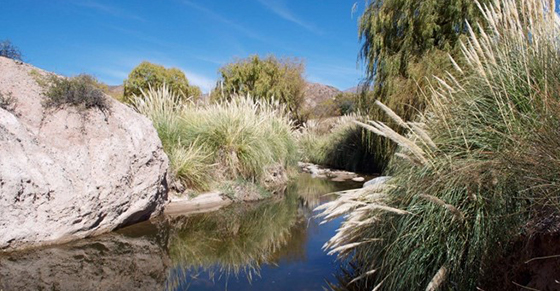 Pure snowmelt running through our valley

If they did, we could scarcely blame them.

During the day, intense UV rays (80% more intense than in Bordeaux) blast them. This creates firm, round tannins (and antioxidants… up to 10 TIMES more than other wines!)…

…while at night, the temperature drops nearly 80 degrees, forcing the grapes to conserve nutrients.

To survive, the grapes develop thick skins – a nearly black, dark red color so intense it turns stainless steel a deep red – and tannins that firmly grip the mouth as hints of plum, blackberry, leather, and smoke drift across the palate…

Were the grapes of a lighter varietal – say, Pinot Noir or Gamay – we’d be in real trouble. But our vines – like most others in these hidden valleys – are of an old Malbec variety that disappeared from Europe about 150 years ago.

It’s a survivor. Out here, you have to be. Fall off your horse, get caught in a flood, or get bitten by a snake… and the nearest ambulance is six hours away (assuming you can call one, which you often can’t because there’s no cell phone reception or landline).

Wine Worth the Trouble

For most folks, growing grapes out here isn’t worth the trouble.

On the rare occasion you find wines from here in America, they can go for over $500 a bottle.

Which is why I recently came up with a way to get wines from hidden valleys like ours… delivered direct to your doorstep… with no middlemen or inflated prices.

Here’s how it happened…

A few years ago, I moved back to the U.S. from Argentina. I liked being back. But one thing I missed was the wine culture…

…where old friends dine late into the night, sharing memories and laughter over a great bottle that costs just a few dollars (yet could be a 98-point wine)…

…where the wines themselves are brimming with life and complexity…

Back home in Florida, I’d go to the supermarket only to find bottle after bottle of dead, flimsy wine.

All the wine’s character and richness have been stripped away by mass-market winemaking tricks that may as well have been developed at Dow Chemical. (They often left me feeling like I ingested something from Dow Chemical, if you know what I mean.)

That gave me an idea: If I could gather together a few friends – enough to fill a shipping container with wine – I could bring high-altitude wines directly from Argentina to folks’ doorsteps.

So I teamed up with some friends (including two internationally renowned sommeliers)… and created the Bonner Private Wine Partnership.

You might call it a “club,” though it’s nothing like any other wine club (you know, the kinds that bombard you with bad bulk wines until you cancel).

Every quarter, we send our members a collection of great – but little-known – wines from a different part of the world.

It’s an experiment, but an exciting one. If we can enjoy these hard-to-get wines, without paying an arm and a leg, then I’ll be happy with it.

And so far, our members agree.

(If you’d like to join us, we have a limited number of spots remaining for the latest shipment of wines from Argentina. It includes a bottle of never-before-imported 90-point wine from the reclusive winemaker behind the Bonner family wine, Tacana. You can read on here to learn more…)

Miracle at the Edge of Civilization

A ways across the raging torrent – a wide, bone-dry riverbed just an hour before – I could see lights waving. Likely Jorge, our faithful ranch foreman, with a flashlight. He had probably seen my headlights sink beneath the water while he waited for our arrival at the ranch house.

I gunned the engine, hoping for the best.

Then… a miracle. I felt my front wheels catch on something – a log or a boulder?

I managed to get just enough traction to propel the truck forward against the current and onto a sandbank. Minutes later, we were on the opposite side of the riverbed. Jorge ran over to us in the dark.

It was the first time I had ever seen his face – typically unperturbable after 70 years living up here at the edge of civilization – change into something remotely comparable to alarm.

We looked at each other silently for a moment.

Minutes later, the water was gone.

P.S. We just got in a shipment of high-altitude Malbecs. It includes a wine from the third-highest vineyard in the world (8,950 ft.) and a never-before-imported masterpiece from the winemaker behind my fathers’s Tacana wine (wine critic Robert Parker rated this new wine 90 points). Care to sample these rare vintages? As a Daily Cut reader, you can view the Bonner Wine inventory at this special link…