Bitcoin (BTC) is on a tear…

If you followed our crypto expert, Teeka Tiwari’s, recommendation to buy bitcoin in April 2016, you’re up 14,146%.

But some folks are worried the feds will end the party by banning or overregulating crypto. Teeka will ease those fears in a moment…

Bur first, if you’re new to The Daily Cut, welcome aboard.

Our mission is to plug you into the best research, ideas, and recommendations from Teeka, Jeff Brown, Dave Forest, Jason Bodner, and the rest of the Legacy team.

On Fridays, we feature questions your fellow readers send in… and responses from the team.

So if you have a burning question for one of our experts… send it to [email protected].

I (Chris Lowe) will do my best to get you a reply.

Now, let’s turn back to those questions from Teeka readers about what the future holds for bitcoin…

Reader question: I am getting emails talking about Biden banning bitcoin. Please comment on this potential threat.

Reader question: What do you think will happen when they start to regulate crypto? Do you think it is possible that regulation will cause prices to drop?

Reader question: I know Teeka keeps saying to ignore the FUD [fear, uncertainty, and doubt]. But I’m seeing so much fear of regulation out there. The remarks by the chairman of SEC [the Securities and Exchange Commission, the main U.S. stock market regulator] and Biden’s anti-crypto appointee don’t seem encouraging.

Teeka’s response: We’ve seen a lot of negative news about bitcoin over the past six months…

But bitcoin continues to rally in the face of this negativity.

That’s why I say bitcoin has reached escape velocity. It’s a world-class asset now. And no amount of jawboning by government officials or Wall Street elitists will change that.

My key takeaway: Don’t worry about the negative news.

The SEC won’t ban crypto. Will it regulate it? Sure. I expect to see some regulation of this asset class… But much of that will be a good thing because it will allow more regulated money to come into the crypto market, making it boom even more.

The crypto genie is out of the bottle, and there’s no putting it back.

At its current pace of adoption, crypto use will soon rival that of the internet. And as cryptos are integrated into the global financial system, we’ll see big banks defend them from government overreach.

All you have to do is look at the massive rate of adoption and bet on Wall Street’s greed and pervasive political influence. Think about it. In 2008, the “banksters” crashed the global economy, bankrupted a third of America, and made billions in the process… and no one went to jail.

With the amount of money at stake for the big banks, you can see why the U.S. government will never ban bitcoin. There are too many powerful people getting obscenely rich from it.

If you own bitcoin, enjoy the ride higher. And if you don’t… consider adding some exposure to your portfolio today. I believe it still has at least 10x upside from here.

For more on why Teeka sees bitcoin rising 10x from today’s prices… read on here.

Switching gears, we turn to our tech expert, Jeff Brown.

With Jeff’s help, your fellow readers have been profiting from the biggest technological advances of our lifetimes – including 5G, self-driving cars, artificial intelligence (AI), gene editing, and blockchain.

But one Jeff reader worries the global supply-chain traffic jam caused by the COVID-19 pandemic could spell disaster for these and other technologies.

Don’t worry, says Jeff. What looks like disaster could be a new dawn for American manufacturing…

Reader question: Does Jeff have any thoughts on the supply-chain issues? Some are saying it’s going to be really bad, but I trust Jeff to report the real scene and its financial ramifications.

Jeff’s response: Hi, Greg. Thank you for sharing this question. This is a topic that has been on my mind lately.

Journalists and the financial press have poorly covered it. They tend to focus on only one aspect of what’s happening, rather than the big picture.

There’s plenty of manufacturing capacity to meet current demand. In most cases, the products have already been made. The problem has been that these products are stuck either on a ship waiting to unload or on cargo containers sitting at a dock.

For instance, about 500,000 containers are sitting off the coast of Southern California doing nothing. The ships are waiting to dock at ports in Los Angeles or Long Beach. On top of that, there are 250,000 containers sitting at the docks waiting to be picked up. 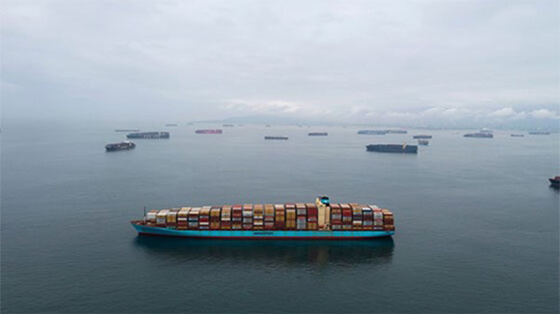 I saw the same thing as I flew over San Francisco and Savannah, Georgia, which is a major port on the East Coast. It’s crazy.

The issue is that many dockworkers have refused to return to work. A similar situation, but not as bad, has also happened with truck drivers.

The most frustrating thing about this traffic jam is it was completely avoidable. The government paid people not to work. It’s incentivized workers to stay unemployed. This is a direct consequence of these terrible policies.

To put things in perspective, there are almost 11 million jobs available and 9 million people who are unemployed. Many simply don’t want to come back to work. We have a surplus of jobs due to the strength of the re-pandemic economy. It was so strong, it just shrugged off the pandemic and kept moving.

If a container of products hasn’t yet shipped, there’s no way these items will be in stores before Christmas. It’ll take months to clear out the backlog. And that assumes people come back to work on the docks.

The one area there’s genuinely a manufacturing bottleneck is the semiconductor industry. On average, it’s seeing almost a 22-week order lead time.

Imagine having to wait more than five months to get the semiconductors you need to manufacture your product. Insane. I’ve never seen it this bad in the semiconductor industry – and I worked in it for two decades.

This is entirely demand-driven. The pandemic contributed to this problem. With the ridiculous and irrational lockdowns and the dramatic increase in remote work, consumers have been buying more electronic devices.

Coupled with a technological upgrade in wireless networks (4G to 5G) and Wi-Fi networks (from Wi-Fi 5 to Wi-Fi 6), this a perfect storm for the semiconductor industry.

As I wrote in my daily tech investing e-letter, The Bleeding Edge, if Apple is having trouble getting its semiconductors, we know it must be even worse for everyone else.

We’re in for a tough holiday season. So my advice is get your holiday shopping done right away.

I expect the problems at the ports in the U.S. will last another couple of quarters and extended semiconductor lead times will still be with us into the second half of next year.

But there’s a silver lining here. Due to these global supply-chain issues, many U.S. companies will return to onshore manufacturing. They’ve learned a tough lesson over the last year and a half. If they want to be more in control of their economic futures, they need more resilient domestic manufacturing bases.

The gap between wages in the U.S. and wages in China and other developing nations just isn’t that large anymore. And with technologies such as 3D printing, computer vision, robotics, AI, and automated manufacturing, U.S. companies can now affordably make products at home.