The bounce in stocks has been lightning fast…

The U.S. stock market bellwether has now zoomed 43% higher from the bear market low it set on March 23.

And even after its 34% plunge in February and March, it’s down just 1% for the year.

But as impressive as that V-shaped recovery is… it’s nothing compared to the bounce in IPO stocks.

The Renaissance IPO ETF (IPO) tracks a basket of the 50 most recent initial public offerings. And it’s blown out of the water even the monster gains for the S&P 500. 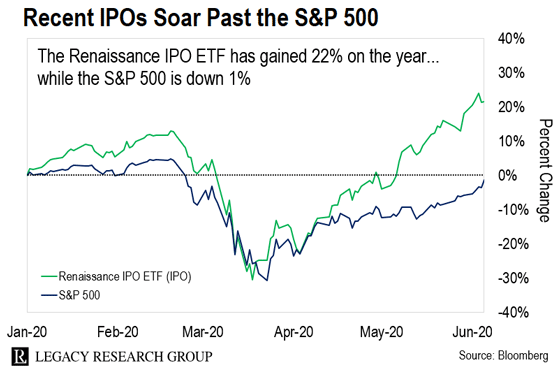 And as you’ll see today, that massive outperformance is set to continue.

Every week, thousands of new readers sign up to one of the 17 paid advisories we publish at Legacy Research.

The Daily Cut is the premium e-letter we created as a bonus for all these paid-up Legacy subscribers.

And pre-IPO deals are one of the top opportunities we’re urging you put on your radar right now.

That’s because they allow you to get into stocks ahead of the investing crowd. Let me explain…

Their shares don’t trade back and forth between members of the public on an exchange such as the New York Stock Exchange.

In the early days, all shares a company issues to raise cash are in private hands.

If you’re a venture capitalist (VC)… or a wealthy industry insider… you might get your hands on them – if you’re lucky and your pockets are deep enough.

But if you’re a regular investor, forget about it. You can’t simply log on to your online broker and buy private shares.

That means most folks get an opportunity to profit only after shares go up in price substantially and list on an exchange.

Getting in ahead of the crowd can be wildly profitable…

You see, when a company is just starting out, it’s willing to sell shares for a tiny fraction of the price they may later fetch on an exchange.

Sometimes, these private shares are available for just pennies on the dollar.

And it’s a mathematical certainty that the less you pay to own shares, the higher your profits will be when they soar.

That’s how colleague Teeka Tiwari made so much money for his readers in crypto.

For instance, in April 2016, he recommended a fledgling crypto called ether (ETH) to his Palm Beach Confidential subscribers.

At the time, one ether coin traded for $9.

Today, ether is the second-largest crypto asset by market value. It trades for $242.

That’s a 2,588% gain for readers who followed Teeka’s recommendation.

And in February 2017, he recommended a new Chinese competitor to ether called NEO (NEO).

These massive moneymaking opportunities are now in the rearview mirror. But similar gains are on offer in the pre-IPO market… if you know where to look. Teeka…

Most folks buy shares after they IPO. But the truly life-changing returns come from investing before these companies go public.

As Teeka said, those are life-changing gains. If you’re making 64,200% returns, it takes a grubstake of just over $1,500 to make your first million.

Your downside is limited.

But your upside potential – as early Uber investors know well – is astronomical.

Said another way, pre-IPO shares make for great asymmetric bets. They’re potentially high-reward bets that can really move the needle on your wealth. And you have to invest only a small amount for a chance to make life-changing gains.

In our book, those are the only kind of speculations worth making.

Most of them won’t be winners. But when you hit the jackpot on one of them, your gains will far outweigh the hits you’ve taken on the speculations that didn’t go your way.

The IPO market has been on the rocks lately…

That’s thanks in part to the high-profile flameout of IPO candidate WeWork last October.

As you may recall, the company was a “unicorn” – a private company valued at $1 billion or more.

It was also a terrible business.

WeWork provides shared workspaces companies and individuals can rent out. The Wall Street hype machine went into overdrive promoting it as the office of the future.

But increased scrutiny of WeWork’s business model showed it was on shaky ground. The company was hemorrhaging cash opening up new locations that it wasn’t filling. And eventually it had to cancel its much-hyped IPO.

WeWork’s debacle led to a temporary cooldown in sentiment toward new IPOs.

Then the pandemic caused a number of IPO candidates to press pause on their plans.

But just last week, the IPO market heated up again…

Last Thursday, software firm ZoomInfo went public at a share price of $21. A few hours later, its shares had soared 90%.

On Wednesday, Warner Music Group went public. It’s the entertainment group behind Ed Sheeran, Bruno Mars, and Cardi B. It went public at $25 per share. And its shares rocketed 20% on the first day of trading.

And late last month, online insurance broker SelectQuote went public at $20 a share. Last week, it traded as high as $29. That’s a 45% gain from the IPO price.

But here’s the thing… Those post-IPO gains are nothing compared to the ones pre-IPO investors reaped. Teeka again…

Wall Street has duped Main Street out of millions by using this trick – without you even realizing it.

Take ZoomInfo. Early private investors included Great Hill Partners. It invested in ZoomInfo in 2017, when it was worth only $240 million.

After its successful IPO, ZoomInfo is now valued at $8 billion. That’s an increase of about 3,230% in three years.

Since going public last week, WMG has a $15 billion valuation… marking a return of 355%.

As Teeka says, these investors throw some crumbs mainstream investors’ way. But most of the gains go to the insiders.

What’s going on is far from fair…

One of the reasons Teeka has so many loyal fans is he exposes the dirty secrets of Wall Street and Silicon Valley.

And he’s made it his mission to use the secrets of the ultra-wealthy to help as many of his readers as possible become millionaires by leveling the playing field in their favor.

But don’t for a second believe you start off on a level playing field.

Most of the time, it’s one set of rules for the already wealthy… and a completely different set for regular folks.

But that’s all changing…

The Securities and Exchange Commission (SEC) is the main stock market regulator in the U.S.

You can do that through Regulation A+ deals. They’re open to the general public – not just accredited investors.

You can start searching for private deals on crowdfunding platforms such as SeedInvest and MicroVentures.

They list startup companies raising money from the general public.

Teeka also uses his network of insiders, VCs, and CEOs to give our Palm Beach Venture subscribers access to best-in-breed deals.

If you’re not a subscriber, and you’re interested in learning from Teeka about the best private deals, go here to learn more.

Just remember to keep your speculations to a manageable portion of your portfolio. The potential gains are asymmetric. So you need only small grubstakes to be in with the chance to make 10x, 50x, or even 100x your money.