Trade war news is blocking out the sun…

It kicked into a higher gear on Friday. That’s when China announced new tariffs on $75 billion of U.S. imports.

And it ratcheted up again after a tweetstorm from President Trump in response to the tariff news.

Trump lashed out at Chinese leader Xi Jinping. He also said American firms were “hereby ordered” to leave China and return home. As he tweeted…

Our great American companies are hereby ordered to immediately start looking for an alternative to China, including bringing […] your companies HOME and making your products in the USA.

To say this roiled the markets is an understatement… 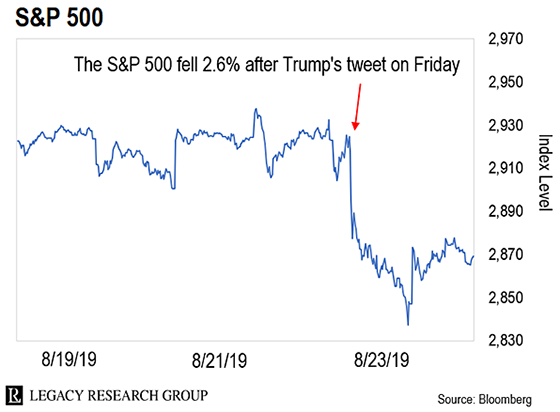 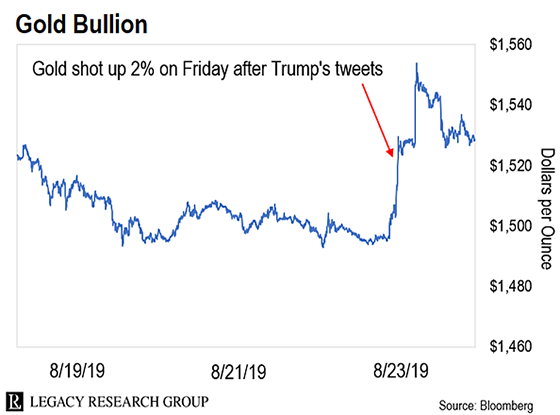 We’ll be returning to what these wild moves mean for your wealth later this week.

Today, more on the U.S.-China story the mainstream press is missing… and why it’s behind one of the most profitable investment trends of the next decade.

The U.S. and China are at war over more than trade…

But unlike the Cold War between the U.S. and the Soviet Union, it isn’t about getting the most nukes.

As we’ve been showing you, it’s over a suite of bleeding-edge technologies.

Artificial intelligence (AI), robotics, and self-driving cars and trucks… These are technologies that will soon be commonplace in our daily lives.

And Washington and Beijing know these technologies will also bring critical economic and national-security advantages to whoever becomes the leader in them first.

Remember, trade wars are lose-lose. You can’t get a sustained advantage over your rival. For every tariff you slap on its imports… your exporters suffer a tit-for-tat response.

Tech is different. It promises a real economic and competitive edge… even a lasting military advantage… through higher productivity.

And the most critical tech for both sides is the new wireless network that connects all these innovations together – 5G.

It will allow you to download a movie in two seconds on your smartphone.

5G will also allow you to surf the internet and make phone calls while riding on a high-speed train up to 310 mph. And that’s great news for smartphone users.

But 5G will also enable a suite of new technologies – from fleets of self-driving cars… to robotic surgeries performed by human surgeons from thousands of miles away… to even “beaming” into work with hologram technology.

These technologies need the blazing-fast speeds… and the almost nonexistent delay… of 5G networks.

By 2025, an estimated 75 billion devices will be connected to the internet.

That includes cars and trucks driven by AI pilots.

And these AIs need to send and receive vast amounts of digital data over wireless networks. Here’s how our go-tech tech expert here at Legacy Research, Jeff Brown, explained it…

5G isn’t just faster than 4G. It was built from the ground up to be able to assign “slices” of the wireless spectrum to specific applications. This will allow wireless network operators such as Verizon, AT&T, and T-Mobile to guarantee a network connection to a self-driving car or truck company.

Each self-driving truck needs to be connected, in real time, with a high-speed connection. And if a human driver at a remote command center location needs to step in and drive the truck through a tricky navigation, there can’t be any delay – or “latency” – in the connection.

5G is the only network technology that can provide dedicated bandwidth, low latency, high-speed connections, and guaranteed quality of service. A self-driving world is impossible with current 4G networks.

According to a report in the South China Morning Post, a surgeon in the southeastern Chinese province of Fujian used a 5G network connection to control robotic arms 30 miles away.

Latency, or delay, occurs when you send data across a network – whether it’s via cable or via wireless networks. Over 5G networks, latency will drop by 99%… from more than 100 milliseconds down to a mere millisecond.

A latency reduction like this will enable doctors to operate on a patient via robotic surgery… over a wireless network… miles away. This will revolutionize health care options, especially in remote regions.

They can learn for themselves. They’re even superior to humans at certain specific tasks.

AIs can now beat the best human players in strategy games such as chess, Shogi (Japanese chess), and Go (from China). AIs are now also better and faster than human clinicians at detecting cancers.

And like with robots, AIs will reach their full potential only when they’re connected to 5G networks. Jeff again…

We will do some AI processing at the edge of our networks – for example, in our cars or on our smartphones. But for the heavier AI tasks, we’ll connect from our cars or our devices back to powerful data centers running AIs.

Again, the high speeds and low latency of 5G will be key. An obvious example is the AI pilot of a self-driving car. There will be times when the car needs to determine how to react to a situation at the edge of the network (on a road) that requires a decision from a remote AI in a data center miles away in just a few milliseconds. This is only possible with 5G.

He held a free investing summit about this last Thursday, called “The Final Phase of the 5G Boom.”

Thousands of your fellow readers tuned in to hear from Jeff. And as a thank-you, he shared details about his top watchlist company.

If you missed the event, don’t worry. You can still watch the replay… and learn Jeff’s No. 1 5G watchlist company… right here.