That’s what you call a megatrend…

Jeff Brown readers will know what I’m talking about.

Since he joined the team here at Legacy Research in 2015, he’s been shouting from the rooftops about it.

In short, Jeff believes tech is the single biggest source of profit opportunities the stock market has to offer.

This chart of the Nasdaq-100 Index says it all. This tech-heavy index is dominated by big tech names such as Apple, Amazon, Google, and Facebook. 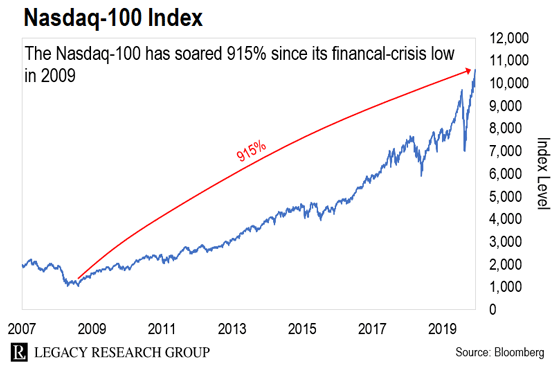 Four of them – Apple, Microsoft, Amazon, and Google– have market values of more than $1 trillion. But unlike most stodgy blue-chip stocks, these tech blue-chips have explosive growth potential.

To become a millionaire, all you had to do was grasp that tech was an unstoppable megatrend… plunk down $100,000… then sit still and do nothing for a decade.

Now this kind of opportunity is in sight again. As you’ll see in today’s dispatch, the next decade is setting up for another round of outsized gains like these.

First, if you’re joining us for the first time, welcome aboard…

The Daily Cut is the premium e-letter we created two years ago for all paid-up Legacy Research readers.

Our goal is simple – make sure you never miss a big idea from Jeff, Teeka Tiwari, Bill Bonner, Doug Casey, Dave Forest, Jason Bodner, Dan Denning, and the rest of the Legacy team.

One of the biggest ideas we write about these days here at Legacy is the rise of technology. That’s why we spill so much digital ink on 5G wireless networks… artificial intelligence… self-driving cars and trucks… and CRISPR gene editing.

And in 2020… despite the historic turbulence in global stock markets due to the coronavirus pandemic… tech continues to soar.

Take Jeff’s recommendation of Amazon.com (AMZN) in our flagship tech-investing advisory, The Near Future Report.

Amazon has shot up 69% since Jeff recommended it last November…

If you don’t know him already, Jeff’s been a member of Silicon Valley’s “in” crowd for more than two decades.

He was an executive at some of the world’s most successful tech companies – including Qualcomm, Juniper Networks, and NXP Semiconductors. And he’s a formal advisor to eight early stage tech startups.

His mission at The Near Future Report is to help his readers profit from stable, sleep-well-at-night companies in solid growth mode.

That’s why he added Amazon to the model portfolio in October 2019.

The company has a market value of $1.5 trillion. That makes it the third-largest company in the world after fellow tech standouts Apple and Microsoft.

Here’s Jeff with more on that…

Amazon is already so massive you’d think its share price couldn’t gain that much in percentage terms over such a short time. But that’s the kind of growth on offer when you invest in the right blue-chip tech stocks.

And your downside risk as a shareholder in Amazon is limited. Amazon is deeply embedded in the lives of more than 150 million customers around the planet. It sells 353 million products… pulling in roughly $280 billion in sales annually. It’s not going away anytime soon.

Amazon isn’t even the biggest win for Near Future Report readers.

Its mission is to get rid of costly paperwork by allowing people to sign contracts digitally.

And it’s been a steamroller since Jeff recommended it in June 2019.

As you can see from the chart below, DocuSign is up 273% since then. 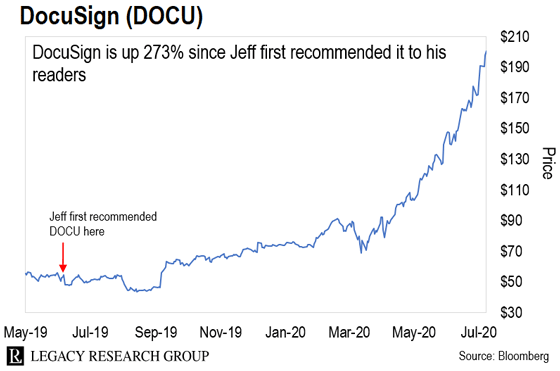 Another of Jeff’s top tech recommendations, specialist chipmaker Nvidia (NVDA), is up 183% since he added it to the model portfolio in January 2019. 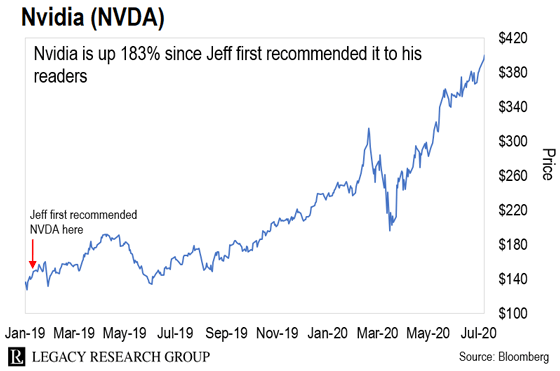 You may think I’m cherry-picking here. But 18 of Jeff’s 22 open tech blue-chip recommendations are winners. And the average gain is 59% across the entire model portfolio.

Just look at this next chart… 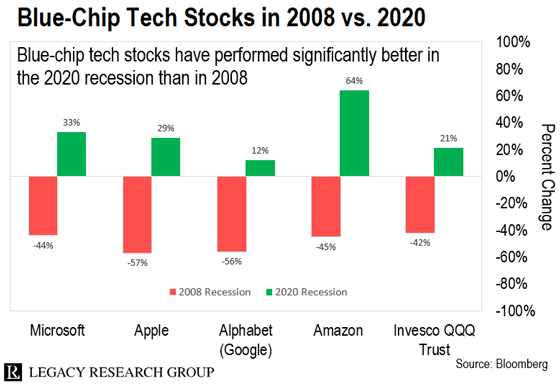 This is why Jeff now has almost 100% of his personal wealth in tech stocks.

It’s one of the few stock market sectors where you get to own safe, conservative investments… with explosive growth potential.

Jeff’s putting his money where his mouth is…

He’s been selling off his real estate investments and putting the funds into tech stocks.

He’d rather have his wealth in the kind of blue-chip tech stocks he recommends to his Near Future Report readers. Jeff…

A good yield on a real estate investment is 7%. A really good yield is 12%. That’s in a good year… when you’ve got full occupancy… and you don’t have a costly repair bill. But you have bad years, too. You get a lot of unexpected expenses. They eat into your rental yield. Or a tenant walks out and leaves you in the lurch.

As a real estate investor, you’ve got some upside in terms of capital gains. If you got into a good area… at the right price… the value of your property will likely increase over time. But outside of a real estate bubble like we saw in the 2000s, those types of gains are insignificant compared to investing in an Amazon… or a DocuSign… or a Nvidia.

Also, when you buy a stock, there’s no “friction” – or transaction costs. Jeff again…

Almost all brokers now offer no-fee stock trades. So there are minimal costs when you buy and sell your stocks. You also don’t have to worry about property management fees. And you’ll never have to fix a clapped-out refrigerator… a leaky roof… or a busted pipe.

And remember, the best tech stocks, like the ones I target, aren’t in firms doing business as usual. They’re not simply improving on a product or service that’s been around for decades.

They’re paradigm-shifters. They’re literally powering the future. You won’t find that potential anywhere outside of tech. That’s where I want to stake my claim.

You can stake your claim, too…

One way to do that is through shares in a Nasdaq-100 exchange-traded fund (ETF).

There are a lot of them out there. But the oldest and most widely traded is the Invesco QQQ Trust (QQQ).

It will give you broad exposure to the rise of tech megatrends. If Jeff is right, it has another decade of outsized gains ahead.

I also encourage you to check out the new briefing Jeff put together about something he calls “6G.”

It’s a combination of bleeding-edge tech that takes regular 5G – and turbocharges it.

And as Jeff reveals here, the biggest companies in America are paying a king’s ransom for access.