Today’s prediction may sound a little “off” to some readers…

Given how much investor wealth has gone up in smoke in 2022, it may even strike you as tone deaf.

But I hope you’ll keep an open mind…

You see, it’s an urgent message Wall Street legend Marc Chaikin has been spreading this past week to more than 8 million Americans online and across 30 TV channels.

It’s about a financial “reset” he sees coming as soon as January.

And it means you could make 100% gains or more on certain stocks next year… even as others fail to recover.

Marc started his career on Wall Street when LBJ was president…

In 1966, he took a job on Wall Street as a stockbroker at Shearson, Hammill & Co.

And he later headed up the options department at investment bank Tucker Anthony.

That’s where his famous Chaikin Money Flow indicator came from.

It’s now on every Bloomberg terminal in the world. And hundreds of banks, hedge funds, and brokerages use it to determine if a stock is bullish or bearish.

It’s also the basis of a system Marc developed at his home in Connecticut that’s helped a lot of folks make a lot of money.

And last year, our corporate affiliate partnered with his firm, Chaikin Analytics, to help everyday investors access these hedge-fund-level insights.

When you see how powerful Marc’s system is, you’ll get why…

I don’t pretend to understand the details of how he uses it to give roughly 5,000 stocks and exchange-traded funds (“ETFs”) “bullish,” “bearish,” or “neutral” ratings.

But the idea behind it is simple… It picks up on millions of dollars flowing into certain stocks ahead of 99% of investors finding out.

In short, if you knew a multimillion-dollar hedge fund in New York was about to turn bullish on a little stock, you’d want to get your money there first. And nothing can make you richer than getting a piece of an unknown stock ahead of a huge flow of cash.

This has alerted Marc to massive moves in individual stocks.

On March 4, it lit up bullish on Target Hospitality (TH). It provides temporary housing for oil, gas, and mining operations.

Look what happened next… 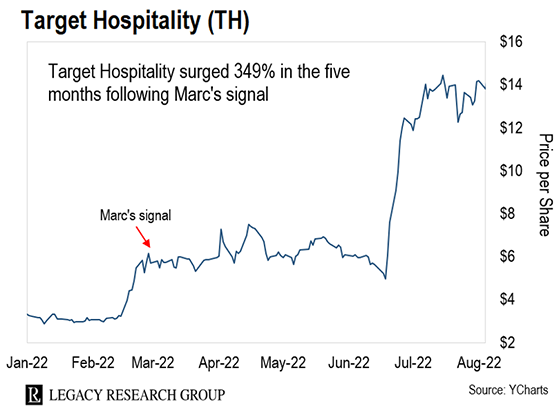 Over the next five months, this stock surged 349%.

You could have quadrupled your money over that span, as the rest of the market was tanking.

And in March 2020, his system lit up bullish on crypto mining firm Riot Blockchain (RIOT).

More impressive, Marc’s indicator turned bearish on this stock before it plummeted 93%.

As I’ve been writing to you about recently, the best time to invest is when nobody else wants to.

That may sound counterintuitive. But it’s basic math…

Bear markets take stock prices lower. And the lower the price you pay for a stock, the higher your profits will be when you go to sell.

The problem is most investors are too psychologically bruised to think straight in bear markets. Instead of scooping up bargains… they tend to hide in cash instead.

And that’s a pity…

Marc shared more examples of stock surges at the end of past bear markets. And they’re impressive.

The first two came at the end of the dot-com crash.

And something similar happened after the 2008 crash bottomed.

Following Marc’s strategy would have handed you in a 782% gain in online furniture retailer Wayfair (W).

We talk about the “stock market.” But there’s really no such thing.

We can lump them together. And we look at what they’re doing, on average, as a group. But Marc says you shouldn’t wait around for the “stock market” to bottom.

The important thing is to identify which stocks will see the biggest moves… and get in before the market-wide shift is complete.

By the time you hear the stock market has bottomed on CNBC, you’ll have missed out on these explosive gains.

I know many readers think they’re doing the right thing by hiding out in cash until the coast is clear.

But that’s a mistake.

It’s good to have parts of your portfolio in more defensive assets such as cash, bonds, and gold. Longtime readers know we’re huge advocates of always following a prudent asset allocation plan.

But if you want to go on the offensive with another part of your portfolio, there’s no better time than when stocks are beaten down and unloved.

That’s why I hope you’ll hear what Marc has to say. In the recent broadcast he recorded, you’ll learn more about his big call for 2023.

He also reveals how to zero in on the specific stocks primed to surge in the new year.

And as a thank you for tuning in, he’ll share his No. 1 stock to buy right now… and one popular stock you must avoid.

I think you’ll find Marc’s insights worthwhile… even if his message feels farfetched in the teeth of the 2022 bear market.

It won’t be online for much longer. So make sure to check it out before his publisher takes down. Watch it for free here.

P.S. It’s worth pointing out that before Russia’s invasion of Ukraine in February accelerated the market chaos we’re seeing today… Marc’s system identified the biggest winners we’ve seen this year.

Here’s a look at those gains…

He dives deep into it in his interview. For all the details, go here now.