“I wanted to die until the pain relief from cannabis…”

That was Carola Pérez, a medical cannabis patient speaking from the stage in Madrid, Spain, yesterday.

I (Chris) came here for Cannabis Europa. It’s one of the world’s top medical cannabis conferences.

And more than 300 industry insiders… from more than 26 countries… were there along with me.

I met with folks from some of the world’s best-known publicly traded cannabis companies, including Tilray (TLRY) and Aurora Cannabis (ACB).

And as I’ll show you today, I came away more convinced than ever that now is the time to put some money to work in beaten-down cannabis stocks.

It shows how transformative medical cannabis can be for certain conditions. It also busts the stereotype we tackled yesterday that cannabis is just for “stoners.”

I hope it will even soften your stance, if you’re an opponent of legalization. (Write me with your thoughts on this at [email protected].)

You see, Carola fractured her tailbone when she was 10 years old.

There were sharp intakes of breath around the room at the conference when she described the nerve pain it causes her nearly constantly.

For most of her life, she’s spent about 15 hours a day lying flat on her back in agony on the floor. Even the tiniest move sends stabbing jolts of pain through her body.

Carola’s doctors gave her all the fentanyl she could take…

But it doesn’t relieve the nerve pain Carola suffers from the way cannabis does.

Cannabis weakens pain signals in the spinal cord and their processing in the brain. And it’s the only effective treatment Carola has found for her pain.

But in Spain, cannabis is illegal for medical purposes. So there’s no way for Carola to get her medicine without risking jail time.

As she told the audience in Madrid, accessing medical-grade cannabis could be the difference between life and death…

When you are in pain… when you are suffering… you can’t wait for the politicians to decide to give you the medication that you need. There is no medical cannabis in Spain. And I can go to jail in Spain for growing it at home in the quantity I need.

But for me, it’s a treatment. And if I don’t have my treatment, maybe I will die in one year or two years because my mind can’t deal with so much pain.

Cannabis has helped Carola, and millions like her, escape chronic pain…

And that’s no surprise.

As I’ve been showing you, we produce endocannabinoids in our bodies. At a molecular level, they are similar to the compounds known as cannabinoids in the cannabis plant.

That means the cannabinoids in the cannabis plant can switch on and off receptors in our body.

Numerous scientific studies have shown that our endocannabinoid system is closely related to pain control and inflammation.

So the cannabinoids in the cannabis plant bind with receptors in our endocannabinoid system to “switch off” pain.

It’s an open secret that professional football, basketball, and baseball players use cannabis to cope with the pain that comes with being a high-performance athlete.

Here’s Reuben Droughns, a running back for the Super Bowl XLII-champion New York Giants team, in a June 2019 interview…

I would estimate that from what I experienced, anywhere from 80 to 90 percent of football players use some type of cannabis medicine. The alternative is to use opioids, which most players want to avoid, if possible, for day-to-day chronic pain.

The day-to-day pain management issues that players deal with can be dealt with through cannabis. Something that is all natural and nowhere near as harmful as the stuff that they’re using now.

The alternative is highly addictive opioids…

That’s insane when you think about the devastation opioids can cause.

U.S. Department of Health and Human Services (HHS) figures show that 130 people die from opioid overdoses every day. And the HHS estimates that one in three of these deaths involves a prescription opioid such as fentanyl.

That’s why, last December, Major League Baseball (the MLB) removed cannabis from its list of “drugs of abuse.”

Those alternative therapies include cannabis and cannabinoids.

The legal-cannabis megatrend isn’t going away…

The U.S. Food and Drug Administration (FDA) has approved Epidiolex, a cannabis-based drug that treats severe forms of epilepsy.

And in Britain, British-made cannabis-based drug Sativex is approved to treat nerve pain.

Cannabis is far too promising a medicine to send back underground. It’s safer than opioids. And already, doctors in the U.S. have prescribed Epidiolex to 12,000 people… and Dronabinol to 43,000 people.

Meanwhile, researchers believe cannabis has the potential to treat everything from Alzheimer’s… to arthritis… to Crohn’s disease (an inflammatory bowel disease)… to Parkinson’s… to multiple sclerosis… to post-traumatic stress disorder.

In other words… cannabis is responsible for some of the most exciting medical breakthroughs in the world right now.

Investors have taken cannabis stocks to the woodshed. 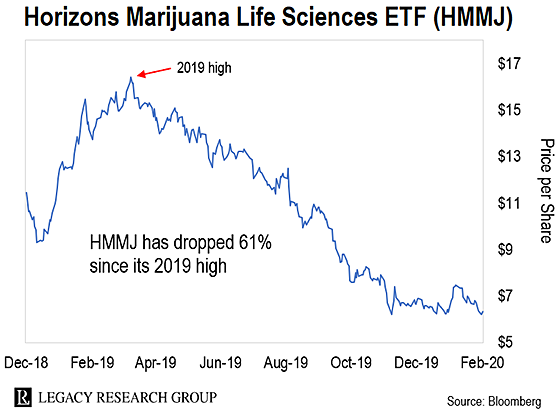 This chart is of the Horizons Marijuana Life Sciences ETF. It tracks 64 different cannabis stocks. And as you can see, it has dropped 61% since its 2019 high.

That’s gotten a lot of folks running scared. And it’s only natural. These kinds of losses are on par with the losses investors suffered in the dot-com bust.

But according to colleague Teeka Tiwari, now is actually a great time to be a buyer, not a seller, of cannabis stocks.

As regular readers know, Teeka is bullish on medical cannabis.

In early-stage megatrends like legal cannabis, the market is full of cycles of fear and fantasy. Each new flight of fantasy takes prices to new highs… and each bout of fear ends in higher lows.

Last year, the overall cannabis market got hit hard with a boatload of negative headlines. Mainstream investors panicked and sold their positions… which crushed prices.

That’s the fear part of the cycle. But as usual, the mainstream ignored what was going on under the hood. And that’s what makes this moment in time so potentially lucrative. Teeka again…

Just like when investor sentiment gets out of whack with reality on the upside, the same can happen on the downside. And that’s exactly what’s happening now.

When sentiment finally catches up to the reality of what’s happening in the industry, we’ll see a new fantasy cycle that’ll take this sector to new highs. Companies trading near their bottoms could soar five, 10, or even 100 times or more when investor sentiment flips.

It’s important, as always, that you speculate wisely…

One way to get exposure to the upside in cannabis stocks is to buy shares in HMMJ.

It will give you broad exposure to the cannabis industry.

But keep your position size small. As Teeka has been showing his readers, the beauty of investing in a young industry like this is you don’t have to risk much to make outsized profits.