If you’re counting on the midterms to fix your problems, you’re going to be disappointed…

Here at the Cut, we do our best to ignore the partisan food fight in Washington.

But it’s darn hard to ignore when elections roll around.

Politicians love to be center stage. And they have some influence over markets.

So we grudgingly tune in…

But it’s a huge mistake to think politicians can solve your financial issues.

Sure, they have some influence over what investors do. But markets drive politics, not the other way around.

She took office on September 6. Her first act as prime minister – a blow-out stimulus package – triggered a rout in British government bonds.

And it forced her to resign, on October 21, after just 50 days on the job.

So today, we’ll look at why the big news this week is the latest inflation figures… not what happens in the midterms.

First, to get our bearings, let’s take a quick look at what we know at this point about the midterm results.

House Minority Leader Kevin McCarthy has declared victory for the GOP in the House… but by a much narrower margin than expected.

And control of the Senate hangs in the balance.

As I type, the each party holds 48 seats. Democrats must win two of these tight races to keep their majority. So results in Alaska, Arizona, Georgia, and Nevada will decide the outcome.

The Georgia race between Raphael Warnock and Herschel Walker was too close to call.

As neither candidate got more than 50% of the vote, they’ll duke it out again in a runoff election on December 6.

So we may not know who’ll keep the Senate until next month.

Even if we did know, what would we do with that information?

You might think who’s in power in Washington makes a difference to markets.

And there are some studies that show differences in long-term returns depending on the balance of power there.

But if that was the case, why were average annual stock market returns during the Trump and Obama administrations nearly identical at 16.0% and 16.3%, respectively?

The average annual return over the past 30 years is 10.6%. So stocks did great under these two radically different Commanders-in-Chief.

Folks who allowed their political opinions to get in the way may have missed out on outsized returns during political administrations they didn’t like.

It’s a much bigger threat to your portfolio right now than the party you don’t like winning an election.

And tomorrow, we’ll get crucial news on where inflation is at.

The Bureau of Labor Statistics will release October data for the Consumer Price Index (CPI).

The CPI was up 8.2% on an annual basis in September. So your dollar savings have lost 8.2% of their buying power over the past 12 months.

At that rate, you’ll lose about a third of your buying power in five years. 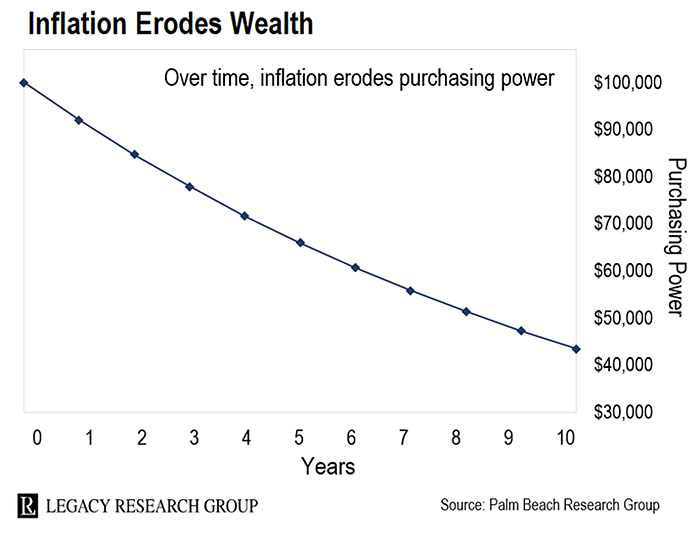 And you’ll have to earn at least 8.2% a year on your investments just to stop your buying power from shrinking.

And analysts expect it to clock in at 7.9% in October.

He’s been begging his readers to take action to stop inflation from eating into their wealth… like it did in the 1970s. Teeka….

During the Great Inflation of the 1970s, stocks rose just 5%. But after accounting for the wealth-killing effects of inflation, investors were down 49% over the decade.

On the surface, it looked like their stock portfolios had grown. But they were silently growing poorer…

And Teeka says we’re living through a similar time today…

From 2002 to 2022, the average annual return of the S&P 500 was 7.9%. Right now, inflation is running at 8.2%. Inflation is outpacing the 20-year average return of stocks. And this is a problem no matter which political party you support.

I don’t like to get political in my newsletters. But I think we can agree both parties spend like there’s no tomorrow. So, I don’t expect either party to be prudent caretakers of the nation’s finances. That means more inflation… higher rates… and more troubles for stocks.

So, if you’re relying on the S&P 500 to bail you out… you’re dooming yourself to a retirement far below the standard of living you enjoy today.

What can you do instead?

A maverick is an unorthodox, independent-minded person. Like Tom Cruise’s character from the Top Gun movies.

Lieutenant Pete “Maverick” Mitchell goes his own way. He’s free-thinking. And because of that, he’s successful.

And Teeka says that’s the mindset you need to survive this inflationary market.

But here’s the thing… You won’t find maverick ideas on Wall Street.

Maverick investments are outside of the traditional financial system. And they have three traits that make them great for outpacing inflation…

Inflation happens when governments and central banks create too much money.

Art and collectibles, by contrast, are scarce. You can’t fake them or artificially inflate their supply. And people who own them know they’ll always have willing buyers.

That helps them keep their value relative to inflating currencies.

Part of it may be bragging rights. Owning a Ferrari or a Picasso painting is often a symbol of status and wealth.

But these assets also tend to outperform the market – especially during times of high inflation.

If your goal is to store wealth over the long term – maybe even over generations – you need to be aware that the government’s financial recklessness will lead to chronic inflation.

So make sure you own plenty of Maverick assets alongside your stocks and bonds.

One index looks at artworks made after 1945 that have sold at least twice at public auction.

On average, these artworks have grown 13.5% in value a year in inflationary periods.

And you don’t have to be a millionaire to invest in contemporary art.

You can now buy shares in iconic paintings…

One platform Teeka recommends is Masterworks.

His goal was to make investing in iconic artworks possible for everyday investors.

And Masterworks does this by buying and securitizing artworks. This allows you to own shares in a Picasso and other iconic artworks.

Over the past five years, Masterworks has bought more than 130 works of art for more than $500 million.

Since then, the value of its art portfolio has risen at an average rate of 15.3% a year.

That’s an inflation-beating return… even at today’s inflation rate of 8.2%.

But as a Daily Cut reader, you can skip the waitlist here.

When you do, you’ll get access to this Maverick investment without having to spend millions of dollars.

And if you’d like to learn more about buying shares in collectibles, Teeka has put together a presentation with all the details.

He’ll show you how you get started today for $50 or less.

Over the last two years, the Maverick assets in Teeka’s personal portfolio have outperformed all his traditional investments combined.

And he doesn’t expect that to change any time soon.

To learn more about how to get involved, go here for more from Teeka.