Chris’ note: If you’ve been following the Cut over the past year, you’ll have heard a lot about NFTs. And if you still think they’re stupid or just a fad, it’s especially important you read today’s essay.

It’s an insight from our tech expert, Jeff Brown. He first recommended bitcoin to his subscribers in 2017 – when mainstream investors and finance executives alike still shunned the crypto. It’s up 4,290% since then.

Jeff says something similar is happening with NFTs. So below, he shares why ignoring NFTs now is as foolish as passing up on bitcoin five years ago.

In 2017, JPMorgan (JPM) CEO Jamie Dimon had some choice words for bitcoin (BTC)…

“If you’re stupid enough to buy it, you’ll pay the price for it one day.”

Back then, many agreed with him. Folks called the digital asset a scam, a Ponzi scheme. Some even said bitcoin’s true price might be zero.

But I saw something different. I saw a decentralized, permissionless asset supported by a radical technology, blockchain. In 2017, I officially added bitcoin to the model portfolio at my Near Future Report advisory.

You probably know what happened next… 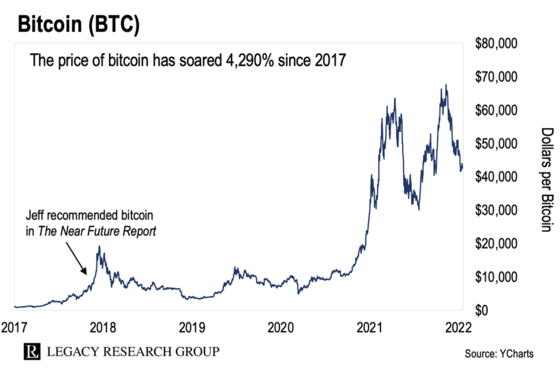 There are now several bitcoin futures ETFs (exchange-traded funds). And the asset is on the balance sheets of major companies including Tesla (TSLA), MicroStrategy (MSTR), and Square (SQ – now called “Block”).

As for Jamie Dimon? He’s singing a different tune now. JPMorgan recently became the first major U.S. bank to give its clients access to bitcoin and other cryptocurrency funds.

I tell this story because we’re seeing something similar with another innovation in the blockchain space. And ignoring this tech today would be like passing up on bitcoin in 2017.

The rise of blockchain tech enabled a unique class of digital art and collectibles to finally hit the mainstream last year.

NFTs – non-fungible tokens – are digital assets that are cryptographically secured and authenticated on a blockchain. They can include everything from images to audio recordings, videos, and much more.

In 2021, sales volumes of global marketplaces such as OpenSea and Crypto.com surged as more users began to buy NFTs. Total sales for NFTs on the Ethereum blockchain alone exceeded $23 billion last year.

And just like with bitcoin in its early years, we’ve seen a lot of mocking coverage of NFTs over the past year. But this tech will prove skeptics wrong again.

NFTs represent a revolution in the art and collectibles market. And few grasp that their applications go beyond digital collectibles.

NFTs are also a way to authenticate, represent, and confer ownership of an asset using blockchain tech. Right now, they’re mainly granting ownership of digital artwork. But NFTs are part of a larger trend of “tokenization.”

Imagine a piece of property such as a house. Typically, one person would be the sole owner of that house. A spouse may also be on the title, but that’s usually where it stops.

But if we tokenize that home, we can give fractional ownership to hundreds or thousands of NFT holders. The value of the tokens would fluctuate just like with any other security.

That’s just one example. Now imagine tokenizing commercial property, rare cars, jewelry, or even racehorses. We can tokenize and trade anything of value.

The mainstream rarely appreciates new technologies right away – as we saw with bitcoin. People scoffed even at the internet at its start.

NFTs are now experiencing their “bitcoin moment.” Many investors currently don’t understand and therefore mock them. As the market matures and better understands this tech’s applications, that’ll change.

But for investors, the time to get exposure is right now. That’s why I’ve dedicated my first investment summit of the year to NFTs.

On Wednesday, January 26, at 8 p.m. ET, I’ll share a group of NFTs that represent one of the most exciting ways to play this area of blockchain tech.

At the event, I’ll give away the name of one of my favorite tokens. I’ll even gift attendees a series of NFTs. To learn how to claim these – and the name of my free recommendation – reserve your free spot right here.

I look forward to seeing you there.