Welcome to the weekly mailbag edition of The Daily Cut.

Each week, you and your fellow readers write in to [email protected]… and we put your most burning questions to our team of analysts here at Legacy Research.

And every Friday, we publish their answers.

And your fellow readers weigh in on whether Tesla CEO Elon Musk deliberately caused the price of bitcoin to plunge.

But first, we begin with a question for the guy I call the Indiana Jones of Legacy, Dave Forest.

As a trained geologist, he spends his time crisscrossing the world looking for buried treasures.

He even looks the part. Here’s a shot of Dave in Nevada, examining the rocks in an area the NASA GOLD satellite system indicated was positive for copper and gold. 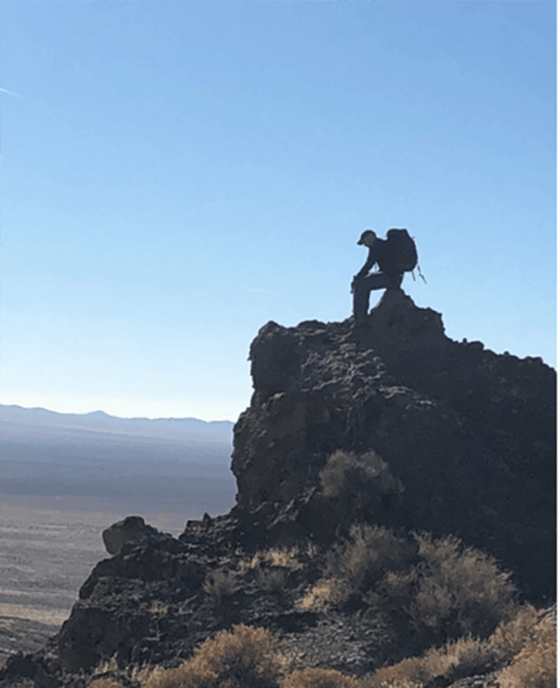 He also gave his Strategic Investor subscribers the chance at gains of 98%… 128%… and 284% on tech-metal mining stocks.

And in February, Dave gave his International Speculator subscribers the chance at a 1,019% gain on a rare earths mining stock, Rare Element Resources (REEMF).

Below, Dave suggests what the future might hold for the famously volatile metal that’s sometimes known as “gold’s crazy stepchild”…

Reader question: It would be well appreciated to have an overview of the silver industry and silver stocks to own. Thank you for your consideration.

Dave’s response: Good timing on this question, Eric. I just got back from touring several silver mining sites in Nevada… the Silver State.

Silver is the “hardest working metal in the business.” It’s a precious metal, which investors buy to hedge uncertainty or inflation. Both of which we’re staring down right now.

Silver is also a technology metal. It’s a key component for solar panels. It also has other industrial applications.

Silver performs best in those unique times when we have strong economic growth but also uncertainty. That’s exactly where we are today: reopening after COVID is driving economic performance globally, but investors are also worried about exactly what that recovery will look like.

That’s why silver prices are pushing back toward highs right now.

Investing in silver is a tricky business. There are a few large-cap silver mining stocks, but they mostly own old, depleted mines.

You could also buy a silver ETF. But these are solely driven by the silver price. You miss the power of company-specific results, which can rocket stocks higher in the mining sector.

I prefer small-cap silver plays. These usually rise along with rising silver prices, so you get the sector coverage of an ETF or large-cap stock. But these companies also benefit if they have great news from their silver projects.

One silver play I hold in my International Speculator portfolio, for example, surged over 550% in less than a month last summer. At the time, silver prices were soaring higher. At the same time, the company announced promising drill results from its silver project in Mexico.

My small-cap silver pick handily beat ETFs like the iShares Silver Trust, which gained about 70% during the same period.

Out of fairness to my paying subscribers, I can’t name the individual silver juniors I hold in my portfolio. But I can tell you, these names have demonstrated potential for the biggest gains in silver, when metals prices are on the rise – like they are today.

Switching gears, one of the big themes we’ve been getting questions on lately is 5G wireless technology.

If you’ve been following along with us for a while, you’ll know it’s one of the profit megatrends our tech expert, Jeff Brown, tracks for his readers.

Most folks will know by now that it’s the new generation of wireless internet technology. It’s about 100 times faster than our current 4G networks.

But not a lot of folks know that 5G networks have a major problem – “dead spots.”

Specifically, 5G’s lack of reliability inside buildings. You can be next to a 5G tower outside and have great data downloads… yet walk into a coffee shop less than 100 feet away… and no longer have access to the 5G network.

But as Jeff reveals below, reliable indoor 5G coverage is on its way soon…

Reader question: Is 5G destined to make its way indoors? Seems like everything I read is about how it will speed up cell phones and be good for communicating with cars and how many towers are going to be needed – outdoors, of course.

When and how does 5G get to my desktop or laptop computer indoors? Maybe you’ve covered this already, but if you did, I missed it. May be time to repeat.

Jeff’s response: Hi there, James. Thanks for writing in with your question.

Just to get new readers up to speed, 5G is the next generation of wireless technology that is currently being rolled out around the world.

And this new network is up to 100 times faster than our current 4G networks. It will also offer near-zero latency, or delay.

And in simple terms, yes, 5G will make it indoors to our personal devices like our phones and laptops (as long as they are 5G-enabled).

Most of what has been deployed around the U.S. to date has been over low bands, which results in 5G performance similar to 4G networks. Not very interesting, but it does provide wide coverage.

Verizon has been pioneering millimeter wave (mmWave)-band 5G wireless networks, which deliver the kinds of blazing fast, 1 Gbps+ speeds that 5G was designed to enable.

These types of network deployments make the most sense in dense population areas, and users have to be within range of each mmWave base station. In rural areas, though, deploying mmWave won’t be common due to the costs associated with doing so.

Where things get interesting is with C-band frequencies that provide a great balance between 5G wireless speeds and latency, and larger coverage areas with respect to the location of the base station.

C-band deployments will be well-suited to provide high-performance 5G wireless coverage in our homes.

And it will hopefully become a strong alternative for internet access instead of being held hostage by our CATV companies, which typically charge exorbitant prices for unimpressive internet service.

For those of us who live within coverage areas of these kinds of networks, fixed 5G wireless broadband will become a service offering.

5G absolutely does work indoors. But it does require that the 5G wireless network is built out in a way to provide such coverage.

And in dense urban areas, that will even mean putting 5G base stations inside some buildings.

Ultimately, building penetration will be enabled by rolling out the small cell network architecture until signal levels inside of buildings enable connectivity.

And I’ve actually confirmed that this works myself. I was even able to connect to a 5G network from the inside of an old bank, right next to the vault.

You can watch my indoor speed test below.


So while there’s still a ways to go as these networks expand their coverage, we will certainly be able to access 5G indoors.

And the infrastructure required to make 5G a reality is just one reason I think this is the biggest tech investment trend of the decade.

In fact, I’m convinced the opportunity here is actually five times bigger than I previously thought. As investors, we need to make sure we’re paying attention to 5G technology.

If you want to learn about my top 5G plays, go right here for all the details.

Next, a question for Teeka Tiwari.

He later set up his own hedge fund… before finally leaving Wall Street and starting his own newsletter.

To my knowledge, he was the first guy in our industry to recommend individual cryptos in a major financial newsletter.

And his readers are glad he took the plunge.

Teeka first recommended bitcoin to readers of our Palm Beach Letter and Palm Beach Confidential advisories back in April 2016.

But not everyone feels that bitcoin has lived up to expectations…

Reader question: I was shocked to read that it’s relatively easy for an outfit such as the FBI to trace bitcoin transactions back to you.

The whole reason I got into bitcoin was that it was portrayed as a completely anonymous way to transact, not subject to government tracking and intrusion.

I didn’t think of it as an investment vehicle – although I’m definitely not complaining about its performance in that regard. My motivation was PRIVACY. Apparently I’m a very naïve person to think that anything can escape the long arm and prying eyes of government.

Please expound on this. Are you really saying cash is a better mode of transacting privately than bitcoin?

Teeka’s answer: Hi, Hagan. You’re not wrong. A lot of folks believe bitcoin is an anonymous payment network. But it’s actually the most transparent payment network in the world.

Bitcoin transactions are stored publicly and permanently on the bitcoin blockchain. That’s the shared digital ledger where all transactions are recorded. Anyone can look at the holdings or transactions associated with the cryptocurrency wallet app you use. And from there, it’s easy to find out your real-world identity.

In that sense, yes – cash is a better mode of transacting privately than bitcoin.

Looking down the road for bitcoin, there are developments happening on the core code by way of a potential called Taproot/Schnorr. This will enhance privacy and scalability of the network by batching transactions together.

If you’re interested in cryptocurrencies that solve the problem of online payment privacy, there are plenty of “privacy coins” out there. One of them, Monero (XMR) is up nearly 2,000% since I recommended it September 2016. It uses always-on privacy to obscure sending and receiving wallet addresses and transaction amounts.

Sticking with “the king of cryptocurrencies,” we return to a question we posed in last Wednesday’s mailbag regarding bitcoin’s big drop…

Was bitcoin’s recent drop caused by a tweet that Tesla CEO Elon Musk sent out about bitcoin’s energy use?

If you recall, Musk said Tesla would suspend bitcoin as acceptable payment for its cars.

And in February, the company invested $1.5 billion of its corporate treasury in the crypto.

I asked you if you think that Musk purposely criticized bitcoin so he could benefit from a price drop.

You sent us a ton of feedback. We’ll wrap up today’s dispatch with a small selection…

Reader comment: Yes I do. Big mouth billionaire. He should learn to shut his mouth. I don’t believe that he didn’t sell some of his bitcoin before he opened his big mouth. He was the cause of this crash. These losses could take years to recoup.

Reader comment: What a scumbag. He either drove bitcoin down to buy more cheaper, or he sold at higher prices and will repurchase. I wish I could take advantage of the dip, but I cannot. I do not have extra cash.

Reader comment: Musk did the same thing with Tesla when he went on a podcast and smoked a joint. Tesla went to rock bottom, and I’ll bet he bought with both fists.

Reader comment: I bought some more bitcoin during the plunge. But I can’t help wondering if anyone is saying that Teslas are bad for the environment because part of the electricity they burn comes from coal. I know Elon would never admit that.