It’s been a “baptism of fire” for new bitcoin investors…

Though the term originated from the Bible, it became popular in the 1820s to describe a soldier’s first experience in battle.

When the bullets start to fly, you either keep your nerve and fight along with your troops… or turn on your heels and run.

Only you don’t know how things will go until you’ve plunged into the fray.

Over the past month, bitcoin (BTC) holders have been through an investor’s version of this…

On November 9, the world’s first cryptocurrency hit an all-time high of $67,617. 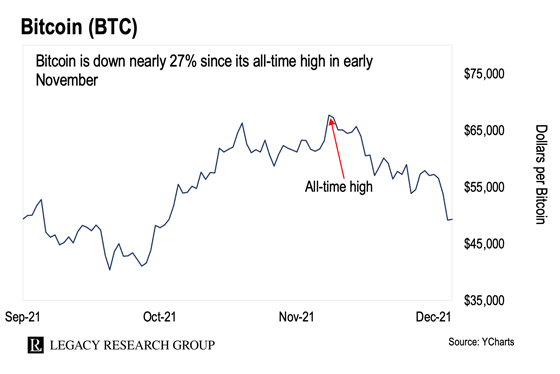 And in one 24-hour period over the weekend, bitcoin plunged 17%.

Talk about a wild ride…

For a lot of folks – especially those who are new to crypto – this can be harrowing. You may even be tempted to sell.

But rest assured… This kind of volatility is just bitcoin being bitcoin. As I (Chris Lowe) will show you today, the best thing to do as prices churn is to sit tight.

Every week, they cover dozens of big ideas about how to move the needle on your wealth.

That’s too much research for one person to get through. So my mission as Daily Cut editor is to work with my team to bring you the choicest “cuts.”

There’s no better example than crypto…

In April 2016, Teeka was the first guy in our industry to dedicate a major newsletter – Palm Beach Confidential – to recommending bitcoin and other cryptos.

That was back when one bitcoin changed hands for about $420… and crypto was even more volatile than it is today.

And from the get-go, he’s emphasized one crucial point: Volatility is the price you pay to be in with the chance to make extraordinary gains.

In other words, the only way to realize truly transformative gains as a crypto investor is to take volatility in stride.

Otherwise, you’ll panic and sell. And when folks have done that in the past, they’ve lost out.

Only folks with “diamond hands” – crypto slang for people who hold for the long term – have seen massive wins.

This is clear when you look at history…

Since then, bitcoin investors have endured eight plunges of 30% or more.

Then over about a month in June and July that year, it fell 39%… before rallying 65% to a new high.

It happened again over a couple weeks that September – this time a 41% plunge followed by a 70% rally.

I’m talking about the long and painful bear market that raged from December 2017 to December 2018. 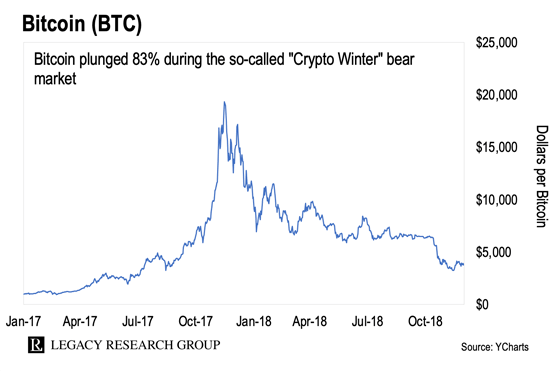 Over that time, bitcoin fell 83%. Talk about a baptism of fire…

Crypto Winter was the investment equivalent of a full-out artillery battle. It sent waves of panic through the crypto market.

Many buckled and sold. But the rewards were huge for those who listened to Teeka’s advice and stuck it out.

It’s something he’s been talking about a lot lately with our Palm Beach Confidential readers.

His longtime subscribers are among the most battle-hardened crypto investors out there. But judging by the feedback they’ve been sending in, they’re keen to know if another Crypto Winter-style drop is in the cards.

Teeka recently set their minds at ease on that front…

I don’t think that’s going to happen this time for two reasons. One, the market’s a lot smarter than it was four years ago. And two, a different type of buyer has come into this market.

Individual investors predominantly drove the last two bull markets. Now, that pendulum is starting to swing. Institutional money doesn’t dominate yet, but we’re starting to feel its impact. And institutional money thinks differently from the retail crowd. Yes, some of it is trading-oriented, and it will be fast money that comes in and out. But a lot of it will be long-term-oriented.

Soon, every major brokerage firm will offer some type of bitcoin fund or product. And we’ll see people start automatically allocating percentages of their monthly incomes to bitcoin.

This will gradually increase consistent buying – no matter what’s happening in bitcoin’s cycle.

And it’ll blunt the kind of 80-85% drops we’ve seen in the past. It’ll be a long process. But that’s the direction we’re moving in. And it’ll ultimately tame bitcoin’s volatility.

Crypto has richly rewarded many investors…

Teeka’s readers have had the chance to make 14,210% on bitcoin since he first added it to the model portfolio at Palm Beach Confidential in April 2016.

But to enjoy those gains, folks had to ride out all the volatility I outlined above.

How do you do that now? I’ll leave the last word on that with Teeka…

What we’re dealing with right now isn’t crazy volatility. It’s normal. But new people coming into bitcoin aren’t used to it. To them, a 15-30% drop feels like the 83% drop we went through in the Crypto Winter.

That’s why you have to pull back the camera and focus on the big picture. If you focus on the daily moves of bitcoin, you’ll drive yourself crazy. And you’ll do something stupid, like selling into weakness.

That’s why I’ve always looked at bitcoin through the lens of a four- to five-year holding period. I regularly ask myself, “Over that time, will any other asset beat this?” And consistently, the answer has been no.

So tune out of CNBC and Twitter (TWTR)… and resist the temptation to keep checking your crypto portfolio. The more you check it, the more tempted you’ll be to focus on day-to-day price moves.

As we’ve seen today, that can be lethal.

Instead, keep your focus on the long-term trajectory… and Teeka’s $500,000 price target. Just know that we’ll get bone-crunching volatility along the way as a matter of course.

And don’t forget about the “supply shock” about to hit…

As Teeka has been spreading the word on, it’s set to cut the amount of new bitcoin coming to market all the way to near zero in 2022.

He calls this the “Final Halving.” And he’s excited not only about what that means for the price of bitcoin. He says it will also kick off powerful rallies in a handful of tiny “altcoins” (cryptos other than bitcoin).

It’s why, this Wednesday at 8 p.m. ET, Teeka is holding a “Final Halving” Summit.

He’ll explain all the details… and discuss six under-the-radar altcoins that could be among his biggest winners yet.

Plus, event VIPs will get a special halving report just for showing up.

Event attendance and VIP status are free. But you must reserve your spot.

To learn more about how to do that, read on here.