The S&P 500 just hit its highest level in history…

Early in this morning’s session on Wall Street, the S&P 500 breached the 3,000 point mark.

It’s an all-time high for the index – our regular stand-in for the U.S. stock market.

And that’s not the only reason it’s bound to get endless play on cable news. It’s also the kind of psychologically important round number we humans pay attention to.

But despite this new milestone, the U.S. stock market is on shaky ground.

In fact, as master trader Jeff Clark warns below, the S&P 500 will likely be lower at the end of the year than where it is today.

We’ll show you why in today’s dispatch… and what you can do about it.

Stocks surged after the Fed hinted that rate cuts were coming…

This morning, Fed chief Jerome Powell was up on Capitol Hill. Here’s what he told lawmakers…

Many FOMC participants saw that the case for a somewhat more accommodative monetary policy had strengthened.

Let’s translate that into plain English.

The FOMC is the Federal Open Market Committee. It’s the group of 12 members that votes on interest rates. And “accommodative monetary policy” is Fed speak for lower rates.

As is usual when the Fed cuts rates, folks in the mainstream financial media were quick to get their pom-poms out.

Among the cheerleaders was Mad Money host Jim Cramer. As he put it live on CNBC after the S&P 500 broke the 3,000 mark this morning…

Let’s go back and play the tape of all the people who’ve been negative. It’s painful. And they stay negative. And they keep finding reasons to be negative. But stocks keep going up.

And stocks aren’t just going up, according to Cramer. They’re going up because the Fed is cutting rates.

“Powell did this,” he told CNBC viewers, referring to the new S&P 500 record.

That’s the mantra now on cable news – rate cuts are all the stock market needs to keep powering ahead.

And that should be the big story here.

Powell said so himself in his testimony. He cited “uncertainties around trade tensions” and “concerns about the strength of the global economy” as reasons for the Fed’s dovishness. 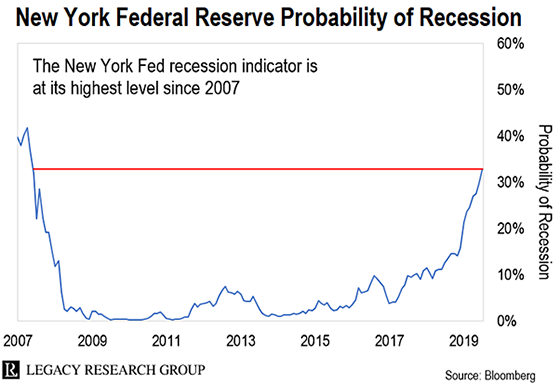 This indicator tracks the probability of a recession within the next 12 months. And it’s at its highest level since 2007 – the last time the economy hit the skids.

That’s just not the way the world works. As Legacy Research cofounder Bill Bonner has been telling our Bonner-Denning Letter readers…

We have these fake booms. They’re caused mostly by the Fed’s inflation. And fake booms caused by fake money always lead to a bust. These busts can happen in different ways. And it’s hard to tell when they’ll strike. But there are no exceptions.

And the longer the Fed keeps at it, the bigger the disaster that awaits.

It’s why Bill and his coauthor at the Bonner-Denning Letter, Dan Denning, are urging readers to limit their exposure to stocks. They recommend putting no more than 25% of your investment portfolio into stocks.

They also recommend holding another 30% of your portfolio in gold and tangible assets. These are great ways to protect yourself from the Fed’s inflate-or-die policy.

(If you’re a Bill and Dan subscriber, you can catch up on their full asset allocation recommendation here.)

And as regular Cut readers know, he’s no stranger to stock market crashes…

And right now, Jeff is not buying the mainstream line that the coast is clear for stocks.

As he’s been showing readers of our Market Minute trading e-letter, strong starts to the year are usually followed by lousy third quarters. Jeff…

We were bullish heading into last month. And, my goodness, what an amazing month it was for the bulls.

The stock market performed better this past June than during any other June over the past 20 years. The S&P 500 gained almost 7% – in just one month. For the quarter, the stock market ended up almost 4%.

Add to that the gains during the first quarter of the year, and the market is up more than 17% so far in 2019. That’s one of the best first-half performances EVER.

That may sound like good news. But wait until you hear what Jeff told his readers next…

The bad news is that these sorts of first-half results often lead to steep declines during the third quarter of the year.

For example, if we take 2019 out of the mix and look at the top five first-half performances of the past 60 years, the S&P 500 fell an average of 7.5% during the third quarter in four of those five years.

It’s why Jeff believes the S&P 500 is likely to be lower by the end of September than it is today.

We don’t say any of this to scare you…

In fact, Jeff says you should look forward to bear markets. Because if you know how to trade them, they’re opportunities to make outsized gains.

As you saw above, Jeff’s a pro at this. And tomorrow, he’s hosting a free Q&A.

This kind of event is normally for subscribers only. But this time, Jeff’s opening it up to anyone who wants to tune in.

On the call tomorrow, he’ll be answering your questions live. You’ll also get to hear his unfiltered outlook on the market. And he’ll share what he thinks will be the top trading strategies for this year and beyond.

But he’s also doing something else that’s new…

Unlike his previous Q&As, he’ll be able to “share” his screen with you. So if you have a question about a certain sector or trading strategy, he’ll be able to show you an example in real time, using his own tools.

So don’t miss it. Submit your questions in advance at [email protected]. And tune into the Q&A at 2 p.m. ET tomorrow on this page.

P.S. You may recall we recently passed on an excerpt from Bill’s new book, Win-Win or Lose. (Catch up here.)

As Bill puts it, his book explores a modest theory of civilization – from the dawn of the human species to the height of modern society. And he shows what happens to those who ignore the rule of “win-win”…

If you’re a Bonner-Denning Letter subscriber, you got first dibs back in May. You can read the whole thing for free, with Bill’s compliments, here.

If you’re not a Bill and Dan subscriber, you can now pick up a Kindle edition of Win-Lose right here.