It’s one of the biggest mistakes rookie investors make…

They think successful investing is about what you buy.

But as the old-timers on Wall Street will tell you, it’s what you pay that really matters.

It’s simple… Provided the issuing company doesn’t go bust, the less you pay for a stock, the higher your profits will be when you go to sell.

Buying at bargain prices also protects against downside risk. The cheaper something is when you buy it, the less it can fall from there.

That’s why our mission here at The Daily Cut is to hunt for market megatrends the mainstream still hasn’t latched onto.

These ideas are still on the fringe. So prices are still low… ensuring you maximize your profits.

Value investor Howard Marks is worth more than $2 billion. He made this fortune at his storied Oaktree Capital Management investment firm by internalizing this simple, but powerful, truth. As he puts it…

With that in mind, today we’ll shine the spotlight on one of the few corners of the market where you can “buy well” – gold mining stocks.

As you’ll see, the last time the stars aligned for these stocks like they are today, an index of blue-chip gold miners saw 320% gains over two years.

And because they’re still cheap relative to the rest of the stock market, you don’t have to take big risks for a chance at these explosive returns.

First, it’s important you understand the big-picture case for gold…

That’s because governments around the world are trying to boost economic growth in response to the coronavirus pandemic. They’re doing that by digitally “printing” boatloads of fiat-currency cash.

Their plan is to devalue that cash over time (aka create inflation) to incentivize you to rush out and spend.

For a currency to work as money, it must be a store of value. And with fiat currencies in the hands of central bankers, they fail this crucial test.

Combined, central banks have pumped the equivalent of $12 trillion into the global economy this year alone. That’s more than the $9 trillion they digitally “printed” in the eight years following the 2008 financial crisis.

Investors are paying attention. The price of gold has risen 22% so far this year in dollar terms. That’s more than double the gain for U.S. stock market bellwether the S&P 500.

Gold stocks give you extra oomph over the gold price…

This is a hugely important point… Gold and gold stocks are not the same.

At Legacy, we recommend all our readers own some gold as part of a balanced portfolio. That can be in the form of gold bars or coins.

You can also own gold via your broker through a gold-backed exchange-traded fund (ETF) such as the Sprott Physical Gold Trust (PHYS).

But we also recommend you own some gold stocks as a more speculative play on a rising gold price.

When the gold price goes up by 1%… gold mining stocks tend to go up by more than 1%.

Take a look at the bull market in gold in the wake of the 2008 financial crisis. 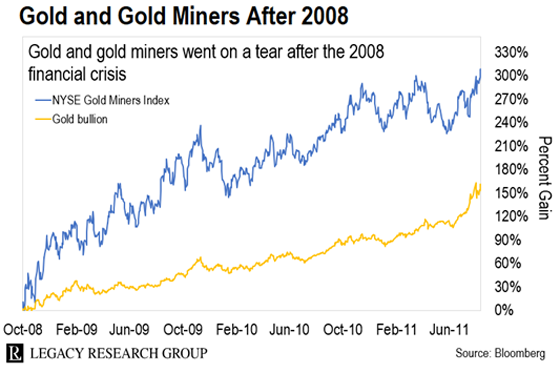 But it’s not all gravy… The same thing happens in reverse. If gold goes down by 1%… gold mining stocks tend to go down by more than 1%.

That’s why I say gold mining stocks are highly speculative. These are far higher-risk, higher-reward bets than gold.

I don’t mean it in the sense that they’ve borrowed lots of cash.

Here’s how it works…

A gold mining company has fixed costs to mine an ounce of gold. It doesn’t matter if gold is selling at $1,000 or $1,500 an ounce… that cost stays the same.

This causes profits (what’s left after you deduct costs from sales revenues) to explode higher.

This sends the company’s shares surging, too. And it makes gold miners some of the most explosive stocks in the world when the gold price is rising.

As I mentioned up top, the way to make real wealth over time as an investor is to “buy well.”

And gold mining stocks haven’t been this good of a value relative to the overall stock market in 15 years.

It’s all in this chart that our head of research here at the Cut, Michael Gross, put together.

It compares the valuations of the NYSE Gold Miners Index and the S&P 500. 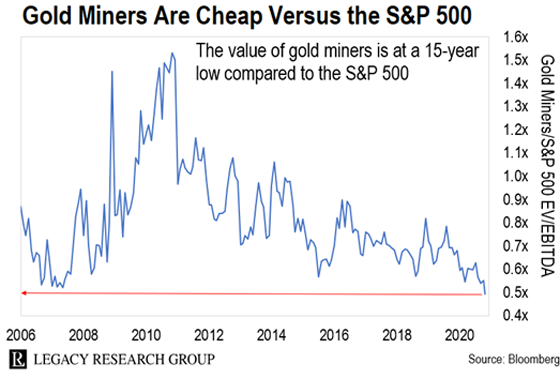 Here’s Michael with more on that…

I’ve used enterprise-value-to-EBITDA (EV/EBITDA) to get a sense of relative values. It looks at a company’s value relative to its cash earnings. Then I created a ratio out of these two valuations.

Gold miners earn 27 cents off each dollar they make in their normal day-to-day operations. That’s more than double the 11% of the average S&P 500 company.

And gold miners have built rock-solid balance sheets. They have more than double the amount of short-term assets to cover all their debts in the coming year. Again, that’s more than the average S&P 500 company.

And it’s not just Michael who has spotted this setup. Colleagues Teeka Tiwari, Tom Dyson, Dave Forest, and Nick Giambruno have all recommended their readers buy gold stocks. That’s why I want to make sure this is front and center on your radar right now.

The amount you can lose on a gold mining stock trade is limited because you’re buying in at the lowest valuations in 15 years. But the profit potential is huge.

How to play it…

If you haven’t already, make sure to pick up some gold mining stocks.

If you’re a Teeka, Tom, Dave, or Nick subscriber, you can access their gold stock recommendations in the model portfolios they share with you.

A second-best option is to buy shares in the VanEck Vectors Gold Miners ETF (GDX). It tracks the performance of the 52 largest gold miners in the world.

And keep an eye on future updates for more from me on the opportunity in gold stocks. There’s a lot more upside ahead.