88 years ago this week, it became a crime to own gold…

On April 5, 1933, President Franklin D. Roosevelt scratched his signature at the end of Executive Order 6102.

This was during the Great Depression. FDR had declared a national emergency.

The order read, in part…

I, Franklin D. Roosevelt… declare that said national emergency still continues to exist and… hereby prohibit the hoarding of gold.

FDR’s decree forced law-abiding Americans to take their gold savings to a bank and swap them for paper U.S. dollars at the fixed exchange rate at the time.

This ban lasted until President Ford reversed it with Executive Order 11825. Ford signed that order on December 31, 1974 – more than 41 years later.

Judging from the reader feedback we’ve been getting… a lot of folks fear the feds could come after gold again. For example, this from Legacy subscriber Steven B…

Why won’t the feds confiscate gold again? With the government knowing everything about us it seems easy to do.

Legacy readers aren’t worried about only their gold…

What would stop governments from making crypto illegal? It seems to me no asset is guaranteed against a rogue government. Is there any way to be truly safe?

I’ve read dozens of other emails like this from worried readers. So in today’s dispatch, I (Chris Lowe) want to put you at ease once and for all.

As you’ll see, the feds may have the legal power to ban these alternative currencies. But the reason FDR had for confiscating Americans’ gold no longer exists.

I can’t tell you there’s a zero chance of the feds banning gold or bitcoin. Anything can happen. But the confiscation risk today is vanishingly slim.

To understand why, it’s important you know the historical backdrop.

Every dollar the feds issued was backed by gold bars in government vaults like the one at Fort Knox in Kentucky. 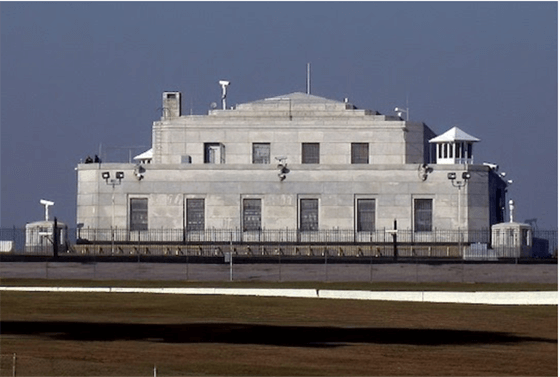 The government agreed to convert the dollars it issued to gold at a fixed exchange rate of $20.67 an ounce.

This isn’t just a minor detail… It’s an entirely different money system from the “fiat” – or unbacked – system we’re on today.

And it was the now defunct Gold Standard that forced FDR to go after citizens’ gold.

The Great Depression was the worst crash in history…

Just as President Trump and President Biden did during the COVID-19 crisis, FDR wanted to print dollars to boost spending… and growth.

But he had a problem: The Gold Standard money system meant gold had to back every new U.S. dollar. If there was no more gold, the government couldn’t print more dollars.

So FDR wanted to get as much gold as possible into government vaults.

Otherwise, the U.S. would have been forced off the Gold Standard. This is what happened to Britain in 1931. It could no longer back the pound with sufficient gold.

First, the Government Publishing Office printed up millions of copies of his decree confiscating gold. 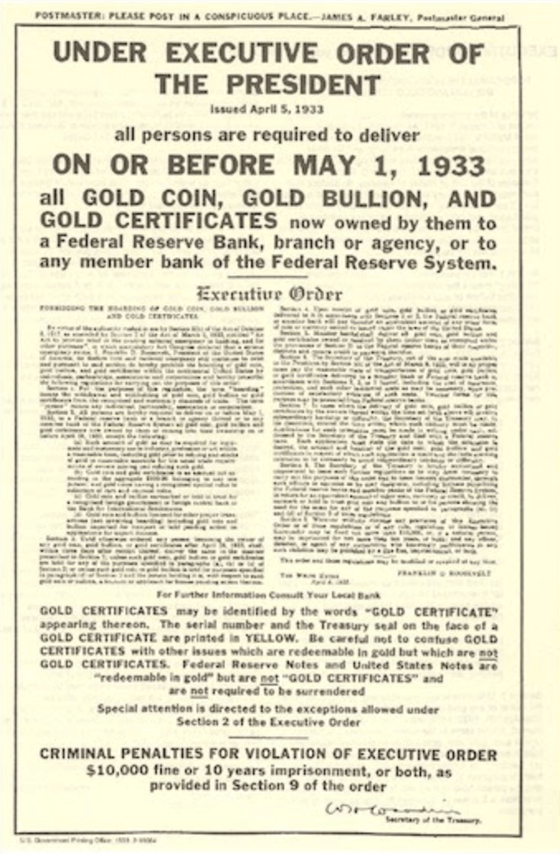 After reading it, Americans obediently lined up outside banks to hand over their gold for the going rate of $20.67 an ounce.

Within six months, the Department of the Treasury had taken in about 60% of privately circulating gold in the country.

Then came the knockout punch… After FDR confiscated Americans’ gold, he jacked up its price.

By January 1934, the fixed rate at which the government exchanged dollars for gold had risen by almost $15 to $35 an ounce.

In other words, the dollar now became cheaper versus gold.

This translated to a roughly 75% devaluation of the dollar from the level it was at in April 1933.

So the distinction I made earlier is key…

If President Biden wanted to, he could cook up a legal pretense for banning gold or bitcoin.

FDR claimed Executive Order 6102 was legal under the Trading With the Enemy Act of 1917. This banned Americans from trading with Germans in World War I.

Even though that war ended in 1918… Congress and the Supreme Court went along with FDR’s claim.

So, if the government wanted to, it has the means to cook up some legal reason to ban gold or its modern equivalent, bitcoin.

But it no longer has motive to do it.

In 1971, President Nixon ended the Gold Standard. Since then, Washington can digitally “print” as many dollars as it wants.

Gold has nothing to do with it. Same goes for bitcoin.

Tom writes our Postcards From the Fringe e-letter.

It’s where he chronicles his perpetual world tour with his family. It’s also where he writes about the roughly $1 million bet – almost his entire life savings – he made on gold in 2018.

If he’s not worried about his gold being taken from him, you shouldn’t be either. Tom…

The government confiscating gold just isn’t on my radar at all. I guess they could confiscate it. They’ve done it before. So it must be possible. I just don’t think the government cares about gold anymore. It’s at best a mosquito biting their ass while they’re in a knife fight.

The numbers back it up…

There’s about $90 trillion circulating right now. The entire global gold market is worth only about $12 trillion.

If gold is a mosquito, bitcoin is a flea…

At today’s price, bitcoin has a market value of about $1.1 trillion.

And bitcoin doesn’t stand in the way of the government doing stimulus.

The price of bitcoin might rise as folks look for inflation protection. But that’s different from what was going on in the 1930s with gold and the Gold Standard. So the comparison to Executive Order 6102 doesn’t make sense.

Don’t get me wrong… There have been rumblings from the feds about bitcoin. Most recently, Treasury Secretary Janet Yellen said she feared bitcoin could be used for “illicit finance.”

And she’s just one of a long list of Washington and Wall Street elites who like to trash-talk bitcoin.

But keep in mind that bitcoin is computer code…

And legally, code is classified as speech.

So even if President Biden cooked up some legal cover for moving against bitcoin, there’s a strong chance the Supreme Court would block him.

As our crypto expert, Teeka Tiwari, explained in last Friday’s Daily Cut mailbag edition, the bitcoin network is also decentralized and spread over many countries.

So the nuts and bolts of banning it are extremely complicated… difficult… and likely to prove futile. Teeka…

Each “node” – or computer – in the bitcoin network retains a copy of the blockchain ledger. That’s the record of all bitcoin transactions. It shows who has how many bitcoin.

The bitcoin blockchain has 11,558 nodes across the world. So to kill bitcoin, a government would have to shut down every node. That’s impossible.

If you’re worried about government agents coming after your gold or your bitcoin, you can sleep easy.

A new ban is not entirely impossible. But it’s not at all likely either. So just as you shouldn’t go around worrying about being struck by lightning… don’t let a gold or bitcoin ban keep you awake at night.

And next time someone brings up Executive Order 6102 as evidence this ban will happen… you can tell them the reason for banning gold back then simply doesn’t exist anymore.

It’s all to do with a monetary system that hasn’t existed for more than half a century.