He’s profited from just about every type of market you can imagine – from gold mining… to cannabis… and even uranium.

And his most successful strategy has generated more wealth for him than the average person could spend in 20 lifetimes.

In today’s dispatch, an opportunity to put that strategy to work right now… and set yourself up for a windfall of profits in the years ahead.

In short, Doug looks for opportunity in crashes, panics, and collapses…

In 1979, he wrote a bestseller called Crisis Investing on the subject. He also launched a newsletter of the same name – which we publish to this day.

Here’s how he explains it…

Speculating in crisis markets is the ultimate way to be a contrarian, which means buying when nobody else wants to buy.

It is true, as a general rule, that you want to “make the trend your friend.” But there always comes an inflection point when trends change because a market becomes either greatly overvalued or greatly undervalued. And when any market is down by 90% or more, you’ve got to reflexively look at it, no matter how bad the news is, and see if it’s a place where you want to put some speculative capital.

For example, back in the 1980s, Doug put this idea to work in Hong Kong.

Much like it is today, the city was wracked by protests at the time. And Doug took advantage of the turmoil and scooped up a penthouse apartment above the Royal Hong Kong Yacht Club for $40,000. He put another $40,000 into renovations.

And right now, we’re seeing a similar setup in one of the most explosive sectors of the market – legal cannabis.

It’s one most profitable market trends we track for you…

And as regular readers know, we’re long-term bulls on the legal cannabis sector.

Cannabis is now partially or fully legal in 21 countries and 34 U.S. states.

And as we’ve shown you, we’re still in just the early innings in the trend toward legalization. We also expect to see legal cannabis laws on the books at the federal level in the U.S… as well as in Europe, Australia, and South America.

And this will mint a new class of millionaire shareholders as cannabis comes out of the shadows and goes mainstream.

But cannabis stocks have taken a beating in 2019.

For most folks, that’s a reason to turn tail and run. But for crisis investors, it’s an opportunity to buy at bargain prices.

The crisis in cannabis stocks is captured in the following chart…

It’s of the MJ Pureplay 100 Index. It tracks the returns of 100 top global cannabis companies.

That makes it a useful benchmark for the legal pot stock sector. 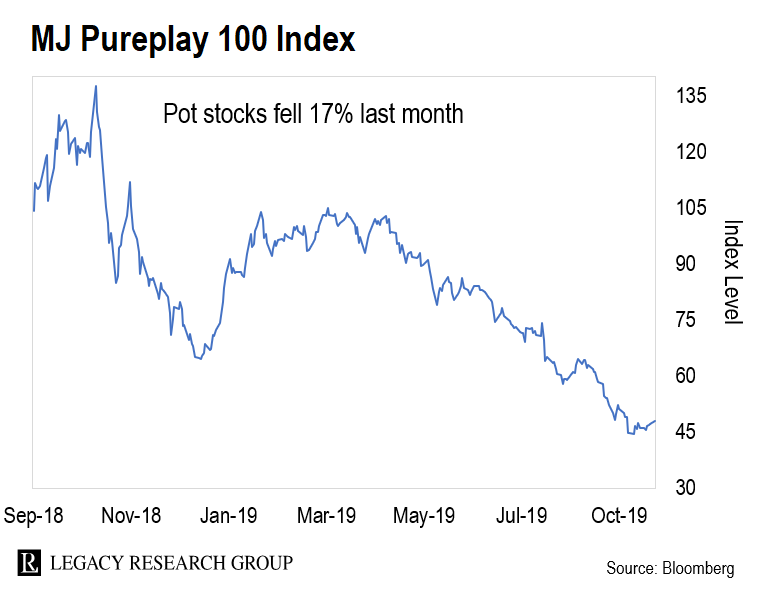 As you can see, pot stocks fell 17% last month alone.

And so far this year, pot stocks have underperformed our regular stand-in for the U.S. stock market, the S&P 500, by 50%.

If you’re already invested in the sector, it’s easy to feel panicked by these moves. But that’s the worst thing you can do.

Instead, think of events like these as the forest fires of capitalism. They’re devastating to go through. But they leave the sector healthier by purging it of speculative froth.

It’s no big surprise that cannabis stocks are volatile…

The first thing to understand is that new markets with the potential to deliver triple- and even quadruple-digit returns also experience dramatic price swings (aka volatility).

These booms made investors rich. But to get there, you had to ride out bone-rattling volatility along the way.

This includes swings to the upside… as well as the downside. There’s simply no getting away from it.

Since March, there have been a couple dozen reported deaths in the U.S. from vaping. A further 1,000 Americans have suffered serious lung injuries.

Folks are using small pen-shaped batteries to heat cartridges filled with liquid. These contain THC (one of the cannabis compounds that gets you “high”), CBD (a cannabis compound folks use to treat pain and anxiety), or nicotine.

The Food and Drug Administration (FDA) and the Drug Enforcement Agency (DEA) have started investigations into these vaping-related deaths. And the Centers for Disease Control and Prevention (CDC) has warned folks to stop using vape pens.

Meanwhile, Washington, Colorado, and Michigan – along with other states – have banned certain vaping products. President Trump is even eyeing a federal ban on sales of vape pens to minors.

But the vaping crisis is overhyped…

But Nick Giambruno, who took over the reins of our Crisis Investing advisory from Doug, has been tracking this story closely. And as he recently told his readers, some context is useful. Nick…

Eleven million people vape in the U.S. So far, there have been 24 reported deaths. That’s about 0.00022% of the total vapers.

I’m not trying to diminish the suffering this crisis has caused to the victims. Instead, I’m trying to illustrate that it has only affected a tiny minority of users.

And there’s a glaring fact about the vaping deaths that the mainstream media has overlooked. Nick again…

There’s a simple fact the media hype overshadows. Vaping didn’t cause the crisis. Counterfeit products laced with unknown chemicals did.

Unscrupulous dealers have taken advantage of the CBD and broader cannabis craze to sell cheap copies. Investigators believe Chinese knockoffs of brand-name vaping pods – as well as black-market cannabis pods – are behind the crisis.

In short, this crisis will blow over. And pot stocks will take off again.

But it’s easy to see why investors are spooked…

Cannabis derivatives make up about half of all cannabis sales.

Derivatives are non-dried-flower cannabis products. These include vape products, as well as edibles, beverages, tinctures, and other concentrates.

And vape products make up about half of all cannabis derivative sales.

So it’s natural for investors to fret about the effect of the vaping crisis on cannabis companies.

But as Nick has laid out (paid-up Crisis Investing subscribers can catch up in full here), investors will soon realize that the vape crisis is not about legal vaping. And they’ll see that it’s really about illegal, unsafe, counterfeit liquids.

Meantime, there are plenty of catalysts for higher prices…

For instance, lawmakers have introduced a bill to legalize recreational cannabis in Pennsylvania. This would make it the 12th U.S. state to allow recreational use of marijuana.

And nine more states are looking at making cannabis legal in some form next year. They include Florida, New Jersey, and New York.

That means, in about a year, there could be more than 40 states with some form of legal cannabis. And at that stage, there’s going to be huge pressure on the folks up on Capitol Hill to make cannabis legal at the federal level.

And as Nick has been showing his readers, it’s not just in the U.S. that cannabis legalization is going ahead…

Meanwhile, Mexico is on the verge of becoming the next major country to legalize cannabis.

And cannabis legalization in Mexico is a HUGE deal for the industry.

After Uruguay and Canada, Mexico will be the third country in the world to fully legalize cannabis. But Mexico is much bigger than either of those countries.

Around 125 million people live in Mexico. That’s roughly 3.5 times more than Canada. That would make Mexico the biggest legal cannabis market in the world. I expect it to happen soon. If not by the end of the month, then by the end of the year.

So keep the big picture in mind the next time you tune into a news story about the vaping crisis… or about the price falls in pot stocks this year.

As Nick says, they’re giving us crisis investors a golden opportunity to get in at bargain prices.

After all, the MJ Pureplay Index soared 838% between February 2016 and October 2018. The best stocks in the index soared even higher.

Just remember that pot stocks are going to stay highly volatile until this market matures. So always keep your positions small. And never invest money you can’t afford to lose.