Gold is close to being in a bear market…

A bear market is a fall of 20% or more from a recent peak.

And our favorite precious metal, gold, is perilously close to that level. 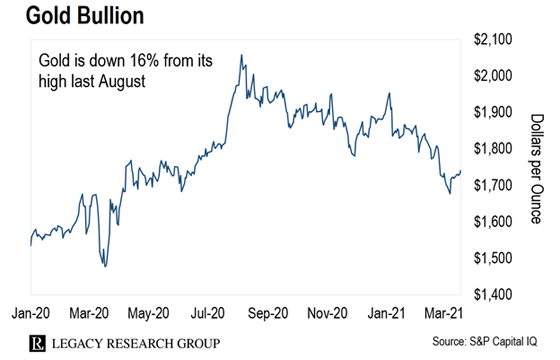 As you can see, gold has dropped 16% since its high last August.

That’s downright odd… The national debt and Fed money-creation have hit unprecedented levels. People are worried about inflation. These are usually bullish factors for gold.

So what gives? Is gold no longer any use? Is it time to dump your bars and coins?

These are the thorny questions we’ll attempt to answer in today’s dispatch.

If you’re a new reader, welcome aboard…

The Cut is where you’ll find their best moneymaking and wealth-protection ideas, daily, in your inbox and online.

We cover everything from crypto… to tech… to commodities… to pre-IPO deals… to legal cannabis stocks.

And since we first launched the Cut in August 2018, I (Chris Lowe) have been spreading the word on why it’s key to have some gold in your portfolio.

That’s not a reference to its physical hardness. It means gold is hard to produce more of relative to its existing supply.

So it’s a safe haven for folks worried about the ballooning supply of “fiat” – aka government-issued – currencies.

That’s why the weakness in the gold market is such a puzzler.

Right now, governments and central banks are pumping unprecedented levels of stimulus into the economy.

The numbers are staggering. Let’s start with the “fiscal,” or government spending, side…

U.S. government debt is at $28 trillion and counting…

That’s the highest it’s ever been… and a jump of $4.6 trillion over last year.

I know folks throw around gargantuan numbers like this a lot. And on their own, they may not mean a lot. But consider this… 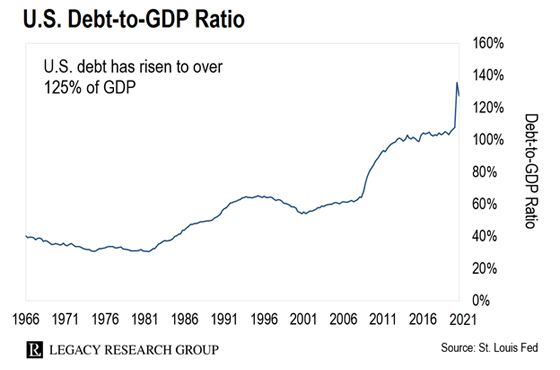 And as you can see, the debt-to-GDP ratio has gone up almost vertically since the pandemic began.

That’s the result of all the stimulus spending Washington has been doing.

Meanwhile, the Fed is setting its own stimulus records…

Here’s another chart you would expect to make investors rush into gold.

It shows how many dollars the Fed has created and used to buy bonds and other financial assets – aka quantitative easing (QE). 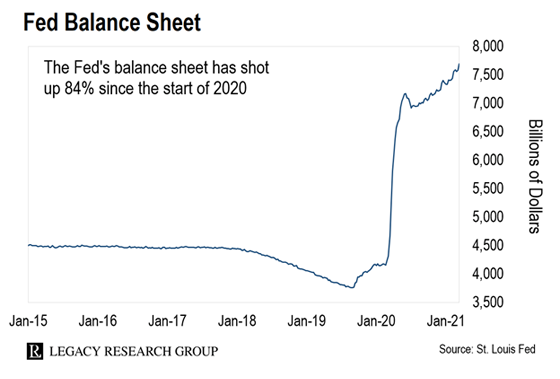 In 2015, the Fed’s balance sheet hit a record high of $4.5 trillion. This was the result of all the stimulus it did after the 2008 global financial crisis.

And it got as low as $3.7 trillion, as the Fed mopped up some of that stimulus.

But last February… as stocks plunged on coronavirus fears… the Fed leapt into action like never before.

It did another $4 trillion in stimulus. This took its balance sheet to a record high of nearly $7.7 trillion.

And the Fed isn’t done yet…

Fed chairman Jerome Powell has promised another $120 billion a month in QE. That’s as much as $1.4 trillion a year.

So why the heck is gold falling?

Like with everything else in financial markets… there isn’t one easy answer.

But the interest rate folks are able to earn on Treasury bonds above the rate of inflation – aka the real interest rate – sure looks as though it has something to do with it. 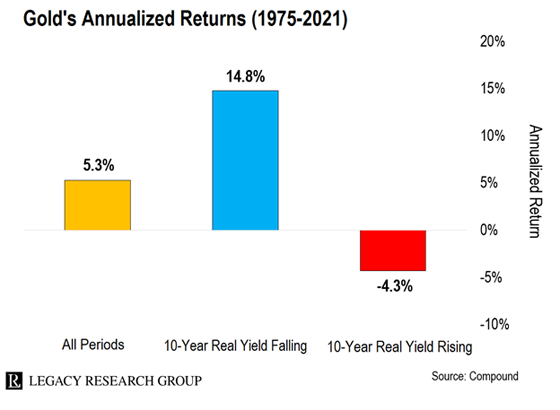 It goes back to 1975, when gold started trading again after a four-decade ban.

It shows gold’s annualized returns when the real yield on the 10-year Treasury note is rising (red bar).

And it compares them with times when the 10-year real yield is falling (blue bar) and all periods (orange bar).

That makes sense when you think about it…

Real interest rates are the best measure of the income you get for owning Treasury bonds. That’s because they already factor in the inflation that can erode the buying power of the dollars you receive in income.

In a world of rising real interest rates, investors are getting paid more to own bonds.

Gold, on the other hand, pays no income. So it’s less attractive on a relative basis.

You can see it in this next chart of the real rate on the 10-year T-note. 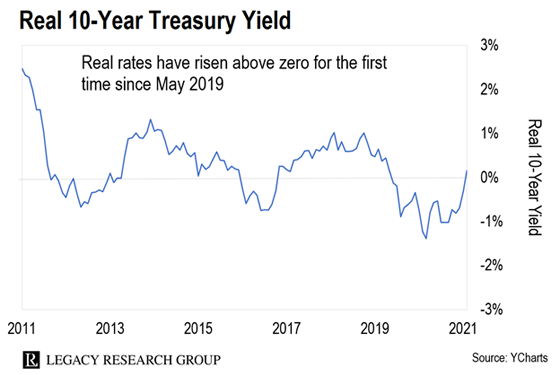 The 10-year real yield hit a low of -1.94% in July 2011. That was one month before the peak of the last gold bull market, which began a seven-year bear market in the metal.

As you can see, the 10-year real yield hit another low of -1.18% at the start of last year. And gold is heading south again.

So should you dump your gold?

If you’re a longtime reader, you’ll know Tom believes we’re on the cusp of the mother of all rallies in gold.

That’s why, in 2018, he made a $1 million bet on gold, silver, and precious metals mining stocks.

Tom is so confident gold will rise, he launched a special-situations advisory, Tom’s Portfolio. Its main goal is to help folks profit from the boom in gold he sees ahead.

Naturally, with gold down 20% from its peak last year, his readers want to know what’s going on.

Here’s an email Tom got from a reader in Australia…

I bought gold with Australian dollars. There has now been a 27% decrease in gold in Australian dollars, completely wiping out all the gains from the previous year during that bull run. This has left me down 19% to date.

I know it is a long-term play, but when you’re starting 20% behind the eight ball, it is a long way to come back. I just would like your genuine take on all of this because I heard you say before that it won’t matter what currency you’re invested in; gold is still going to rise substantially.

Gold is having a bad run lately as real interest rates rise. But Tom isn’t too worried.

We’re now in the reflation stage of the boom-bust cycle. [That’s when all the stimulus hitting the economy sends asset prices soaring.] In the reflation stage, risky things like commodities, tech stocks, energy, junk bonds, and industrials do best. And currencies like the Australian dollar, which are leveraged to industrial commodities and global trade, also do well.

Gold and U.S. dollars do not do so well. They’re defensive investments. And in the reflation part of the cycle, people aren’t seeking safety.

But Tom isn’t selling his gold…

He believes now is when you need gold the most…

With all my capital tied up in gold and silver, I have missed out on the huge gains in bitcoin (BTC), Tesla (TSLA), and the stock market. And my experience tells me these trends still have further to run. Maybe even another six months or a year.

But if it’s any comfort, this is all temporary. Everything will reverse sooner or later, when the next deflationary shock comes. Gold will shine again, even in Australian dollars.

I know I’ve been a broken record on it. But you own gold as “disaster insurance” for your portfolio.

Now, I’m not suggesting you go “all in” on gold, like Tom. He’s a seasoned speculator who’s able to handle that kind of bet.

But when the party on Wall Street finally ends… and the bubble bursts… you’re going to be happy to have some gold in your portfolio.

As you’ll see later in the week, though… not everyone at Legacy agrees with Tom that gold is the best disaster insurance on offer…