It ain’t over ’til the fat lady sings…

President Trump will likely fight the election results in the courts every inch of the way.

But our base case scenario here at the Cut is that Joe Biden will be the 46th president of the United States.

Depending on your political views, you’re either elated or devastated.

But if you’re a longtime reader, you’ll know our beat isn’t partisan politics. It’s figuring out where the world is headed so you can profit and really move the needle on your wealth.

So this week, we’re going to look at how a Biden administration would affect the profit themes we track for you.

Today, I (Chris) will show you why last week’s elections are good news for one of our favorite sectors – tech.

Then later this week, we’ll look at what the election means for two of the other opportunities we track – the long-term bull markets in cryptocurrencies and gold.

But before we get into all that, an important reminder…

Biden may have won, but there was no “blue wave” last week…

Folks in the mainstream media were calling for a “blue wave” election ­– a Democratic sweep of the presidency, the Senate, and the House.

But the blue wave never showed up.

Democrats may have clinched the White House and held their majority in the House of Representatives. But the GOP looks set to hold the Senate.

Factoring in wins from this election, Republicans hold 48 Senate seats versus 46 for Democrats. Independents hold 2 others. (Four races are still being determined, for a total of 100 seats.)

So unless the Democrats can force a tie by winning the two runoff races in Georgia slated for the first week of January – a long-odds bet – Republicans will keep control of the Senate.

That means divided government in Washington.

A president needs approval from majorities in the House and the Senate before he can sign bills into law.

So far, Mr. Market seems fine with how things are shaking out…

The chart below tracks U.S. stock market bellwether the S&P 500.

Take a look at what’s happened going back to Election Day. 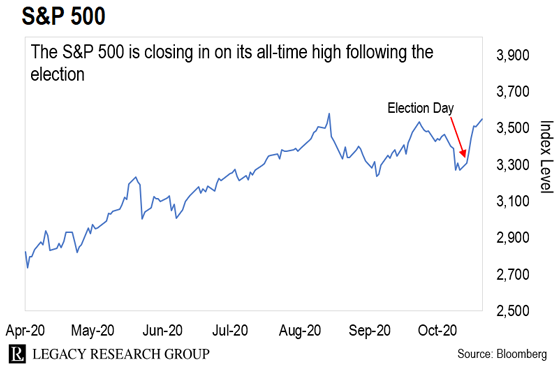 The stock market is closing in on a new high.

Part of what sent stocks higher today is news from German biotech company BioNTech (BNTX) and U.S. drugmaker Pfizer (PFE). They say the COVID-19 vaccine they’ve been working on together is “90% effective.”

But the S&P 500 is up 7% since Election Day. If investors hated the prospect of deadlock in Washington, they have a funny way of showing it.

Democrats have made no secret of their plans to break up Big Tech firms.

Democratic presidential hopefuls Elizabeth Warren and Amy Klobuchar made it a central plank of their primary campaigns.

And last October, the Democratic-led House Antitrust Subcommittee compiled a report many saw as a roadmap for tackling Big Tech monopolies.

It called for breaking up Facebook (FB), Google (GOOG), Amazon (AMZN), and Apple (AAPL). It also called for restricting them… or even banning them… from mergers and acquisitions.

As long as the Senate stays red, that’s not going to happen.

Republicans have their own beef with Big Tech. For instance, they suspect social media giants Facebook and Twitter (TWTR) conspire to silence conservative voices.

But it’s unlikely Senate Majority Leader Mitch McConnell will be in the mood to further Biden’s agenda. More likely, he’ll dust off his playbook from the Obama years. He’ll aim to make Biden a one-term president by frustrating his agenda wherever possible.

Tech giants have some of the lowest effective corporate tax rates. For instance, Netflix (NFLX) pays out just 9.5% of its profits in taxes. Microsoft (MSFT) pays just 10.2%.

That’s less than half the statutory rate of 21%.

And that’s still higher than Amazon. In 2018, it managed to pay $0 in federal income taxes.

This is rocket fuel for profits… because more sales revenues fall to the bottom line.

With a Republican-led Senate, any tough new tax legislation is sure to fail. That means fat profits for tech will remain.

That’s good news for ALL investors…

Longtime readers will know we here at the Cut are no fans of Google, Facebook, and other Big Tech companies.

As I’ve been banging on about for years, they’re surveillance operations masquerading as tech services companies.

Where Big Tech moves, the rest of the market follows. This is due to the heavy weightings of stocks in the tech giants.

It’s the world’s most widely followed gauge of “the U.S. stock market.” And it’s heavily weighted – or skewed – toward tech.

If it was equally weighted, the pie would be made up of 500 equal slices – one for each of the companies the index tracks.

Instead, each slice is a different size depending on a company’s market value, or “capitalization.”

As you can see, the five largest U.S. stock companies – Facebook, Apple, Amazon, Microsoft, and Google – together make up 23% of the S&P 500.

In short, tech is still a great place for your money…

Around election time, there’s a lot of uncertainty and worry about what the results will mean for certain stocks and sectors.

But if you’re invested in tech, there’s no need to worry… Voters have ensured that neither party has swept to power in Washington.

And that’s a sweet spot for tech… because as I explained above, it means taxes and regulations will stay low.

The best way to get exposure to the tech megatrend is to follow the research and recommendations of our in-house tech expert, Jeff Brown.

You can start out by following them, for free, in his daily e-letter, The Bleeding Edge. Jeff shared an insight today, for example, on the Pfizer vaccine news.

And if you’re looking for a one-click way to add tech stocks to your portfolio, consider buying shares in the Technology Select Sector SPDR Fund (XLK).

It will give you exposure to the biggest names in tech today.