Daily Cut regulars know what I’m talking about. On one side is the dollar, and the “power of the purse” it gives the U.S. government. On the other side is honest money like bitcoin and gold.

But now, there’s a new contender in the ring – corporate digital currencies like Facebook’s Libra. And as you know, the feds aren’t all too happy about it…

Our own tech expert, Jeff Brown, is a member of the Chamber of Digital Commerce. And he was in Washington, D.C., last week to speak with senators about what’s going on. Below, he reveals what all the hoopla is really about.

I just got back from Washington, D.C. And there was one topic everybody wanted to discuss…

This is indeed a national security issue. We will not allow digital-asset service providers to operate in the shadows.

He added that the Treasury Department has “very serious concerns that Libra could be misused by money launderers and terrorist financiers.”

Even President Trump made his feelings about Libra known: 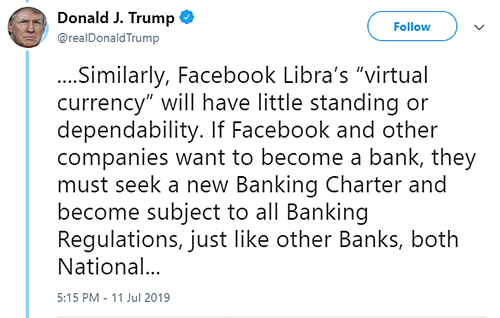 Why are high-profile policy makers taking aim at Libra? I think I know the answer…

And it has little to do with concerns over money laundering.

For readers who haven’t been following the story, some context might be helpful.

Facebook’s cryptocurrency, Libra, is a stablecoin. A stablecoin is a cryptocurrency that is pegged to an existing asset. In this case, Libra will be backed by a basket of international currencies.

Jeff held an investor seminar last night about new ways to profit in the tech market. Watch the replay.

Libra will be governed by the Libra Association – a group of 27 companies and Facebook. Facebook claims this will allow the currency to be governed in an open and transparent way… And that it won’t give one company too much influence over Libra.

Given that Libra will be a stablecoin, it will have low volatility. That will be attractive in countries without a stable currency, like Venezuela and Argentina.

Stablecoins are also attractive for use in daily purchases. After all, who wants to use a currency that might fluctuate 10% a day? It is very difficult to budget for daily necessities when there are high levels of volatility.

That means Libra could be used for small value payments and as a store of value in certain markets.

With Facebook’s global user base of 2.7 billion, it won’t take long for the coin to gain adoption.

So why, then, are government officials taking aim at Libra?

The usual line is that Libra would be used to finance terrorism or other illicit activity. This critique isn’t unique to Libra. Bitcoin’s critics have been saying this for years.

But let’s think about that rationally…

Bitcoin on the Dark Web

This year, $1 billion worth of bitcoins will be spent on the dark web for illicit purposes. That’s going by a report from blockchain analysis company Chainalysis.

The dark web is a hidden part of the internet that you can’t get to with normal web browsers. You need specific software to find it. And as you likely know, the dark web includes online markets for drugs and other illicit goods.

So, $1 billion in bitcoins will be spent on illicit goods this year. That will surpass the previous high of $872 million in 2017… which corresponded with bitcoin’s run up to $20,000 in price.

But guess what? $1 billion in a year is next to nothing in the big picture.

There’s a widespread perception that bitcoin is primarily used for illicit purposes. But nothing could be further from the truth.

For one, $30 billion worth of bitcoins trade on legal digital-asset exchanges every day. And remember, these exchanges verify the identities of all users.

Those transactions are in fiat currency… With U.S. dollars making up the biggest portion.

I suspect we would see a similar pattern with Facebook’s Libra.

So if the concern over Libra isn’t around money laundering, what is it?

I think I know…

Like I said, Facebook has a user base of 2.7 billion people. That’s roughly 35% of the global population.

With 2.7 billion people connected to its network, Libra would certainly gain immediate adoption. That would create a multibillion-dollar business for Facebook overnight, thanks to transaction fees.

But it would also accomplish something else.

Remember, Libra will be backed by a basket of currencies. It will be relatively stable.

It will also be completely fungible. In other words, users will be able to convert Libra into other digital assets like bitcoin… or convert assets back into U.S. dollars, yen, pounds, euros, and so forth.

Combine that with Facebook’s 2.7 billion-person user base, and Libra could become a global reserve currency practically overnight. It could rival currencies like the pound, the euro, and yes, even the U.S. dollar.

We have to appreciate the chutzpah Facebook demonstrated. It is launching a global central bank (Libra and its “association”) that it will control.

This will be a global reserve currency, effectively controlled by one corporation (or a group of corporations… let’s call it a cabal), that is more transferable, more fungible, more secure, and more divisible than any fiat currency on earth.

Do you see why the U.S. government might be a little wary of Facebook’s Libra? Cryptocurrencies like Libra could directly threaten the government’s “monopoly” on currency creation.

Some politicians are very open about this, too. Congressman Brad Sherman (D-CA) said this about cryptocurrencies in May:

An awful lot of our international power stems from the fact that the dollar is the standard unit of international finance and transactions… It is the announced purpose of the supporters of cryptocurrencies to take that power away from us.

I have bad news for any crypto skeptics like Congressman Sherman…

Digital assets are here to stay. There’s no putting this genie back in the bottle. The technology has already been released to the public. Some might say it has been unleashed…

And if America doesn’t want to get left behind, we need to embrace blockchain technology, not hide from it.

As part of my work with the Chamber of Digital Commerce, I’m speaking with policy makers to educate them about the benefits of blockchain technology across all industries and applications.

That’s why I was in D.C. last week. We were advocating for a light regulatory touch, so that innovation in blockchain technology can prosper in the U.S. and other stable democracies around the world.

The shift from fiat to digital is inevitable.

There will come a day when we walk into a store and see a sign: “We accept Bitcoin, Libra, or U.S. e-dollars.”

The currency revolution isn’t years away.

P.S. Before I go, I want to thank the thousands of readers who showed up for my Accelerated Profits Summit last night.

I pulled back the curtain on the world of early-stage tech… And I showed you how to get in on early-stage companies alongside the top venture capital firms. I even revealed my system for reaping triple-digit profits with these trades over and over again.

If you missed it, don’t worry. I arranged a special replay. As a Daily Cut reader, you can watch it right here.