Yesterday, the Fed jacked up interest rates for the third month in a row…

The central bank’s idea is to kill off the inflation it helped create by keeping rates too low for too long.

It’s part of what colleague Nomi Prins calls the Great Distortion – a permanent disconnect between the markets and the real economy.

She says this has trained investors to buy and sell based not on fundamentals like sales and earnings, but on Fed stimulus.

And the fear and uncertainty around what the Fed will do next have made markets highly volatile.

For most folks, that’s off-putting. They’d rather be out of the market. But for Nomi, it spells opportunity.

So today, we’ll look at a sector she believes is set to take off… and how you can use the current pullback to your advantage.

The opportunity on Nomi’s radar is in commodities…

That’s partly because they’re “hard assets.” They’re hard to make more of. That makes them great for beating inflation.

It’s also partly because commodities are vital for modern civilization. And in many cases, there’s not enough of them to go around. So prices have to rise.

But after surging in the first six months of the year, prices have dropped.

It’s all in this next chart of the Invesco DB Commodity Index Tracking Fund (DBC). This fund tracks 14 of the most heavily traded commodities – including gold, silver, oil, natural gas, aluminum, copper, zinc, wheat, corn, sugar, and soybeans.

But commodities investors need to look at the long-term picture…

And as Nomi has been showing her readers, the recent retreat in natural resource prices will be a blip in an otherwise long-term bullish trend.

One reason for this bullish view is global population growth. Over to Nomi…

There are nearly 8 billion people on Earth today. By 2050, there will be almost 10 billion, according to the U.N. That’ll create greater demand for homes, consumer goods, transport, and electricity. And it’ll increase demand for the raw materials that go into these things.

The spread of prosperity across the world – especially in China and India – is another tailwind for commodities. U.N. figures reveal that, by 2050, two out of three people will be living in cities or other urban centers. That’s at least 2.5 billion more than live there now.

That will require more copper, steel, and timber to build homes. And city dwelling is associated with richer diets. So over the next three decades, we’ll need to double the amount of crops we grow today.

But if the long-term bullish case is so strong, what’s caused the recent weakness?

A big headwind for commodities right now is a stronger dollar…

One way to measure dollar strength is the U.S. Dollar Index (DXY).

It looks at the exchange value of the dollar versus a basket of major trading partner currencies. 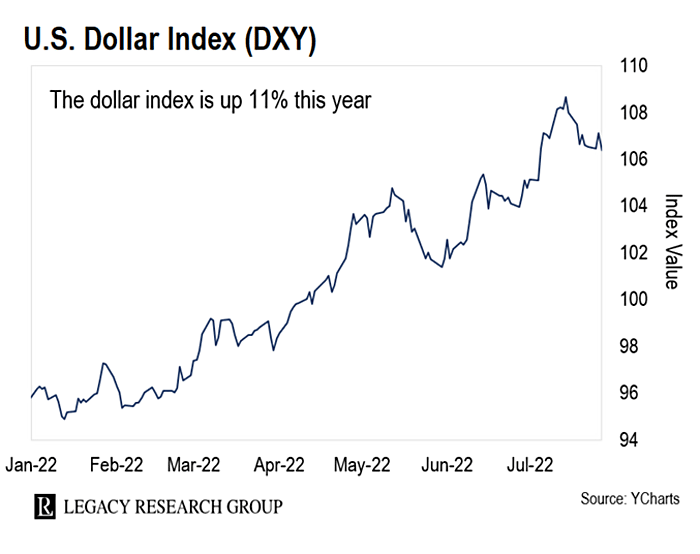 And much of that move is due to rising interest rates.

This draws in foreign investors looking for the best places to park their cash.

But it’s bad news for commodities, which are priced in dollars worldwide. Back to Nomi…

A strong U.S. dollar is typically bearish for commodities. There are two reasons for that.

Second, it increases debt-servicing costs for countries with dollar-denominated debt. That pressures the economies of emerging nations, thrusting many into a recession. This depresses global trade growth and puts another dent in global commodity demand.

That’s because the markets are the Fed’s ultimate master.

The Fed can continue hiking rates only so long before stocks fall another 10%… 20%… or even more.

If the Fed keeps hiking in the coming months, that could spook stock investors again. They’ll show their feelings by pushing stock prices down even future.

Then the Fed will react as it always does. It’ll bow to pressure and ease up on hikes. When that happens, as I believe it will later this year, commodities are set to rebound.

And sure enough, after hiking rates, Powell told reporters it would be appropriate to slow rate hikes in the coming months.

He also stressed that further interest rate changes would be “much more data-dependent” – meaning they’ll more heavily depend on the state of the economy.

And that’s when Nomi believes commodities will take off again.

You don’t need a special account to buy commodities…

You can pick up shares of DBC through your regular online broker.

This exchange-traded fund (“ETF”) will give you broad exposure to the surge in commodities Nomi sees coming.

For the reasons she outlined above, she’s particularly bullish on agricultural commodities such as wheat, corn, and soybeans.

It’s down 18% from its April high. Nomi says that makes for an excellent buying opportunity.

Just make sure to have a long-term view. And make sure DBC and VEGI are part of a diversified portfolio.