That’s when President Nixon took to the airwaves with an announcement so urgent it interrupted the popular cowboy show Bonanza.

Nixon told a stunned nation that the U.S. Treasury would no longer keep its promise to convert dollars to gold at a fixed rate.

The “Nixon shock” shattered the gold-backed system that had been in place since the Bretton Woods agreement of 1944.

And it ushered in the paper-money standard we’ve been on ever since.

Now, another shock is coming…

You see, the paper-money system we’ve been on for the last half-century is about to end.

This will usher in a new, purely digital cash system inspired by cryptocurrencies such as bitcoin.

Instead, the government will issue only digital tokens as cash.

And every transaction you make will be via an app on your smartphone.

It’s the biggest financial story of our time. It affects everything from the position of the U.S. dollar as the world’s reserve currency… to the crypto market… to even how we price gold and other commodities.

There are many different threads of this story. And we’ll return to them in future dispatches. Today, I (Chris) will show you where this shift will inflict the most damage.

It’s something I know many Daily Cut readers hold dear – your privacy.

Since the government lockdowns started, thousands of new readers are signing up to Legacy Research advisories each week.

That doesn’t surprise me.

With so much misinformation and hysteria in the mainstream press and on social media, they’re turning to a source of alternative ideas about how to make… and hang on to… wealth.

If you’re one of them, welcome aboard.

And one of the big ideas I’ve been making sure is front and center on your radar is the shift in money that’s underway. As I wrote in the September 11, 2019, dispatch…

Imagine a new type of cash. Unlike the kind you carry in your wallet, it exists only in digital form.

There’s no more need for ATMs. Tip jars are a thing of the past. Even vending machines are digital. Every time you spend money, it’s through a digital app. And it’s recorded in a government database.

The feds collect and store details on every transaction you make. They also know exactly where you are in the world every time you buy something.

That may have seemed a little “out there” back then. But news just broke that China – the world’s second-largest economy – has started to roll out exactly this kind of system.

The regular Chinese currency is the renminbi, which is abbreviated as RMB.

The e-RMB is a crypto-inspired version of the renminbi that the Chinese central bank, the People’s Bank of China, will roll out.

It will use a version of blockchain – the cryptographically secured digital ledger technology that underpins bitcoin. It will also involve a digital wallet app on phones to send and receive e-RMB. 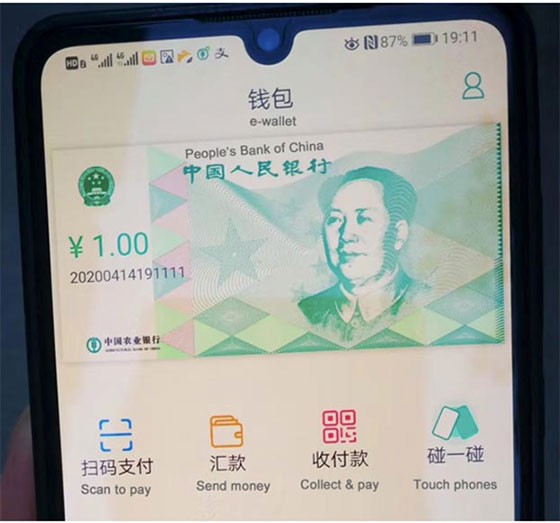 And it will completely replace the physical banknotes the government issues.

China Daily is a Chinese state media outlet… meaning it’s an official mouthpiece of the Chinese Communist Party. And it reports that the government has already begun trials of the e-RMB in several cities, including Shenzhen, Suzhou, and Chengdu.

China Daily also reports that the government will start paying government employees and civil servants using this new digital cash starting in May.

This is a disaster if you value your privacy…

China is the first large state to roll out a digital currency system like this. But it won’t be the last…

All major currencies – including the U.S. dollar – will operate in the same way down the line.

And it will be a hammer blow to your privacy. Because it will give the feds even more control over you and your money.

Unfortunately, governments have a tendency to think wealth doesn’t really belong to their citizens. They see it as belonging to themselves instead.

With these new currencies, each transaction made in the economy will leave a digital record the government will be able to see. This is why fiat money is headed to a blockchain. Governments like to look at where all the money is. A blockchain they control is a way for them to do that.

And our tech expert here at Legacy, Jeff Brown, agrees…

China is testing out its central bank digital currency (CBDC). We can think of a CBDC as being similar to a cryptocurrency like bitcoin, with one major difference. Unlike bitcoin, a CBDC would not be a decentralized, transparent technology architecture. It would be under the strict control of the Chinese government.

Once all money becomes digital… people will get used to transacting with wallets on their smartphones rather than physical wallets in their pockets.

Then the choice between private cryptocurrencies and the government variety will be clear. Teeka again…

Bitcoin, for instance, has a hard cap of 21 million coins. There will never be any more than that. You won’t have that guarantee with crypto-fiat currencies. There will still be central banks that can fiddle with interest rates and balloon the money supply, causing inflation.

Bitcoin is more private than these government versions of crypto. So it’s going to be an increasingly popular alternative to government money.

And as that popularity grows, so will bitcoin’s value…

Don’t have a position in bitcoin yet?

Also, check out this presentation from Jeff.

He’s identified a number of tech stocks that will benefit from this shift from digital to paper money. To learn more about these stocks… and get a chance to receive Jeff’s in-depth research on digital assets… go here.