Watch this “line in the sand” for gold… The Fed’s gift to gold buyers… Last chance to hear from Jeff Clark on how to double your money in a bear market… In the mailbag: “There is NO WAY Americans can even warm to the idea of socialism”…

That’s the message of the following chart.

It tracks the price of an ounce of gold relative to a key trend line called the 200-day moving average (200-DMA). 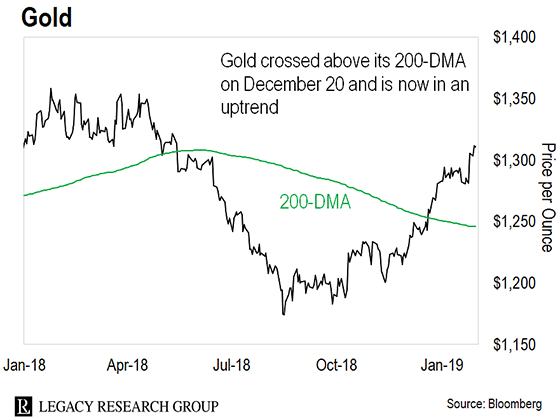 Don’t be put off by the jargon.

The 200-DMA tracks the average price of the last 200 trading days. And it’s often considered to mark a “line in the sand” between a bull and a bear trend.

Put simply, if the price of gold is above its 200-DMA, it’s in a bullish uptrend. It’s in a bearish downtrend if it’s below its 200-DMA.

As you can see, gold languished below its 200-DMA last May.

But it crossed back above this indicator in December. And that signals higher prices ahead.

This won’t come as a surprise to regular readers.

We’ve been pounding the table on why gold is gearing up for a new bull market going back to the August 27 Cut… just seven days after the gold price bottomed.

Plus, mom-and-pop investors – aka the “dumb money” – hadn’t been so bearish on gold in more than 35 years. And as master trader Jeff Clark put it at the time, that was a screaming contrarian buy signal…

And there are three other reasons why the case for gold has gotten even stronger since then.

First up is the Fed’s about-face on interest rates…

Between the start of August and the end of last year, the Fed raised key lending rates twice.

But the near 20% peak-to-trough plunge in the S&P 500 last year was a powerful reminder that the bull market in stocks is on shaky ground. And not wishing to upset the applecart any further, Powell backed off on further tightening.

As he put it today after this week’s policy meeting, the Fed “will be patient as it determines what future adjustments to the target range” are appropriate.

Why does that matter for gold?

The reverse is also true. The lower interest rates are… the more attractive gold is relative to income-paying alternatives.

Since the peak in 2012, annual capital spending by miners is down by about two-thirds.

That’s the money miners spend on new equipment and mines. You can see the sharp drop in the chart below. 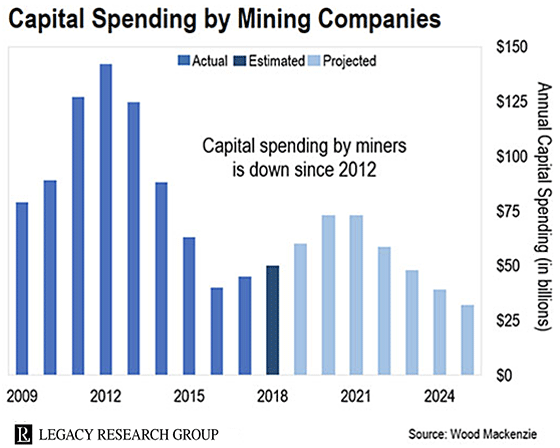 Due to lower prices, miners have had to tighten their budgets. And in tough times, one of the first budget items to go is exploration. After all, if gold isn’t profitable, why look for it?

It hasn’t just been gold miners cutting back, either. Metals miners across the board have done so as well.

Capital spending is projected to be less than half of what it was at its peak in 2012. And smaller exploration budgets mean miners are finding fewer new deposits. On top of that, the new deposits aren’t as good as old ones.

Demand for gold has held steady – despite the mom-and-pop investors we mentioned earlier yanking their money out of gold-backed exchange-traded funds (ETFs).

The World Gold Council is the leading market development organization for the gold industry. And it tracks global demand on a quarterly basis.

Its most recent figures (for the third quarter last year) reveal that gold demand was up by about 1% over the previous year.

That’s all good news for gold investors. But it leaves out the third, and most important, reason why you want to own gold.

Gold is the best way to “disaster proof” your wealth…

The real reason you own gold isn’t to speculate on rising gold prices. (That’s what gold stocks are for.)

You own gold because its track record of protecting wealth against disaster goes back thousands of years.

There is a time for everything under heaven. A time to believe. And a time to restrain from embracing crackpot ideas. In short, we believe we have entered an Era of Busted Dreams. Gold is a hedge against all of them.

A good rule of thumb is to have at least 10% of your wealth in gold as a hedge against disaster.

Not sure about the best way to get your hands on gold?

Check out The Gold Book…

It’s 48 pages filled with everything you need to get started as a gold investor – including a four-step checklist for buying the right coins… flexible storage options… and what to look for in a gold stock.

As we’ve been telling you, master trader Jeff Clark believes the bears are now in charge on Wall Street.

But unlike most long-term investors, Jeff’s actually looking forward to the coming bear market. That’s because, as a short-term trader, he benefits from big swings in stocks that are typical of bear markets.

If Jeff is right, we could get the worst market crash since 2008 this year. But if you see it coming, you could double your money over 10 different times – without touching a single stock.

To learn more, check out Jeff’s special presentation on profiting in the next bear market. It goes offline at midnight. So watch it here before it’s gone.

In the mailbag: “There is NO WAY Americans can even warm to the idea of socialism”…

I still love Margaret Thatcher’s comment that “the trouble with socialism is that eventually you run out of other people’s money to spend.” Let all the socialists move to Venezuela for the next four or five years. My guess is they would come back with a changed attitude.

YOU, sir, are full of hot air! There is NO WAY Americans can possibly even warm to the idea of socialism and our government should not even allow it! EVERY PLACE it’s been tried it’s been an abject failure! Everywhere! Those that do are simply enticed by the “free stuff” they are promising. All that comes at a price for SOMEONE!

Any form of socialism that’s tried will be met with great resistance, even civil war! So, amend your article and let us STOP speaking of socialism!

That woman is a nut! The rich pay enough in taxes, as we all do. And, no, I’m afraid I don’t believe in socialism. I see how well it’s working in other countries.

Could socialism ever come to America? Or would it be met with civil war, as Mike R. says? Write us at [email protected].