Your wealth is under assault…

Thanks to supply chain issues… changes in our spending habits due to the pandemic… and government stimulus… inflation is now up 8.5% annually.

That’s the highest level since Ronald Reagan was in the White House in the 1980s.

Spiraling inflation is bad news for your wealth for two reasons.

First, your living costs are going up. So you have to spend more of what you earn on your day-to-day needs.

Second, you have to make at least 8.5% a year on your investments just to stay put. Anything less, and you lose buying power.

Building wealth under these conditions can be daunting. And from talking with your fellow readers at the Legacy Investment Summit in Washington, D.C., earlier this month, I (Chris Lowe) know it’s at the top of your minds right now.

So today, I’ll share an inflation “cheat sheet” with you. It’s a simple way to grow your wealth as the values of fiat currencies slide.

Wealthy folks have been using this cheat sheet for centuries…

Have you noticed that “one percenters” tend to own a lot of property and land?

And have you noticed they tend to take out loans to buy their real estate?

That’s because when you take out a long-term loan in a currency such as the dollar, you’re “shorting” – or betting against – that currency.

You’re getting an amount up front and promising to pay it back over time.

If there’s inflation over the term of the loan, you’ll pay back that loan in money that’s worth less than when you borrowed it.

You’ll have to pay interest on the loan… But as long as the inflation rate outpaces the interest rate, you’ll come out on top.

And the more your currency inflates, the better off you’ll be.

It has the world’s highest annual inflation rate right now – 467%.

That’s an epic wealth wipeout for cash savers. But this same rate is great for Venezuelans who have mortgages denominated in bolívars.

They’re paying back the same amount of bolívars they agreed to pay at the outset.

But in real – or inflation-adjusted – terms, their repayments are vastly cheaper versus a year ago.

Even better, they end up owning a “hard asset.”

They have intrinsic value. And they’re hard to produce more of relative to their existing supplies.

These traits make them great to hold during inflationary periods like the one we’re living though today.

Real estate has these traits.

You can live in a house. Or you can rent it out and earn income. This gives it intrinsic worth.

So borrowing in a fiat currency and converting what you’ve borrowed to real estate is a twofer. You’re shorting the inflating fiat currency. And you’re getting exposure to an inflation-resistant asset.

But you don’t have to buy expensive real estate to own a hard asset. You can also buy bitcoin…

First off, it has intrinsic worth.

And just like payments networks Visa (V) and MasterCard (MA) have value, so does the bitcoin payment network. But it’s more secure… has a wider reach… and doesn’t involve expensive middlemen to process transactions.

To “mine” new bitcoins, you need expensive computer rigs and electricity to run them.

And thanks to a hard cap built into the bitcoin code, there will be only 21 million bitcoins ever.

That’s why Michael Saylor’s bitcoin strategy is so ingenious…

He’s the CEO of MicroStrategy (MSTR). It’s the Nasdaq-listed business intelligence firm he founded in 1989.

And in 2020, he directed his company to start buying bitcoin.

He partly used the company’s cash reserves to buy them. But he’s also been using the borrowing strategy I described above.

In other words, Saylor has shorted the dollar… and ended up with a hard asset on his company’s balance sheet.

I know what you may be thinking…

“But Chris, what about bitcoin’s famous volatility? Isn’t bitcoin down a bunch from its high last year, even though inflation has been surging?”

That’s a 38% loss in a time of rising inflation.

But when you zoom out and look at the longer-term trend, you’ll see that owning bitcoin has kept you way ahead of inflation. The chart below is of bitcoin’s annual returns over the past decade… 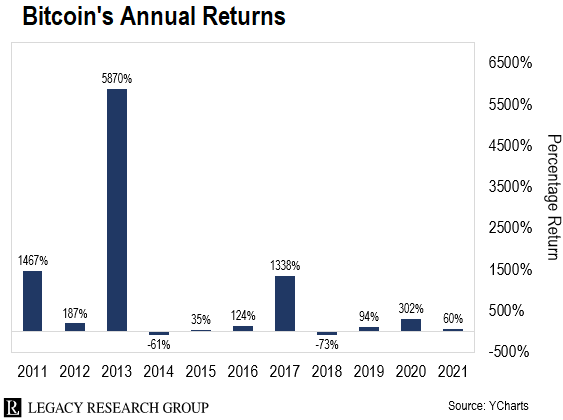 If you’d held on to bitcoin throughout that time, you’d be sitting on a cumulative return of 137,887%.

That’s more than enough to outpace the decade’s average annual inflation rate of 1.8%.

So how can you use this cheat sheet to beat inflation?

It makes a lot of sense to take out a long-term mortgage on a piece of real estate.

So long as the average annual pace of inflation over the next 30 years is higher than that, you’ll come out ahead. And you’ll have the hard asset of real estate.

An even simpler move is to take some of your dollar savings and convert it to bitcoin.

It’s one of the easiest hard assets to buy. All you have to do is go to an online exchange such as Coinbase.com (COIN), open an account, and start buying.

Just remember that our cryptocurrency investing expert, Teeka Tiwari, recommends you hold no more 10% of your portfolio in bitcoin.

And keep a long-term perspective. Bitcoin’s price will bounce around a lot over the short term. But over the long term, it’ll keep you well ahead of inflation.

But first, you need to hear an important warning from Teeka…

As he’s been showing his readers, an event is coming that will shock the crypto ecosystem. He says it’ll trigger a historic “crypto panic.”

It’s set to become the biggest crypto event of the decade… And it’s guaranteed to happen.

That’s why Teeka is holding a special briefing tonight at 8 p.m. ET to help you prepare.

There, he’ll share his playbook for taking advantage of the coming panic… giving you a chance to secure more than a lifetime of wealth when it hits.

He’ll even give you the name of one of his top cryptos to play this panic.

So go here to reserve your free spot at Teeka’s big event tonight at 8 p.m. ET.