Last Friday, Teeka told his readers to “scoop some cream”…

“Scooping some cream off the top” is his term for taking some profits on a winning recommendation.

In this case, it was a crypto called Terra (LUNA).

Teeka and his chief analyst, Greg Wilson, added it to the model portfolio at our Palm Beach Crypto Income advisory on March 16, 2020.

And, boy, did they hit it out of the park…

When they added LUNA to the model portfolio, it was worth a little over 13 cents. At this writing, it’s worth $86.70.

That’s a potentially life-changing gain of 64,748% in just two years.

So kudos if you acted on Teeka and Greg’s recommendation. And don’t worry if you missed out…

But you don’t need to be a crypto expert to profit. Today, I’ll show you why you can still make outsized gains in the granddaddy of crypto, bitcoin (BTC).

First, a deeper dive into Teeka and Greg’s Hall of Fame Terra trade. As you’ll see, it’s on the bleeding edge of one of the biggest crypto trends on their radar – DeFi (decentralized finance).

Stablecoins are cryptocurrencies pegged to the value of a government-issued currency such as the U.S. dollar, the euro, or the yen.

That’s important for payments because it cuts out the exchange-rate volatility other cryptos are famous for.

If I buy something from you in a cryptocurrency that’s bouncing around in value versus the dollar, it might shoot up in value… and I’d lose out on those gains.

Or you may accept it as payment before it plunges versus the dollar… wiping out your profits.

Using a stablecoin instead cuts out that uncertainty and risk.

That’s where TerraUSD (UST) comes in…

It’s a stablecoin on the Terra blockchain with a fixed value relative to the U.S. dollar. So one UST is worth one U.S. dollar.

And unlike other popular stablecoins backed by dollars in a bank account somewhere, it maintains this peg algorithmically.

When UST goes too high versus the dollar, Terra creates new UST tokens. This increase in supply lowers its price.

And when UST goes too low versus the dollar, Terra removes UST tokens from circulation. This fall in supply raises its price.

Why go to all the trouble of creating a crypto that’s tied to the value of the dollar? Why not just use the dollar itself?

Stablecoins like UST allow you to store your wealth in a wallet app on your phone that only you have access to. You don’t need a bank.

Anyone with an internet connection and a smartphone can send and receive the coins.

The typical credit card company charges a processing fee of 1.3% to 3.5%. The payment processor also gets a cut, which varies depending on the processor.

That’s why CHAI, a South Korean payment platform similar to PayPal (PYPL), uses UST instead. The fees are no more than 1%.

And that’s not Terra’s only use case.

Other developers can use the Terra blockchain to build DeFi apps.

One of these is Anchor Protocol. It’s a borrowing and lending app built on Terra that offers a yield of 19.5% on UST accounts.

That puts Terra at the center of one of Teeka’s biggest investment ideas for 2022 – the growth of DeFi.

As he put it at the start of the year…

DeFi will do for finance what the internet has done for so many other businesses – replace a high-cost middleman with a low-cost one. Eventually, it will make banking, borrowing, lending, and investing more accessible and cheaper for billions of people.

The result will be an entirely new global financial system run for the people and by the people… that operates completely transparently.

That’s why he and Greg recommended LUNA. It’s the crypto Terra issues to allow you to profit as more people use the network.

If you’re new to crypto, that’s a lot to take in…

But like I said up top, you don’t need to get deep in the weeds on “altcoins” (cryptos other than bitcoin) such as LUNA to profit from the crypto revolution.

You can simply buy the world’s most popular cryptocurrency, bitcoin (BTC).

That was Teeka’s top recommendation at the third annual Legacy Investment Summit.

In front of about 350 of your fellow Legacy readers at the Mandarin Oriental hotel in Washington, D.C., two weeks ago, he pounded the table on why bitcoin would hit $500,000 by 2025.

If you were there in D.C., or if you caught Teeka’s talk through our livestream pass, you’ll know it covered a lot of ground.

But there was one key takeaway: Bitcoin’s price will soar as it goes from the fringes to the mainstream.

In particular, Teeka has his eye on Wall Street adoption…

It’s something he’s been spreading the word about for years.

As he’s been showing his readers, Wall Street runs on greed. And major Wall Street players see bitcoin as the next big source of profits.

As Teeka put it at the Summit…

That’s why, over the past couple of months alone, we’ve seen some of the biggest finance names announce plans to get into bitcoin and other cryptos.

And the more Wall Street gets behind bitcoin, the more these firms’ clients will own the crypto.

Bitcoin’s supply, as we’ve covered many times in these pages, tapers off over time until it reaches a hard cap of 21 million bitcoins.

And this steady restriction of supply is baked into bitcoin’s code. No person, corporation, or government can change it.

As the scarce crypto continues to go from the fringes to the mainstream, and more people own it, its price must go up. That’s just how markets work.

The table below shows where bitcoin’s price would be if between 1% and 5% of Wall Street capital moved out of stocks and into bitcoin. 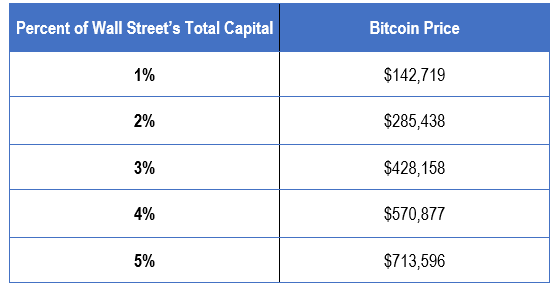 These are highly conservative estimates. That’s because as bitcoin’s price rises, this draws in even more investors… and even more capital.

Even better, you don’t have to be crypto savvy to buy in…

You can simply head to Coinbase.com, open an account, and swap some dollars for bitcoin.

You don’t have to buy a whole bitcoin. You can choose what dollar amount you want to invest and click “buy.” So you can own a fraction of a bitcoin.

Also remember that it won’t be a straight shot higher. There’ll be plenty of volatility along the way.

And if you want to learn more about crypto investing…

Teeka has an opportunity for you next week.

He’s been warning about an upcoming event that could define crypto for the next decade. In fact, he says it’ll trigger a “crypto panic” like we’ve never seen before.

But he doesn’t see this as reason to run for the exits. Instead, he views it as a chance for you to secure generational wealth… if you follow his playbook.

In a presentation on Wednesday, April 20, at 8 p.m. ET, Teeka will explain more about this event and the coming crypto panic.

He’ll also give away the name of one of his top cryptos to play this panic. In the past, his free picks have averaged a peak gain of 1,500%. So you don’t want to miss this.

You can sign up to secure your spot at his presentation here.