The chip wars are heating up…

The U.S. and China are in a race to become technology superpowers.

Each side believes this will give them an edge should the two countries go to war.

And that’s looking more likely since Chinese leader Xi Jinping just tore up the rule book and appointed himself leader for life.

Xi made it clear last month at the Chinese Communist Party’s (CCP’s) 20th National Congress that he sees “reunifying” China and Taiwan as a key goal for his regime.

That’s CCP speak for an invasion by Chinese troops of the democratically ruled island nation.

His administration cut off Chinese tech firm Huawei from advanced chips. It also pressed the Dutch government to bar the sale of extreme ultraviolet (EUV) lithography machines to Chinese companies.

Chipmakers need these machines to etch the finest details on advanced semiconductors. And Dutch company ASML (which stands for Advanced Semiconductor Materials Lithography) is the only one in the world that makes these machines.

And President Biden has continued the pressure on China.

This includes a block on sales of the advanced EUV machines.

And this last detail has one reader of our tech expert, Jeff Brown, thinking about ways ASML could get around the ban…

Reader question: Why doesn’t ASML sell their EUV lithography machines to China and simply replace all U.S. components with those made by other countries?

Jeff’s response: Hi, John. Thanks for your question. I recently discussed the new export controls on chipmaking equipment to China.

The new rule is titled “Implementation of Additional Export Controls.” And it outlines aggressive new controls regarding the exports of semiconductor technology.

This is an economic war with China. The new rule will stimy China’s ability to make bleeding-edge semiconductors.

Could ASML get around this control by swapping out U.S.-made components in their machines?

That’s a logical thought. But the U.S. has banned ASML from selling any kind of EUV machines to China. It doesn’t matter whether they include U.S.-made components.

And yes, the U.S. does have that power, despite ASML being a Dutch company.

But let’s say just for argument that U.S. components could be swapped out.

As most of my readers know, before coming on board as an analyst at Legacy Research, I was an executive at NXP Semiconductors Japan. It supplies chips to carmakers as well as other users.

The supply chains around building a car or truck are highly complex. It takes years of designing, planning, and securing the necessary components to make a modern vehicle. With few exceptions, it would have been unthinkable to swap out components at the last minute.

It’s a similar story with ASML’s lithography machines. These are the most advanced chipmaking tools on the planet. A machine this complex can’t easily swap out components either. Many are custom designed for ASML. 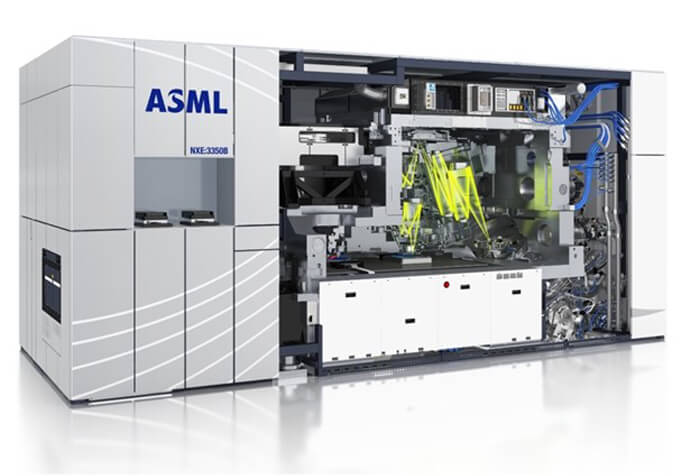 It would take years to make the adjustments to rid ASML equipment of U.S.-made components. And even if that were possible, ASML still couldn’t sell EUV technology to China.

China would like to buy these machines directly from ASML. That would give it the ability to make semiconductors on par with what U.S. chipmakers Qualcomm, NVIDIA, and AMD are producing.

But China still has access to ASML’s machines through other channels.

Most semiconductor companies use either TSMC in Taiwan or Samsung to make their semiconductors. And TSMC and Samsung make these chips using ASML’s EUV machines.

This is one of the reasons why I think the policy is misguided. There will always be secondary markets and intermediaries. China even has ways to procure components to make advanced semiconductors.

All these policies will do is damage U.S.-based technology companies and antagonize the Chinese government at a time of intense global crisis.

They will also increase the likelihood that China will assert control over Taiwan, and the Taiwanese semiconductor industry, which would be devastating for the U.S. and Europe.

Next, reader Mark K. wants to know if the U.S. economy could be on the verge of not only a recession, but a deep depression.

And standing by with an answer is colleague Nomi Prins. As regular readers will know, Nomi is a former investment banker who became an investigative journalist after quitting her seven-figure job at Goldman Sachs.

She now heads up The Distortion Report. She’s on a mission there to show her readers how to profit from the distorted markets central banks and governments have created by overstimulating the economy with gobs of digitally “printed” cash…

Reader question: How likely are we to get not just a deep recession but a real depression out of what’s happening today?

The indicators seem numerous that we are in deeper trouble than the pundits and the Fed are letting on.

Nomi’s response: Thanks for writing in, Mark. This is a hugely important question right now.

A rule of thumb for a recession is when a country sees negative GDP growth for two quarters in a row.

Well, we just got new GDP numbers yesterday for the third quarter. And we got news that growth came in at 2.6% for the quarter.

This is good news. Especially coming after two back-to-back quarters of negative GDP growth (-1.6% in Q1 and -0.6% in Q2). Plus, it slightly exceeded the analysts’ expectations.

So, by that measure, we’ve pulled out of a recession. But we’re not fully out of the woods just yet.

If you look past the headline GDP number, growth rates are undeniably slowing.

Consumer spending, the bedrock of the U.S. economy, inched up 0.4% in the third quarter. But that was down from a 0.5% increase in previous quarter.

Gross private domestic investment – a component of GDP that tracks equipment purchases by firms and changes in business inventories – fell 8.5%. That was after tumbling 14.1% in the second quarter.

And residential investment, a gauge of homebuilding activity, plunged 26.4%. That was after falling 17.8% in Q2. This reflects a sharp slowdown in the real estate market.

So, why was the headline GDP number positive in the third quarter?

In a word, trade. International trade accounted for the bulk of the rebound in U.S. economic growth. As U.S. retailers imported fewer goods, the biggest contribution to growth in Q3 came from a shrinking of the trade deficit.

The problem is that this is a one-off. Most economists agree it likely won’t repeat in future quarters.

This paints a rather bleak picture of the U.S. economy. So, you are right about that.

That said, I remain optimistic that whatever economic troubles we face going forward will be short-lived and relatively shallow.

This is down to the Fed and its policy of raising interest rates to try to dampen inflation.

The Fed’s unofficial mandate is to keep stocks from tanking too much. And despite what it says in public, it knows it will thrust the economy into a severe and prolonged downturn if it keeps hiking too much. And this would have a huge negative impact on stocks.

I’ve been saying for months that the Fed will have to begin to pivot toward less aggressive rate hikes before the year is out.

But after signaling the initial stages of its pivot to the media (and, by extension, to the big banks and the market), it’s only a matter of time before the Fed changes tactics and walks back its hawkish stance.

As I’ve been writing to you about in these pages, REITS trade like stocks on a public stock exchange. But they have a specific business model.

They finance, own, and operate income-producing real estate. And by law they must pay out at least 90% of their rental income to their shareholders.

This makes them a great source of income for investors.

And as Brad talked about in these pages, he used REITs and other income-producing stocks to make back millions after he lost everything as a real estate developer in the 2008 crash.

And Brad answers readers’ questions about REITs and other income plays at his Intelligent Income Daily e-letter. (Sign up for that here.)

Here’s one that came in for him recently…

Reader question: You’ve talked about REIT cash dividend payouts and referred to the figures of 40-50% as strong and favorable. I thought REITs had to pay out 90%. Are you referring to a different calculation?

Brad’s response: Thanks for writing in, Samuel.

When it comes to REITs, keep in mind that the 90% rule is a law. To qualify as a REIT, a company must pay out at least 90% of its taxable income to its shareholders any given year. Most REITs pay out close to 100% of their taxable income.

You may be confusing that with the payout ratio. It’s a company’s dividend payout divided by its earnings. In REIT terminology, we call earnings “funds from operations” (FFO).

Let’s say a REIT is generating $1 per share in quarterly FFO, and its dividend is $0.50 per share. That’s a payout ratio of 50%. That provides a safe cushion, or margin of safety, regarding the dividend.

So, the difference is that 90% is referencing taxable income. The payout is referring to funds from operations or a REIT’s “earnings.”

That’s all for this week…

If you have a question for the team, send it to [email protected].

I’ll do my best to get a response from our analyts and publish it in a future Friday dispatch.

Have a great weekend…