Biotech stocks are bouncing after a brutal “winter”…

The chart below is of one of the big biotech stock exchange-traded funds (ETFs), the iShares Biotechnology ETF (IBB).

But since its peak at the end of August last year to its low earlier this month, it’s plunged 40%.

Our tech expert, Jeff Brown, has been calling it “Biotech Winter.”

But the chart above strongly suggests that winter is ending, and a “Biotech Spring” is on its way.

Plus, new biotech therapies are curing diseases and saving lives.

In short, it’s a great time to add some biotech stocks to your portfolio… ahead of the next bull run.

IBB’s chart will have traders salivating…

Let’s zoom in on the last three months. You can see it formed a “triple bottom” that began in May. 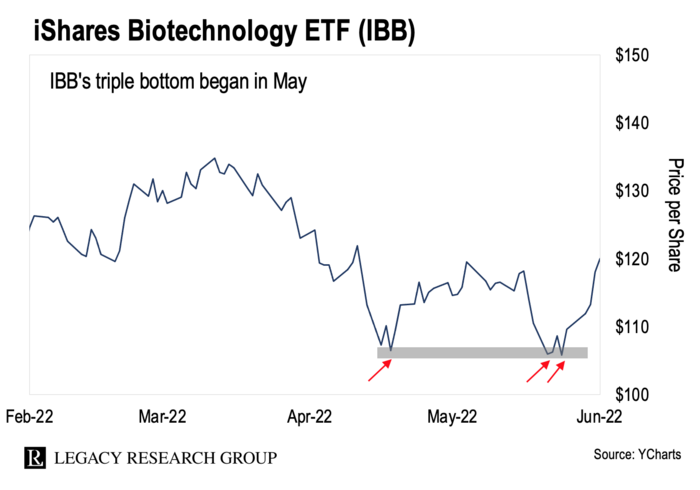 This shows strong a strong level of what traders call “support” for IBB at about $106 a share.

At that price, buyers are willing to step in and push back against further selling pressure.

That doesn’t mean IBB can’t go lower. This pattern may not hold.

But nothing is certain in investing. It’s about putting probability on your side. And this chart strongly suggests that the bearish trend that’s been playing out over the last 10 months is reversing.

Investor sentiment is so low that earlier this month, more than 25% of small biotech companies had market valuations less than the amount of cash on their books.

That’s the highest percentage of biotech stocks trading below their cash levels in 15 years.

At the same time, breakthrough biotech therapies are coming out fast.

Jeff is focused on companies at the forefront of CRISPR gene-editing technology.

At a high level, it works like the “cut” and “paste” functions on a computer.

Doctors cut out faulty DNA from our genome (our complete set of DNA) and paste healthy DNA in its place.

CRISPR is the key to treating the roughly 6,000 genetic diseases doctors have identified so far.

The results have been breathtaking…

It targets the mutation that causes spinal muscular atrophy (SMA) in babies.

That’s a genetic disease that causes progressive and irreversible loss of motor function. This usually leads to death… or the need for permanent ventilation by the age of two.

But with one spinal injection of Zolgensma before they turn two… children can avoid this fate.

One study of 29 babies with SMA revealed that, after this treatment, all were able to breathe and eat on their own. Most were sitting, standing, and walking without help.

And just last week, we got news of more stunning CRISPR trial results…

Left unchecked, sickle cell anemia causes severe pain, organ damage, even strokes. Half of all Americans with the disease die before their 47th birthday.

Beta-thalassemia stops red blood cells from carrying oxygen through the body. This leads to fatigue, weakness, even facial-bone deformities. Sufferers typically need a transfusion every every two to four weeks.

But the new trial results show that the CRISPR-based therapy can treat these diseases.

All 31 initial patients in the sickle-cell trial have been free from severe pain since their treatment.

And 42 of the 44 beta-thalassemia patients haven’t needed any more blood transfusions.

These are jaw-dropping results…

It’s extremely rare to see results this good in a clinical trial. They’re down to the power of this biotechnology.

Here’s how Jeff put it at our Early Stage Trader advisory. It’s where he recommends the world’s best biotech stocks. Jeff…

All 75 patients in these two trials have improved. Most have experienced a functional cure. Talk about remarkable results.

And keep in mind, these astounding results were from one-shot treatments. Clinicians take cells out of the patient’s body… edit them in a lab using CRISPR… then inject them back into the patient. They haven’t needed any extra treatment.

Thanks to these results, the Food and Drug Administration (FDA) is poised to approve this CRISPR-based therapy.

That would be a first. It would also be pivotal for the biotech industry. Back to Jeff…

CRISPR has been around for almost a decade. But despite that… and despite winning a Nobel Prize two years ago… many people in the scientific and medical communities still doubt its potential.

Many of them – including Big Pharma executives – say it’s still unproven technology with a lot of risks. But here we are with another validation of CRISPR technology.

This sector has been beaten up badly. Investor sentiment has been horrible. But we’re seeing a turnaround. And that’s when you want to buy.

If you already own biotech stocks, keep the faith. Just like with crypto, when there are life-changing gains on offer… there’s often stomach-churning volatility to endure.

And if you’re a newer reader who has yet to invest in biotech breakthroughs, consider picking up some shares in IBB.

In includes, small-, medium-, and large-cap biotech stocks. This gives you broad exposure to the sector… and the rebound on the way.