It’s part of an historic shift in our energy supply – away from fossil fuels toward fuels that don’t release greenhouse gases.

And for folks who are positioned to profit, the gains could be life-changing.

For instance, uranium stocks have shot up nearly 100% over the past 12 months…

And the best is yet to come.

Find all the details in your Weekly Pulse video at the top of the page.

It’s where I (Chris Lowe) and host Tom Beal break down the most important market story on our radar for the week.

P.S. If you prefer to read along, we’ve included a transcript of our conversation below.

Tom Beal: To say Big Oil had a terrible week last week would be a huge understatement. What does that mean for your wealth growth and protection?

My name is Tom Beal, host of The Weekly Pulse, where we break down the biggest wealth-growth story of the week.

I’m here today with the editor of Legacy Inner Circle, Chris Lowe. Chris, where do we kick off this conversation?

Chris Lowe: Hey, Tom. So the big news this week – well, it really happened last week, but the ramifications are spilling over into this week – was what people are calling Black Wednesday for Big Oil.

Basically, last Wednesday, in a historic 24-hour period, courts in the Netherlands forced Shell, the big oil major, to cut its production in line with the Paris Climate Agreement. And then, in the U.S., ExxonMobil and Chevron shareholders imposed emission targets.

And then, there was a boardroom overhaul at Exxon, essentially doing the same thing.

Today, I thought we’d look at a sector that our analysts think is going to profit from the demise, essentially, of Big Oil over time. And that is uranium.

Tom: Today’s episode is brought to you by Legacy Inner Circle. That’s where Chris Lowe gets the unique insight into the model portfolios of all the experts within Legacy Research Group to help you grow and protect your wealth.

There’s a super special offer for you as a Weekly Pulse viewer. Just click the link below, go learn more about what Legacy Inner Circle is, and take advantage of all that’s included for less than the cost of a venti at Starbucks.

Click the link. Go learn more. Join us inside the members’ area in the iOS and Android members’ only app.

Now, back to this week’s episode.

Wow. So that’s why each week, it’s always interesting because there are so many things happening. Literally, the whole oil industry has been shaken up.

How is that going to impact us, the world? And how can we, with our focus on growing and protecting our wealth, move accordingly to do exactly that – grow our wealth and protect it at the same time?

I’m interested to hear how and what you feel are some next steps that the viewers can take. I’ll be listening closely.

Chris: I think the big picture here, and it’s something Dave Forest at Casey Research has been talking about a lot – he’s our commodities expert. He’s actually a geologist himself. He goes out and looks for deposits of copper and other metals.

Dave has been pointing out that we’re going through a fourth big energy transition. These are epochal-type moves, Tom. It goes back as far as the cave man and fire. When we, as humans, got fire, we were able to eat meat. We were able to evolve. We got more calories and so on. So it was a big change in human civilization.

Then, we basically transitioned into animal power and agriculture. We had ox and horses. And that established ancient civilizations.

Then, we moved into the industrial era that we’re in now. And that’s based around fossil fuels.

And now, what’s happening is that those fossil fuels are causing the atmosphere to warm up. And whether you believe it or not, whatever your own political views around that are, Tom, there’s a shift happening towards this new, renewable or non-carbon-releasing forms of fuel.

But there’s another angle. And that is nuclear energy and uranium and the role that plays in this energy shift.

Tom: My head’s spinning with all of this stuff. Like you said, a lot of it is the precious metals and things of that nature. But now, we’re talking uranium.

So, where and how can we take some actions to begin researching? How can we grow and protect our wealth following that path of uranium?

Chris: I won’t get too deep into the weeds in this short video. But basically, uranium is the number one clean energy fuel in the U.S. And the U.S. wants to cut its greenhouse gas emissions in half by 2030.

It just can’t use solar and wind power to meet those goals. So uranium is going to play a big part in that shift.

The big idea is that there is this energy shift happening. These things happen over time, and we’re in the middle of one now. We’re moving from this fossil fuel-based system to a new system built around batteries – that’s where lithium and the tech metals come in – but also built around uranium. 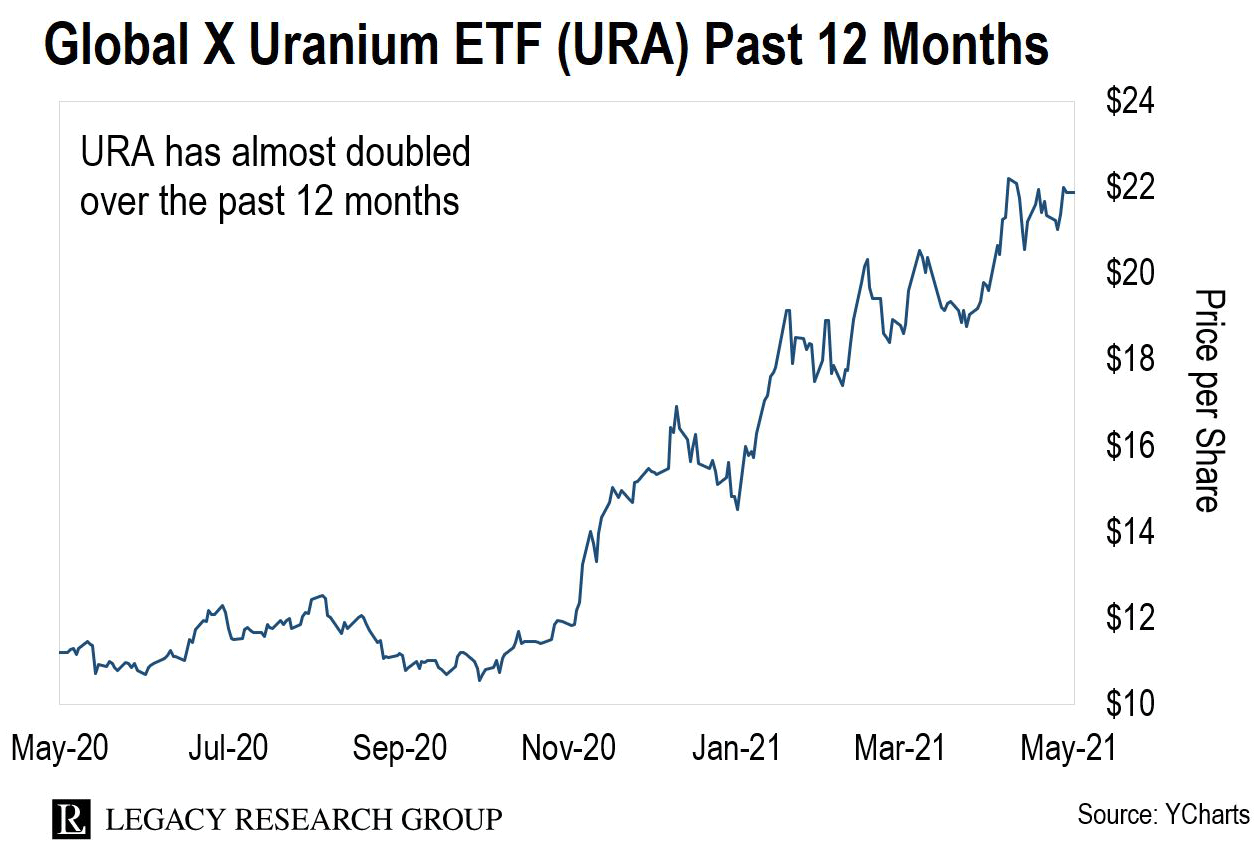 But the interesting thing is that that is really a blip when it comes to where uranium stocks could go. URA is still down 83% from its peak before the Fukushima Daiichi nuclear disaster in 2011. I’m sure you remember when that reactor went down in Japan.

So what we’re seeing here is a shift in energy. Uranium stocks are catching a big uplift from that shift – 96%, or a double, over the past 12 months.

But in the second chart we’re going to show, going back to 2012, you can see it’s hardly noticeable on the chart. We’re still 83% beneath the highs. 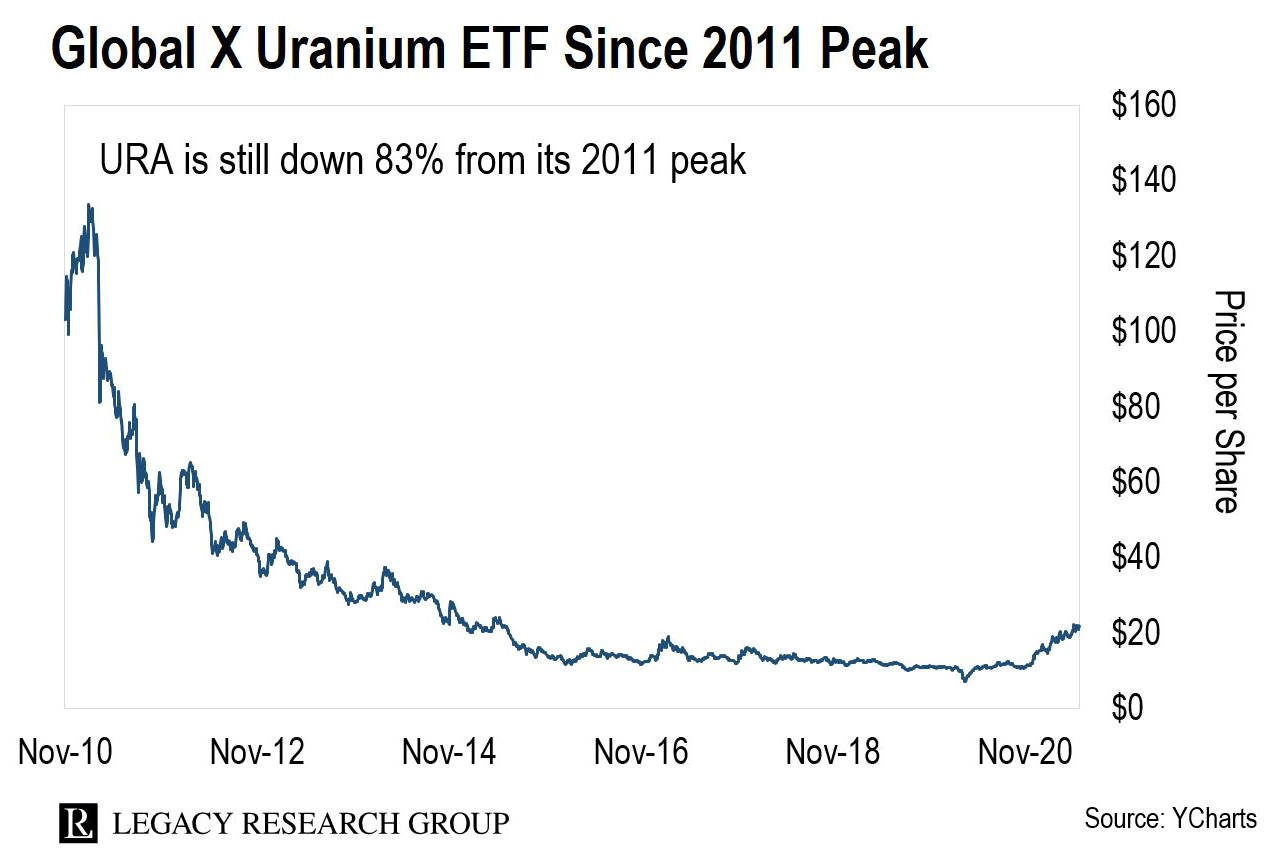 Nick Giambruno, another analyst at Casey Research, has been banging the drum on uranium. He says he can’t think of a commodity with more upside and less downside than uranium right now.

And he believes we’re much closer to the bottom than the top of what he sees to be a historic bull run for uranium setting up right now.

Tom: Thank you for bringing this to my perspective, Chris. This is totally off my radar. Now, it’s on my radar. I’m going to start doing some research and see how this can be a strategy I use to grow and protect my wealth.

I do have a follow-up question, though. Is this something you might be diving deeper into in some upcoming Legacy Inner Circle issues with the experts that you have available to discuss this with?

Chris: Yes. What we do at Legacy Inner Circle, our premium weekly publication that supplements The Daily Cut, is we take deep dives into these big profit themes that we track.

I’m going to be emailing Dave after we record this. I’m hoping to set up an interview with him because I really want to get his perspective on what’s going on.

He’s been tracking this for quite some time, tracking the big picture, which is that we’re in one of these transitions. That’s how Dave sees it.

And there are lots of opportunities. Dave is a commodities guy. He’s pretty neutral on whether we should have one type of fuel or another type of fuel. What he’s interested in is the profit opportunities it’s going to generate.

And they’re going to be huge because, typically, when we have these energy shifts, there are huge profit opportunities.

If you were investing in oil companies when the motor car replaced horsepower, essentially at the beginning of the 20th century, that would have been a great place to be. So, with uranium (and the tech metals), we’re seeing that level of opportunity. And it’s certainly something we’re going to be looking at more in Legacy Inner Circle.

Tom: Awesome. Well, thank you once again for bringing that to my attention, as well as the viewers of The Weekly Pulse. I look forward to learning more as you discuss this with the experts inside Legacy Inner Circle.

Tom: If you’re still here, that means you’re not yet a part of Legacy Inner Circle. And this is one example of how today’s Weekly Pulse discusses something that you’d never really considered. This is one of the many topics Chris has a look into, based on him having access to all the experts within Legacy Research with a wide variety of expertise and knowledge.

So Chris, for those who aren’t yet inside Legacy Inner Circle, why is now the time to look closer and join us inside the members’ area?

Chris: What we do at Legacy Inner Circle is we really follow these market megatrends. Cryptocurrencies is one of the big ones we’re looking at. And that includes the whole blockchain technology plus cryptos.

We’re also looking at legal cannabis, and how that’s coming out of the shadows, going from a black market to a legal market, and how its legalization is rolling across the states.

We’ve been very focused on bleeding edge technology. We tap into Jeff Brown’s expertise a lot, our tech expert at Legacy. Jeff is a former Silicon Valley insider, brilliant guy on tech. We’ve been looking at gene editing stocks, electric vehicles, 5G, those types of themes.

But there’s another thing we track and that’s commodities. And that’s where Casey Research – one of the publishing divisions that makes up Legacy Research – really comes in handy. It’s great to have these guys on our speed dial. Dave, as I mentioned in the video, is a trained geologist. He has gone and explored for copper deposits, and then financed the plans and put them together. He’s an insider in that industry.

And as I said, he’s not someone who’s pushing a political agenda with clean energy. He’s just recognizing that this is a thing that’s happening. He can see it going on inside the industry. I’ve talked to him about it before.

So we get to tap into some pretty deep expertise, which is what I love so much about Legacy Inner Circle. For folks who don’t really know, every week, we bring people a big money-making opportunity from the team of analysts at Legacy Research – Teeka Tiwari, Jeff Brown, Dave, Nick Giambruno, Jason Bodner.

We get to take deep dives, take people more in detail than they’ll get in, say, a daily e-letter. And we also make recommendations for moves they can make in their portfolios to profit from these big megatrends that we track.

Tom: You definitely want to take a close look and join us inside the members area, for the reasons Chris mentioned. Plus much, much more. It’s definitely one of those under-promise and over-deliver scenarios. It is focused on growing your wealth and protecting your wealth.

So you have everything to gain, nothing to lose. Click the link. Go check it out. Take advantage of this special offer. And we look forward to seeing you inside the members’ only app as well as the members’ area in the online environment as well.

Chris, thank you, and I look forward to learning more about this topic inside some upcoming Legacy Inner Circle deep dives with the experts.

The free Weekly Pulse videos will help you get ahead of the big, money-making trends shaping the markets so you can profit and protect your wealth in this rapidly changing world.