If you’re joining us for the first time, welcome aboard!

Our mission at this e-letter is to plug you into the best moneymaking ideas from Teeka Tiwari, Jeff Brown, Dave Forest, Nomi Prins, and the rest of the Legacy Research team.

On Fridays, we feature questions your fellow readers send in… and responses from the team. As always, you can get in touch at [email protected].

We love to hear your questions and comments – even the grumpy ones! So don’t be shy.

And I (Chris Lowe) recommend some ways you can ride out the pullback in stocks.

First, we turn to our tech investing expert, Jeff Brown.

In his model portfolios, he’s given his readers the chance to close out gains of 340% on computer vision chipmaker Ambarella (AMBA)… 432% on gene-editing company Synthorx (THOR)… and 448% on artificial intelligence (AI) and gaming chipmaker Nvidia (NVDA).

But Jeff doesn’t just spotlight profit opportunities. He also keeps a close eye on bleeding-edge developments in the tech industry.

One of these is the metaverse. As I’ve been showing you, it’s the next evolution of the internet. And it’s quickly going mainstream.

Instead of looking at information on a screen… we’ll step inside and explore 3D virtual worlds.

Right now, a lot of folks think the metaverse is all about kids in virtual reality goggles playing video games. But they’re missing the big picture.

There are way more applications for metaverse worlds.

It’s a metaverse world built on the Ethereum (ETH) blockchain. It allows its users to buy digital land, set up businesses, and trade digital assets.

Plus, the folks there want to allow users to interact online with their loved ones after they die.

A Czech developer called Artur Sychov heads up the company. Several years ago, he lost his father to cancer. That led him to explore ways of preserving someone’s personality after death using digital technology.

The plan is to use AI and the now deceased’s personal data from while they were alive to create a virtual avatar that can “embody” someone who died. This digital creation would look, talk, move, and act just like the real person.

Somnium Space wants this avatar to be so lifelike that a family member or friend wouldn’t be able to tell the difference for at least 10 minutes.

It’s a controversial idea. Jeff’s readers have mixed feelings on whether tech like this is comforting… or disturbing.

But as you’ll see from Jeff’s response below, he believes this kind of thing will one day be the norm.

Reader comment: I see it as a great way to document someone’s life and pass it on to loved ones who want to reminisce.

Reader comment: I love the idea of getting uploaded into the metaverse and interacting with my loved ones after I pass!

I wish this had been around when my grandma was alive. Even though she didn’t complete fourth grade, she was the wisest woman I’ve ever met. I would be talking to her every day!

Reader comment: No matter how much perceived comfort this idea may provide, I believe it would interfere with the natural grieving process and unnecessarily prolong it.

People could get stuck in a psychological loop, a bit like an addiction. My wife passed away at the age of 48, way too young. But I grieved and moved on. Two years later, I married a wonderful woman.

I suspect staying in a relationship with a person who’s passed would not have afforded me this opportunity.

Jeff’s response: Thank you to everyone who wrote in about this topic.

As we can see, some support the project and find it appealing. The power to reconnect with loved ones has serious emotional pull. So I suspect Somnium Space will find plenty of users.

It also shows how many uses there are for metaverse technology. We’re on the cusp of its take-off… and there are sure to be more and more innovations in the coming years.

As I suspected, others find this idea disturbing. Failing to navigate the mourning process is a reasonable concern.

But whether we like it or not, a mix of metaverse and AI tech will work toward these purposes. There will be a massive market for this kind of thing. And it will be normal to see within the next five years.

Switching gears, a question for Nomi…

Two decades ago, she quit a seven-figure job at Goldman Sachs (GS) to help regular folks retire in comfort using the insights she learned on Wall Street.

She’s also an expert on how central banks affect the economy and markets.

And she’s exposed the influence central bankers have over our lives in two of her books – All the President’s Bankers and Collusion: How Central Bankers Rigged the World. 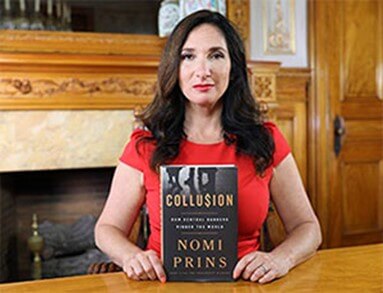 Nomi with her 2018 book, Collusion

Since the start of the pandemic, a torrent of newly created money has flooded into the economy.

This includes the $4.6 trillion in stimulus from Washington… and another $4.2 trillion from the Fed.

Nomi tracks where that cheap money flows. That’s led her to call infrastructure spending one of her top five investment megatrends right now.

But one of her readers has his doubts…

Reader question: Yeah, right! It seems like every freaking president since George W. Bush has passed some $1 trillion bill for “infrastructure.”

So far, I haven’t seen any improvement. Bridges keep falling. Potholes are everywhere. Ports and airports proudly prove we are a banana republic.

Only fat cats are getting fatter. I don’t hold my breath this time, either.

Nomi’s response: Hi, Marius. You won’t get any argument from me about government inefficiency.

There will be lots of red tape around the rollout of the infrastructure bill. But my goal is to follow the money and recommend ways you can profit. And history shows when Washington invests in a sector like this, deep-pocketed Wall Street players do the same.

Even if some of the promised funds get tied up in bureaucracy, they’ll touch nearly every part of the American economy.

And that means there will be many ways to profit…

I expect a large chunk of this cash from Washington and Wall Street will flow into raw materials. Copper is at the top of the list.

The world has run on oil for the last century. But the 21st century will run on copper. By the end of the decade, every major part of the economy will need this metal.

Copper is already part of personal electronics and construction. Now, demand for it in energy and transportation is growing.

It takes four to six times more copper to power wind and solar plants than what conventional power plants need.

Meanwhile, EVs use three times more copper than internal-combustion-engine vehicles. And with countries around the world pushing for clean energy, the EV market is set to explode.

Today, about 10% of new vehicle sales in the world’s major markets are for EVs. By 2030, that figure could be closer to 50%, according to Bloomberg.

Copper prices rose 25% last year. I expect even bigger gains ahead. So now is a great time to buy. One way to do that is through the United States Copper Index Fund (CPER). It’s an exchange-traded fund – or ETF – that tracks the price of copper.

To hear more from Nomi on her investment case for copper, check out my Q&A with her in yesterday’s dispatch.

If you don’t already know him, Jeff used to manage $200 million in Silicon Valley.  By the time he turned 42, he’d made so much money, he retired to spend more time with his family.

But Jeff is a trading junkie. So he now heads up his own trading advisory business, Jeff Clark Trader.

He specializes in profiting from the exact kind of whipsaw moves stocks have made lately.

And he recently developed a trading technique so powerful it could double your money over and over again… sometimes in hours. He’ll share all the details during a special presentation next Wednesday at 8 p.m. ET.

Meanwhile, one of Jeff’s readers got in touch to find out how to time his trades for maximum profits…

Reader question: Sometimes I see a trading setup that should help a stock go up in the future. Should I take profits early or hang on for larger gains? Do you have any rules or guidelines, especially when it comes to selling half?

Jeff’s response: It’s a great question, Skip. My rules around selling are simple…

I made that plan based on logic before I had any money at stake. Once money is at stake, things get more emotional. You know what I mean…

You’re delighted to see your stock at $15. You’re listening to the talking heads on TV. Some guy says the stock you own will go to the moon. You want in.

That’s emotion, not logic. And as a trader, I’ve always regretted acting on my emotions.

So I always recommend selling half of a position once we’ve doubled our money in the model portfolio. That way, you’re taking your capital back and eliminating the risk of a loss. Then I’ll recommend selling out completely when we hit my original target.

That may sound fuddy-duddy. After all, that stock could go higher, and my readers will have left some profits on the table. But I’ve been trading for 40 years. And I plan to keep doing it for another 40 years, God willing. So my biggest concern is that my readers don’t lose money. If you lose enough money, you’re out of the game.

That’s why I consistently preach taking profits. Any time a trade I recommended hits its target, I tell you to sell. I don’t care what happens to the stock after that. If it keeps climbing, that’s okay. Somebody else can make money off of it. My readers already have theirs.

Don’t forget Jeff’s special event next Wednesday. He’ll show you how he’s personally taken advantage of a new strategy he’s been working on to double your money in just 45 minutes.

And get this… In backtesting, he scored a 95% win rate. So make sure to secure your spot for Jeff’s event here.

Before I wrap up today, I want to address the sell-off in stocks…

This shift in sentiment has brough the tech-laden Nasdaq-100 index back to March 2021 levels.

I know drops like these can be upsetting to watch.

But it’s critical you don’t do something rash like panic sell.

Instead, keep Teeka’s advice in mind and treat this kind of volatility as the price you pay for a chance at life-changing gains.

I covered this in more detail here. Also, check out my recent dispatch on how diversifying protects your downside risk.

Do you have a question for the Legacy team? If you send it to [email protected], I’ll do my best to track down an answer for you from one of our experts.