We’ll begin with a quick thank you…

Yesterday, we wrapped up the second annual Legacy Investment Summit in Carlsbad, California.

If you made the trip to be with us, thank you.

Our marketing director, Fernando Cruz, summed it up best yesterday from the podium…

You could have been anywhere else… doing anything else. But you chose to take time out of your schedule to spend two days with the Legacy team and your fellow readers.

That’s what makes these events possible. So thank you again… and safe travels. I (Chris) look forward to seeing you at next year’s summit.

For instance, colleague Teeka Tiwari argued the case for why the mainstream was dead wrong about a looming recession.

Our go-to cannabis investing expert, Nick Giambruno, showed why cannabis stocks are not in a bubble, as some pundits have been saying.

And Marco Wutzer, who heads up our blockchain investing advisory Disruptive Profits, showed how readers could profit from the “oil of the 21st century” – digital data.

As regular readers know, here at the Cut we urged you to buy gold last summer, back when it was beaten up. 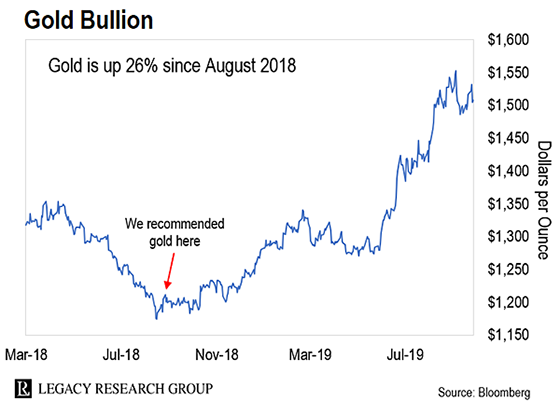 But if you missed the rally so far, don’t worry…

And he urged folks not to miss the opportunity to profit this time around. (Rick pointed out that the typical bull market in gold takes the median gold stock between 200% and 1,200% higher… in as little as 18 months.)

And gold industry insider E.B. Tucker showed folks why, despite a huge run-up already in 2019, it’s not too late to get in on the gold rally.

E.B. says the “mother of all rallies” is on its way for gold…

Like Rick, E.B. knows the gold market inside out.

He used to comanage a fund that invested in precious metals mining stocks. Now, he’s on the board of a gold company.

He’s a regular at gold conferences. He also frequently meets with gold mining execs… and other industry insiders.

And E.B. says sentiment is still surprisingly negative in the sector. That tells him the rally is nowhere near done yet. E.B.…

I just got back from the Denver Gold Forum. It’s one of the longest-running precious metals investing events in the U.S. And even with gold up around 20% since the start of the year, there wasn’t a lot of buzz there at all.

From the peak in 2011 to the bottom in 2015, gold fell 45%. Mining execs are still haunted by the last collapse in prices. Some of them are saying they won’t invest in any projects that don’t make a profit with gold at $1,200.

At the end of this rally, you’re going to have the same people speculating on projects that pay off only with gold at $5,000 an ounce. They’ll be telling you they can make gold on Mars work.

This just tells you how early we are. It’s unbelievable. This is going to be the mother of all rallies.

E.B. told the folks in Carlsbad that the best way to start getting exposure to this trend is to buy some physical gold.

Once you’ve done that, you can consider adding some extra oomph by buying best-in-breed precious metals mining stocks.

In yesterday’s dispatch, we shone the spotlight on Jason Bodner, who heads up our Palm Beach Trader advisory.

As we showed you, Jason has a stellar track record of picking market-beating stocks. But we’re not asking you to just take our word for it.

Instead, we want to show you just how lucrative following Jason can be. And to do this, we’re hosting an event in New York City next Wednesday night…

You see, a team of Ivy League researchers and quantitative analysts from Cornell and Columbia studied Jason’s system over three decades.

Their study included seven years of live trade data and 22 years of backtested data. Listen to what they discovered…

For one, Jason’s system identified the No. 1 stock on the S&P 500 almost every year (including the past six years in a row).

Jason’s system was also able to pinpoint 968 opportunities that could have made you between 10-to-1 and 70-to-1 on your money.

It also beat some of the world’s greatest investors – including Warren Buffett, Carl Icahn, and Ray Dalio.

Over the three decades the Ivy League team looked at, you could have turned just $1,000 into more than $19.7 million.

In fact, Jason’s track record is so good, we’re starting to wonder if Jason has created the world’s first unbeatable stock system.

That’s not to say Jason’s system was easy to put together.

It involves 80 algorithms that incorporate artificial intelligence and machine learning… formulas created by Nobel Prize-winning mathematicians… as well as the strategies of some of Wall Street’s most elite traders.

We sure hope so.

Because we’ve put a lot of work into showing you why Jason’s system is a must-have if you’re looking to beat the market consistently.

For the first time ever, we’ve gathered an outside panel of experts to help us put Jason’s system to the ultimate test.

They include the former head of research sales at Bloomberg Tradebook, Craig LoGrande… $2.5 billion asset manager Louis Navellier… Gordon Scott, the head of educational content at Investopedia Academy… and David Hamilton, an NYU Master of Data Science who has traded hundreds of billions of dollars for JPMorgan and BNP Paribas.

That’s why I encourage you to register instantly to attend Jason’s NYC broadcast next Wednesday at 8 p.m ET.

He’ll use it to target the No. 1 stocks in some of the hottest market sectors today – including gold, cannabis, crypto, and 5G.

If you ask me, given Jason’s track record, it’s worth watching the event just to get these picks – for free.

To make sure you don’t miss a thing, register here with one click.

P.S. One of the most popular booths at the Legacy Investment Summit was hosted by Bonner Private Wine Partnership. Bill Bonner’s eldest son, Will, runs it. It’s a club dedicated to searching the world for astounding wines from little-known winemakers.

Will and the team hosted a bunch of tastings. And judging by the mob of Legacy readers around Will’s tasting booth, it was a big hit. (Will even brought a high-altitude Argentine wine made with grapes grown on the Bonner family ranch in Salta.) To find out more about how to join Will’s wine club, read on here.

P.P.S. Legacy Research cofounder Doug Casey and our go-to tech expert, Jeff Brown, also took to the stage at the Summit. They discussed tech’s potential to change our lives for the better…

Next week, we’ll be bringing you some more of the highlights from the Summit, so stay tuned.