Gold is no longer a falling knife… Private deals in the sector are running hot… Why “disaster insurance” is crucial today… In the mailbag: It’s time to do the “chicken run”…

2018 hasn’t been kind to gold investors…

Since its peak this year, gold bullion is down 11%.

And gold stocks, as tracked by the VanEck Vectors Gold Miners ETF (GDX), are down 22%.

But as we told you yesterday, the big money is to be made when assets are selling for bargain prices.

As the old-timers say, “Don’t try to catch a falling knife.”

Buying into a market in freefall is dangerous. Prices may be low, but they’ll be headed even lower.

Instead, you want to wait until prices are in rally mode again.

And as you can see from the chart below, prices for both gold and gold stocks started to bounce back earlier this month. 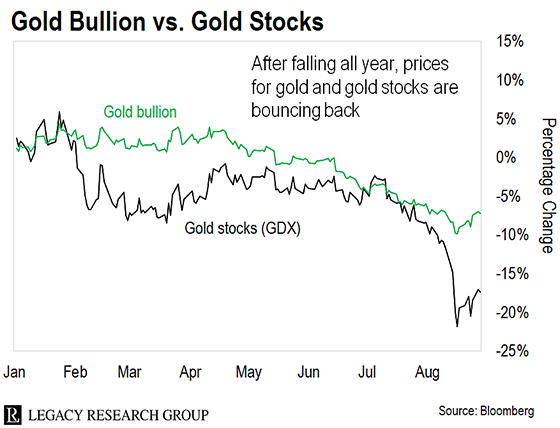 He has more than 20 years of field experience in the oil-and-gas and mining industries. And he helps mining entrepreneurs raise capital to fund new projects.

This gives him an insight into the sector you won’t read about on Bloomberg or hear about from TV’s talking heads.

And as Dave told us, mining industry insiders are opening up their wallets to fund new mines right when mainstream investors are throwing in the towel. Dave…

Many traditional brokers and funds have turned out the lights and closed the door on gold over the last few months. But the fall in the gold price has increased investment interest in some corners of the financial world.

For instance, after the gold price hit $1,250 in July – the lowest it’s been since December 2017 – it didn’t take long for me to find a group that was happy to commit $5 million to a gold mining project in Brazil.

They told me, “We really like gold. It’s so unpopular right now.”

These investors are not alone. Dave again…

Over the last few months, I’ve been hearing more about gold financings quietly getting done – at a significant scale. One private firm I know just raised $8 million for a slate of gold projects in Africa. The assets are in the exploration stage, and the company isn’t trading yet.

There’s another reason to be bullish on gold right now…

This shouldn’t come as a surprise. One reason you own gold and other hard assets is as “disaster insurance.”

They tend to rise in price when folks are worried about rising political and economic risks. And if the world goes to hell in a handbasket, these will be the last assets left standing.

As Bill Bonner Letter coauthor Dan Denning just told readers, the 40% plunge in the Turkish currency, the lira, against the dollar this year could trigger another global financial crisis. (Paid-up Bill Bonner Letter subscribers can catch up in full here.)

Meanwhile, Nick Giambruno – who heads up our Casey Report advisory – warns that the world’s largest economic bloc, the European Union (EU), is on the verge of collapse.

Nick just put boots on the ground in Hungary and Italy, where voters have elected government parties that are hostile to the EU. As he reported back this morning from Turin, Italy…

The migrant crisis is fueling the rise of anti-EU populist parties all over Europe. It is the No. 1 political issue here right now.

This is accelerating the collapse of the EU. It’s a simple relationship. The more migrants that arrive in Europe from Africa and the Middle East, the more popular anti-EU political parties become, and the weaker the EU becomes.

There’s trouble closer to home, too…

Legacy Research cofounder Bill Bonner reckons the U.S. is more divided right now than it has been at any time since the War Between the States.

And as he showed in a recent must-read issue of his daily e-letter, when “degenerated politics” meets “late-cycle bubble finance,” the result will be larger deficits, a weaker dollar, and a downturn in economic growth.

These are all perfect conditions for a resurgence in gold.

If you want to add gold to your portfolio, check out The Gold Investor’s Guide our guys at Casey Research put together. You’ll learn how to buy physical gold, and – if you’re willing to bear more risk for higher upside – how to get exposure to gold stocks.

And keep an eye on your inbox tomorrow… As you’ll find out, our mission to expose Silicon Valley’s thought police is gaining support from the holder of the highest office in America. Stay tuned…

In the mailbag: It’s time to do the “chicken run”…

The battle is on. Thanks, Chris. I look forward to what you and your team come up with.

I’m absolutely delighted by what you are doing. You have my full support and dedicated interest indefinitely.

I have zero social media presence, other than email. I’ve never been a part of Facebook and never will be – I disable it on my Android phone. (I can’t uninstall it though – what does that tell you?)

Convenience in modern U.S. culture is frequently equal to giving up all your privacy and individual rights to others who do NOT have your best interests in mind.

As Doug Casey would say, it’s time to do the “chicken run” from the U.S. As unbelievable as that may be to the vast majority of U.S. citizens (who will never see it anyway – too many dwell in the “matrix”), you must escape while you still can.

I applaud your efforts. I fear this is getting too big to disable. Someone has to have the “BIG Stick” to do this as a Patriot.

As promised, we’re putting the finishing touches on a simple guide to reclaiming your digital privacy. So keep an eye on your inbox later this week.

And as always, keep your questions, stories, and suggestions coming at [email protected].