When we left you yesterday, we promised to show you how Amazon’s Echo “smart speaker” is eavesdropping on you.

First, an important update on the selloff in the crypto market.

Yesterday, Bitcoin fell by about 10%. You can see this in the chart below. 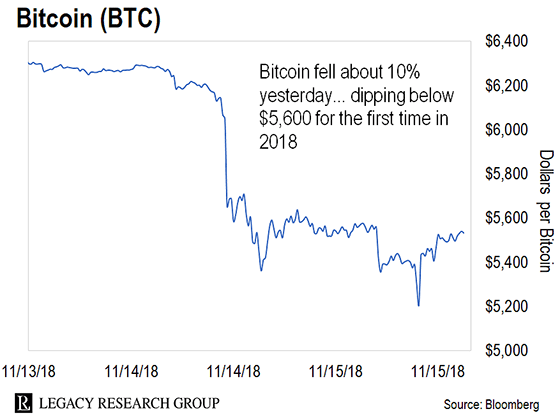 And Bitcoin wasn’t the only crypto to plunge yesterday. The top 20 cryptos by market value fell, on average, 10.5%.

This brings the total value of the crypto market – the so-called crypto market cap – back to levels not seen since November of last year.

And at writing, the crypto market continues to head south.

We were expecting a rally in Bitcoin…

And a nasty one at that.

So we reached out to colleague and world renowned crypto investing expert Teeka Tiwari to get a better sense of what took the market lower.

Here’s what he told us…

We’re seeing a very contentious “hard fork” in Bitcoin Cash. A hard fork is when the programmers can’t agree which direction the project should go. So they split into two projects.

Craig Wright – who claims to be the pseudonymous creator of Bitcoin, Satoshi Nakamoto – is threatening to dump all his Bitcoin to support the Bitcoin Cash hard fork.

In other words, one of the biggest… and highest-profile… holders of Bitcoin is threatening to tank its price by liquidating his position in one fell swoop.

And as Wright posted on Twitter, bitcoin plunging all the way to $1,000 per coin would “not phase” him.

So it’s no big surprise that a lot of bitcoin investors are panic selling.

We dealt with something similar last year when Roger Ver and Jihan Wu – two huge holders of Bitcoin – dumped Bitcoin to support Bitcoin Cash. The whole crypto market got walloped as a result.

Investors who got shook out at the start of the year missed out on the gains that followed that bout of volatility.

What should you do now if you own cryptos?

The most important thing is to not get swept away by the negative headlines… and panic sell.

Bitcoin started trading in 2010. And as we told you last month, since then, it’s seen five peak-to-trough plunges – or “drawdowns” – of 40% or more.

But the super-charged gains that followed have more than compensated for the wild ride. Take a look for yourself…

Remember, ups and downs like this are not unique to the crypto market…

In his book 100 Baggers: Stocks that Return 100-to-1 and How to find Them, colleague Chris Mayer revealed how dramatic price plunges are common characteristics of big stock market winners, too. As he wrote…

The ride to becoming a 100-bagger is not often easy. This reminds me of a story from 2012 by fund manager Dan Oliver at Myrmikan Capital. He pointed out that Apple from its IPO in 1980 through 2012 was a 225-bagger.

Those who held on had to suffer through a peak-to-trough loss of 80% – twice! The big move from 2008 came after a 60% drawdown. And there were several 40% drops. Many big winners suffered similar awful losses along the way.

As regular readers know, volatility is a feature, not a bug, of highly speculative markets such as the crypto market.

It’s why Teeka recommends his readers invest only small grubstakes – $200 to $400 for smaller investors and $500 to $1,000 for larger investors – in each individual crypto position.

This way, you still have the chance to make outsized gains. But you limit your downside, so you can sleep soundly at night.

And as the Associated Press reported, a judge ruled that the authorities can examine recordings made by an Amazon Echo… which is equipped with the company’s virtual assistant, Alexa.

This calls into question Amazon’s claim that the Echo is listening for a “wake word” to start recording.

The court order that granted the search warrant confirmed there was “probable cause to believe” that the Echo picked up “audio recordings capturing the attack” and “any events that preceded or succeeded the attack.”

It’s not the first time an Echo has gone rogue…

Earlier this year, a woman in Portland, Oregon, told a local news station that her Amazon Echo had recorded a private conversation… and then shared it with one of her husband’s employees.

There have even been bizarre cases of the Amazon Echo suddenly laughing of its own accord.

Lying in bed about to fall asleep when Alexa on my Amazon Echo Dot lets out a very loud and creepy laugh… there’s a good chance I get murdered tonight.

Having an office conversation about some pretty confidential stuff and Alexa just laughed. Anyone else ever had that?

It didn’t chime as if we had accidentally triggered her to wake. She simply laughed. It was really creepy.

You may think this is just a prank…

But Amazon acknowledged the creepy laughing. As it told tech news website The Verge, “We’re aware of this and working to fix it.”

And it’s not just creepy laughing that has Echo users concerned.

The Wall Street Journal reported that one Echo owner “was sitting on her bed crying one day after having just quit her job, listening to music, when she said she heard a voice tell her, ‘It’s going to be okay.’”

The device’s owner reportedly became so freaked out she unplugged it and placed it in a drawer for several days.

Most folks will shrug this off. The Echo is no doubt convenient. But as far as we’re concerned, it’s just another outgrowth of the digital panopticon we’ve been warning you about.

Finally, in the mailbag: “Nobody has ever died of a marijuana overdose”…

Earlier this week, reader Charles H. said “legalizing marijuana is a very bad idea.” And he’s not the only reader who’s concerned…

I agree with Charles that we are moving in a wrong direction with legalizing pot. Haven’t we learned anything from alcohol? So many drunk-driving deaths, so many families uprooted, and the cost to the society resulting from that.

But pot legalization has a lot of supporters, too…

It is happening anyway, just like prohibition, the “war on drugs” by our government has been an abysmal failure. May as well regulate, tax, and control it. That will certainly put a significant dent in the underground drug economy. It is better to have people working and paying taxes instead of having them in jail for violation of the current controlled substance possession laws.

It sounds like Charles H. would make a great U.S. Attorney General. I think it’s absolutely crazy to consider marijuana a Schedule 1 drug, along with LSD and cocaine. Nobody has ever died of an overdose of marijuana. Can’t say that about alcohol and a variety of legal prescription drugs that are FDA approved and readily available from your local MD pusher. Talk about unintended consequences.

Bringing the distribution and sale of marijuana into the light through legalization will reduce crime, reduce the cost of unnecessary incarcerations, and give states additional tax revenue.

In addition, the U.S. is behind the rest of the world in the research of the benefits of CBD. Why should we have to go to another state, Canada, or Europe to secure potentially life-changing treatment? The bus has already left the station.

My other cannabis-related investment theme will be to short the corrections industry that hopefully will shrivel up and die without a steady influx of casualties of our current drug policy.

I have no problem with people who decide to allocate their investment funds in a manner that aligns with their personal values – that seems like a good thing when it leads to a life that is internally and externally consistent.

However, to those who would use the government monopoly on lethal force to decide what investments other people can make, I will continue to make the argument that when you give the government that kind of power, there will come a time when one of your values is compromised and then it won’t feel quite so righteous.

What’s your take? Is pot legalization going to turn America into a nation of stoned zombies? Or do you believe that people should be able to decide for themselves what they put in their bodies, as long as they’re not harming anyone else?

Send your thoughts and ideas to [email protected]. We read every email we receive.