Up first in today’s mailbag, a curious reader asks the one question that cuts right to the heart of the debate over cryptocurrencies, like bitcoin.

Instead of asking one of our resident crypto experts to take that one on, let’s hear from someone who isn’t a true crypto believer…

I’m talking about Legacy Research cofounder Bill Bonner (The Bonner-Denning Letter and Bill Bonner’s Diary). His answer is sure to surprise you…

Bill’s answer: I’ve been watching, studying, and thinking about money for a long time. I’m coming at this from the angle of money. And money is a very interesting and nuanced phenomenon.

Gold has proven useful as money. It has traditionally been used as money because it works as money and nothing else. Gold is durable, fungible, divisible, and portable. And it is restricted in supply. Those properties make it a very good money.

For instance, you can grow a crop of tomatoes. The tomatoes will be gone in two weeks. But you can sell those tomatoes while they are still fresh… receive gold in payment for them… and enjoy the fruits of those tomatoes 50… or 100… or 1,000 years later. That’s the beauty of gold.

And I see that – theoretically, at least – bitcoin does the same thing. It’s also divisible, fungible, durable, portable, and limited in supply – all the properties of gold. But it also has one more thing that gold doesn’t – you don’t have to put it in storage and hire a guard to watch it because it’s secured on the blockchain.

Another key feature of both gold and bitcoin is that they are tethered to the real world – the world of time. It takes energy – in the form of computer processing power – to “mine” new bitcoin. The more of them you mine, the more time and energy it takes to mine the next one.

You could fill a library with what I don’t understand about the technology behind bitcoin. But in a purely theoretical sense, from what I understand, bitcoin could be an even better form of money than gold.

And it’s certainly true that the financial industry has become parasitical since the dollar came off gold. It uses fake money to con billions of dollars out of the Main Street economy… and shifts it to Wall Street and the Deep State.

Cryptocurrencies, on the other hand, are not state-run or state-controlled. And that’s got to be a good thing. Will they stand the test of time as gold has? That I don’t know…

Before we get to our next question and answer, a small clarification on Tuesday’s Daily Cut – “The $3.4 Billion Bet That the Feds’ War on Pot Is Ending.”

In that essay, Nick Giambruno (Crisis Investing and The Casey Report) showed why cannabis legalization in the U.S. is basically a done deal.

The average gain for the eight open recommendations in Nick’s “End of Marijuana Prohibition” portfolio at Crisis Investing is 151%.

And the top performer, Canopy Growth (CGC), is up 596%. You can see this in the chart below… 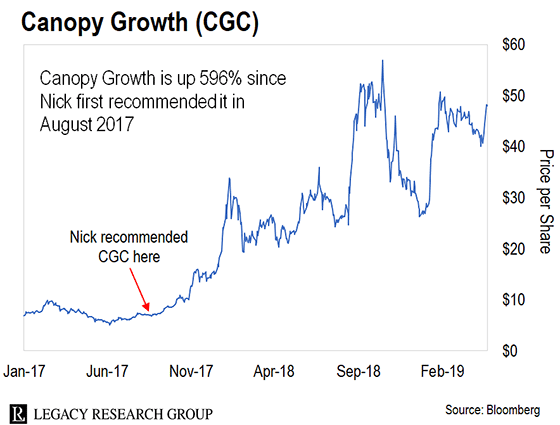 That makes it the No. 1 recommendation across all 22 of the advisories we publish under the Legacy banner.

But we should clarify one small point…

If you include high-flying cryptocurrencies, the No. 1 open investment recommendation across Legacy Research is Teeka Tiwari’s call on NEO (NEO). It’s up 7,504% since he recommended it in February 2017.

Looking strictly at stocks, though, Canopy Growth is our top open recommendation, right now. And, as Nick’s research shows, 600% looks to be just the tip of the iceberg.

And now back to your questions…

Reader question: I started trading in February this year, so I was not involved with the last downturn. For a rapidly falling market do you trade individual companies, or do you trade Dow and Nasdaq or the S&P indexes?

Jeff’s answer: Thanks for the question, James.

Whenever I’m expecting weakness in the broad stock market – like when technical indicators are starting to roll over from overbought conditions, or when the index charts appear ready to break down from bearish patterns – then I almost always look to trade the broad stock market exchange-traded funds, like SPY, IWM, QQQ, etc.

The reason is simple and straightforward… If you’re looking for a pullback in the market, then short the market. Don’t short an individual stock – because that stock may or may not trade in the same direction as the broad stock market.

The only exception I have to that is when I’m looking to trade individual sectors – like gold, semiconductors, oil & gas, etc. If I suspect an individual sector might be ready to make a big move in one direction or the other – regardless of what I think the broad stock market will do – then I’ll typically look to trade an individual stock (or stocks) in that sector, in order to create a more concentrated position.

Our question: What the heck is going on with health care companies? The S&P 500 Health Care index got knocked down almost 5% last week. That’s a huge move for an index that’s gone pretty much straight up since October 2016. So what’s the deal?

The S&P 500 Health Care Index is the weakest-performing index since Christmas and the whipping boy right now. But do you recall when Hillary Clinton came out and said she had her eye on health care around August of 2015?

The sector got pounded, only to come back swinging, and I believe this is a similar setup. But for now, the data indicates more short-term bumps ahead.

The important thing to remember is that people won’t stop getting sick. When this rotation is over… there will be great bargains.

If you’re not already familiar with Jason, we’ve got a special treat for you…

We just unlocked the presentation he gave to a packed house at last year’s Legacy Investment Summit. It’s titled “The 5 Outlier Stocks to Own Today,” and it sure delivered on that promise…

Here are the returns on the five stocks Jason identified that day: