Welcome to your weekly mailbag edition of The Daily Cut.

Each Friday, we tackle your most pressing questions on the markets… and about the ideas we share with you.

And this week… we focus on a question we’re getting a lot these days.

Which is better to own in a major crash: bitcoin or gold?

They’re both great ways to escape the mainstream financial system.

Both are also great ways to protect against the kind of monetary catastrophe Bill Bonner, Doug Casey, and other experts here at Legacy see in America’s future.

But as we teased out this week (catch up here and here), gold and bitcoin are also different in important ways.

Gold is a chemical element forged in space and found in the Earth’s crust. Miners have to dig it out of the ground at great expense.

And it’s been a store of wealth for thousands of years.

Bitcoin is the closest thing there is to digital gold. Each new bitcoin has to be “mined” computationally at great expense.

Bitcoin’s been up and running as the world’s first scarce digital asset since 2009 without interruption. Over that time, it’s shot up from an initial price of 3 cents to $19,000… minting about 18,000 bitcoin millionaires and four billionaires in the process.

But how would these two assets perform under extreme duress? Let’s get right into some of your concerns.

Standing by with an answer to our first reader question is our resident crypto expert here at Legacy Research, Teeka Tiwari.

Reader question: What happens if a major calamity shuts down the electrical grid and/or the internet? Gold would still be here. Electrons would go poof. How would you access your bitcoin?

Teeka’s response: If we’re talking a calamity that takes out the electrical grid or the internet, there will be much bigger things to worry about, like your health and safety. Not to mention safe drinking water and sanitation issues.

It also means point-of-sale systems are down… credit cards are just pieces of plastic… and ATM machines are offline.

And when it comes down to gold bars and coins, there’s still the issue of divisibility. You can’t just break off a chunk of gold to pay for something.

The bitcoin network is remarkably resilient, even in the scenario you describe. Bitcoin doesn’t need the regular internet to run. There are small satellites in remote areas of the world that run nodes of the bitcoin network and verify transactions. Transactions can also take place across mesh networks, which can run over radio waves.

These methods require power. But they’re not dependent on the grid nor internet.

Blockchain technology company Blockstream has been doing some great work in this space. The Blockstream Satellite network broadcasts the bitcoin blockchain – the ledger of all transactions – around the world 24/7 for free.

This shields against network interruptions. And it gives folks in even the remotest corners of the world the ability to use bitcoin.

And a crash or disaster that takes down the grid isn’t the only threat readers see for their disaster insurance.

For this next reader question, Bill Bonner’s right-hand man at The Bonner-Denning Letter, Dan Denning, chimes in…

Reader question: Can you give your opinion on the possibility that the government will confiscate gold?

Dan’s answer: It happened before. It could happen again. Never underestimate the power (or the desperation) of the Sovereign.

There’s an important difference, however, between now and 1933. That’s when FDR signed Executive Order 6102, which outlawed the hoarding and possession of gold.

The government did that to “demonetize” gold and separate it from the financial system and the calculations of ordinary citizens. What you’re seeing now, I believe, is the inevitable remonetization of gold.

The U.S. ended the Bretton Woods system and the convertibility of dollars into gold in 1971. We’ve been on a “fiat” standard since then.

The U.S., at least officially, has the largest official holdings of gold, at over 8,000 tonnes. If we’re entering a new currency regime – which I’m going to take as a given, as a full explanation of this point is beyond the scope of your question – gold is going to be a part of it. It will make the currencies governments issue more legitimate in a world where there’s so much government debt.

I think the feds will be quite happy for Americans to have gold in their hands because they will want to create the impression that the dollar is again backed by gold.

It’s possible they try to round up all that gold and put it in Fort Knox again. But there are just some risks there’s no hedging against. If the government’s coming for gold, it will have already come for your guns.

Just buy gold on the dips, extract your money from the banking system, and try to sleep well at night.

He’s been putting boots on the ground across America exploring what it means to live well, free, and safely. Part of that, he believes, is getting far enough away from the mobs and manias to be able to see and think clearly.

On the first trip, he went north with his brother David to Nebraska, South Dakota, North Dakota, Wyoming, and Montana. On the second trip, he went south with another brother, Brian, to New Mexico. You can see both routes below. 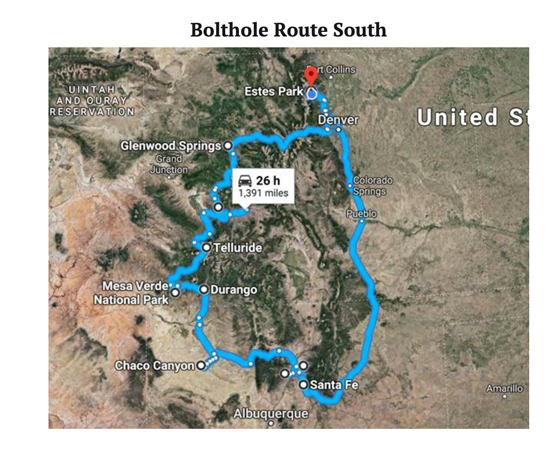 Dan’s criteria for a suitable bolthole are as follows…

Dan’s “Bolthole Tour” got him thinking about a concept he calls “functional wealth.” This isn’t wealth in the traditional sense. It’s not money in the bank… or stocks in a brokerage account.

But it’s nevertheless critically important. As Dan wrote his readers…

If ever there was a time to have “functional wealth” – the kind of wealth that provides personal safety and security for you and your family – it’s now.

For example, I recently bought a household generator for a brother’s mountain bolthole in case the power goes out (or is cut).

Dan then asked readers a fascinating question about this idea…

If you had $1,000 to spend right now and HAD to get rid of it, would you rather buy five shares of Microsoft or an electric generator for your house?

And they got in touch to share their thoughts…

I guess I will split my hypothetical $1,000 in thirds and buy some more gold and bitcoin plus veggie seeds for a garden, a cubic meter of mixed soil, and fruit-producing trees for planting.

I wouldn’t buy either. The money goes into the emergency fund. It will buy 10 or more shares of Microsoft when this settles out. We have solar power with battery backup and live in a relatively mild climate.

We have a well and a large garden space. We also have a decent arsenal and adequate ammo. Your gas generator will be useless when the tanker trucks stop delivering fuel to the stations.

The question is laughable. The ticking time bomb that is society today has become merely a question of when, not if, it will explode. It’s ridiculous to talk to people who still do not see the crack-up of society when it is clearly happening in real time and right in front of them.

Personally, we picked out two different systems: propane and solar. When you can power your house with Microsoft stock, let me know.

I would definitely buy the generator. The 500 pounds of beef I just butchered and put in my freezer would be at risk without it. But I already have a generator and food supplies and fuel and horses for transportation and ammo to defend at all. So I’d just buy more gold.

Get some more money and buy a bigger generator. Ammo and one-ounce silver rounds. Build a big greenhouse and secure your water supply. Get them before they get you. Most importantly, get right with God.

The generator! I own some stocks, so I am already in that game. Trying to live without electricity for any length of time is debilitating. I have had to do that a few times and would prefer to not go through that again.

To download a copy of Dan’s special report on his “Bolthole Tour”… and learn more about building functional wealth… click here.

What would you buy if you had to spend the $1,000? Microsoft shares or a generator? Write us at [email protected].