Welcome to the regular Friday mailbag edition of The Daily Cut.

A buzz has been building across the Legacy team this week.

It’s all about the “Penny IPO” strategy he’s developed… and why now is the perfect time to invest. Jeff will draw back the curtain on a subsector of the tech industry that offers life-changing returns.

The first “Penny IPO” he recommended to his readers gave them the chance at gains of 432% – in just 41 trading days. And Jeff says the opportunity ahead is potentially even more profitable.

So before you read on, make sure you sign up for that here.

Today, two of our crypto experts, Jeff (The Near Future Report) and Nick Giambruno (The Casey Report) clear up some misconceptions about bitcoin and other digital assets.

Also, Bonner-Denning Letter coauthor Dan Denning explores what would happen if the Fed tried to buy up the world’s most valuable assets using freshly printed dollars…

Reader question: I have been trying to educate myself financially and have yet to hear a clear explanation of cryptocurrency or digital assets. If a crypto’s value fluctuates, is not backed by anything, and can’t be used to buy a pizza or loan a friend a few “bucks,” just what good is it? How is it not a Ponzi scheme?! Please educate me!

Jeff’s answer: Thanks for the interesting question. Bitcoin is a digital asset that operates on a secure blockchain. It’s a digital store of value. You can then transfer that value to another person anywhere in the world, at any time, in a matter of seconds.

What makes bitcoin interesting is the blockchain tech behind it. The bitcoin blockchain is a cryptographically secure decentralized ledger. The transactions are immutable. That means they can’t be changed. And no individual or government can influence or change the code.

Your instincts are correct. If a digital asset isn’t backed by anything of value, it looks and feels like a Ponzi scheme. And there have been many such scams in the cryptocurrency space.

The Securities and Exchange Commission (SEC) is the main securities regulator in the U.S. It started to get aggressive, going after the worst of them last year. And it continues to do so this year. This is good. We need to weed out the bad actors from the industry.

And although there are a lot of these bad projects, there are also some fantastic ones. Some, such as stablecoins, are backed by fiat currencies such as the U.S. dollar. In that way, we can easily determine their value. But the digital assets you are referring to aren’t backed by anything.

These are the majority of cryptocurrencies. And the field of crypto-economics has emerged to address this problem. How to value a cryptocurrency that isn’t backed by any assets?

In general, the price of a coin (cryptocurrency) is determined by how many coins are currently in circulation, how many additional coins will come into circulation, over what time frame, and – here is the really complex part – the value of the overall cryptocurrency to its users.

This is essentially the value of the utility of the cryptocurrency as those who use it and/or understand its technological value perceive it.

The market is ascribing a value to what it believes the future utility of that cryptocurrency will be to society. Although that may sound odd, uncomfortable, and unconventional, it is a valid way to determine the price of a cryptocurrency.

And because high-quality cryptocurrency projects are built on advanced blockchain technology, they are very real and very different from a Ponzi scheme.

Thanks for the fun question.

Nick’s answer: What is money? Simply put, it’s something that facilitates storing and exchanging value… That’s it.

“Hard,” in this case, doesn’t mean something tangible or physically hard, like metal. It means “hard to produce.” By contrast, “easy” money is easy to produce.

Second, we must grasp that all value is subjective. There’s no such thing as objective or intrinsic value. Something has value because someone perceives it to have value to them.

Third, we must separate bitcoin from all the other cryptocurrencies for one simple reason. Bitcoin is the only one that is truly decentralized and not controlled by anyone. Nobody can get together and change the rules or alter its supply. It’s fixed for eternity by code.

All other cryptos have key players, insiders, and development teams that can potentially act like central banks and increase the money supply.

The other cryptos may have different use cases, but when it comes to money, none of them can come close to bitcoin.

The bitcoin phenomenon is the birthing of an entirely new form of money. We’re talking about the emergence of a new asset that became a significant global money in less than a decade. It happened because millions – soon billions – of people around the world subjectively valued bitcoin as money because of its superior monetary properties.

I have a lot more to say about this in this urgent briefing, and suggest you check it out for more information.

Switching gears, a reader wants to know what would happen if the Fed went on an international spending spree with its newly printed dollars…

Reader question: While the U.S. dollar preserves its reserve currency status, isn’t there opportunity for the U.S. to continue to print trillions and spend it buying up the world’s trophy assets?

But the U.S. Treasury can borrow at ultralow rates, partly because of the dollar’s reserve currency status. This is why the government can inject $6 trillion and run a deficit of $3 trillion, the biggest one in U.S. history.

You can buy a lot of other assets with that borrowed money: tanks, guns, whatever the $700 billion military budget allows for. But can you buy shares in public companies or real estate?

To do that, the Fed would have to act more like the Swiss National Bank (SNB), Switzerland’s central bank. The SNB began printing money to buy stocks a few years ago. It now owns 69 million shares of Apple – or about $7.4 billion worth at today’s prices.

Why wouldn’t EVERY central bank just print currency to buy stocks? Good question. As far as I know, there’s no reason the Fed couldn’t do that (although it IS technically restricted from buying corporate bonds directly).

But the real issue is how the market would take it. If you could just print money to buy anything you wanted… it would be counterfeiting, wouldn’t it? That would undermine the dollar’s reserve currency status.

In China, the Communist Party can direct state-owned businesses to use their foreign-exchange reserves to buy strategic or trophy assets all over the world. But most countries have foreign investment review boards that approve or deny these transactions.

If the U.S. suddenly directed a single agency – the Fed or the Treasury – to shop around the world for trophy assets, national governments might reject some of those transactions.

It won’t have escaped your notice that there are elections coming up in the U.S. in November. And one reader wants to know what they mean for stocks…

Jason’s answer: Markus, thank you for writing in.

You’ve prompted me to dig deeper into my data. I’ll need to do a more detailed study, but that’s beyond the scope of this response.

Here’s what I can tell you today – for the past seven presidential elections, since 1992, I saw a clear pattern: Big money sells ahead of an election and buys right after. Every time.

For each of those years, big money sold stocks prior to Election Day and bought in again after the results were announced. We can see this by following my proprietary Big Money Buy/Sell Index (BMI).

The BMI is a signal I’ve refined for over 20 years to tell me what moves the biggest traders on Wall Street make. It’s simple: As the BMI goes down, the big money is selling. As it goes up, the big money is buying.

Ahead of each past presidential election, the BMI drops and forms a “V” of varying steepness – rising after Election Day. Let’s look at the 1992 election as an example… 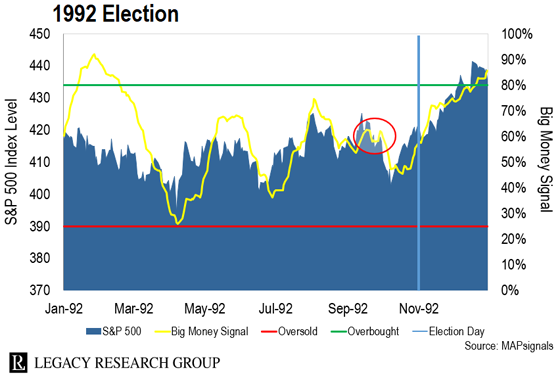 In each of the election-year instances I looked at, U.S. stock market bellwether the S&P 500 pulled back ahead of Election Day.

In all instances, the S&P 500 rose after Election Day – save for 2008. That was the year of the global financial crisis. The S&P 500 eventually bottomed in March of 2009 and rocketed higher from there.

Here’s the bottom line: If 30 years of history encompassing seven elections is any guide, we should expect a weaker stock market ahead of the election… and a stronger one after.

I have even stronger conviction that the BMI will fall prior to Election Day and rise thereafter.

This reinforces what I have known for a long time. When that dip comes, have a shopping list ready for the best-in-breed stocks – the kind that outperform the market no matter what.

I recommend these types of stocks, using the BMI as part of my unbeatable stock-picking system, in my advisory Palm Beach Trader. If you’re interested in how you can get involved, click here.

And thanks for your great question, Markus.

Have a great weekend, and keep sending in questions for your favorite analysts.

Our mailbox is always open at [email protected].