The market “generals” are in full retreat… What to do about the bitcoin bear… An invitation to an exclusive evening… In the mailbag: “We can’t stand in front of this moving train”…

Today, we have something special for you…

Before we get to that, an important warning about the 10-year-old bull market following the carnage on Wall Street this week.

We also have some more advice for you about how to handle the crypto bear based on the meteoric rise of two of the most successful stock stories in history – Amazon and Apple.

Investors took stocks to the woodshed again this week…

The drop wiped out all the gains for the year for those indexes.

That makes it the worst start to Thanksgiving week for the S&P 500 and the Dow since 2011.

And it’s the worst such start for the tech-heavy Nasdaq since 2000 – during the dot-com crash.

More ominously, the market “generals” are leading the retreat…

As regular readers know, when the stocks or sectors that have been leading the bull market higher – aka the generals – start to beat the retreat… it’s a sign the market has topped.

And the most recent set of generals has been the so-called FAANG stocks – Facebook (FB), Amazon (AMZN), Apple (AAPL), Netflix (NFLX), and Google (GOOG).

For instance, from the start of 2014 until they peaked this August, the FAANGs shot up 217%. That’s roughly three times the gain for the S&P 500 over the same time.

But as you can see in the chart below… the FAANGs are no longer on the rise. 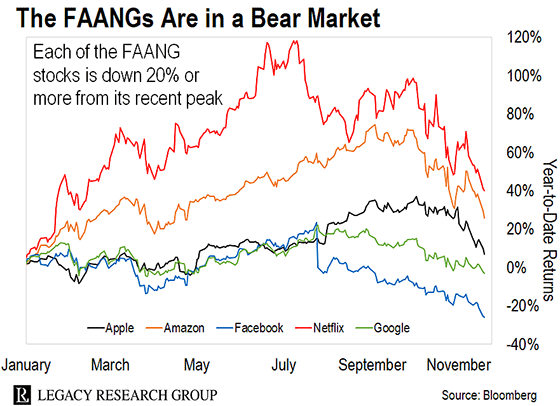 As you can see, each of the FAANGs is now down at least 20% from its recent peak… which Wall Street defines as a bear market.

Up until August, the FAANGs accounted for about 30% of the growth in value this year for the S&P 500.

Without that engine of growth powering the market higher… you have to question the staying power of this bull market.

It’s why – like every successful long-term wealth builder – you want a diversified portfolio that balances your stock market holdings with investments outside of the stock market.

(In case you missed it, our October 11 issue – Your Bear Market Survival Guide – shows you how to do just that. Catch up here.)

For now, the U.S. stock market has avoided a bear market…

The same can’t be said for cryptocurrencies.

Just look at bitcoin. It has the highest market value of any crypto – making up more than half the value of the entire crypto market.

And it’s deep in the red so far this year.

But if you invest in the early stages of a breakthrough technology such as bitcoin… and expect a smooth ride… you’re setting yourself up for lots of anxiety.

Volatility is the name of the game for cryptos. But that’s true of other investments, too.

But those who held on had to suffer through a peak-to-trough loss of 80% – twice. And there were several drops of 40% or more.

It’s tempting to see these price falls as aberrations. But it’s just how the game of investing works.

If these investments didn’t swing around in price so dramatically… everyone would have owned them from the get-go… and the potential for outsized rewards would have disappeared.

Bitcoin is a case in point…

But to realize those gains, you needed to endure at least four soul-crushing crashes.

As if that weren’t a wild enough ride, volatility came roaring back in 2013.

If so, you should steer clear.

But if you believe bitcoin has a bright future, volatility is not a reason to sell.

History shows that volatility is par for the course for bitcoin.

More important, each time the market has plunged in the past, patience and perseverance have paid off.

As pioneering crypto investor Marco Wutzer has been telling readers of our Disruptive Profits advisory, it would be a mistake to let the current market panic shake you out of your long-term positions. Marco…

I have no doubt the cryptos and the blockchain technology they’re built around are going to completely replace the legacy financial system. Of course, this is not going to happen overnight. My best guess is that this will take 10 to 15 years to fully play out – with many ups and downs along the way.

Right now, we’re seeing one of those “downs.” But remember, this massive paradigm shift in the global financial system is just getting started. It’s only a matter of time until we eventually see those “ups” again. It’s a question of “when,” not “if.”

So stick to your guns. Keep being a contrarian and a true speculator, and you’ll get very wealthy. Now is the time to build your crypto portfolio – not to panic sell.

Just remember to keep your position sizes small… never risk more than you can afford to lose… and treat cryptos as long-term holdings.

Now, back to that invitation we mentioned earlier…

As a Daily Cut reader, we’ve arranged for you to have private access to a special online event – an evening with Bill Bonner, Doug Casey, and Mark Ford.

For the first (and perhaps only) time, you’ll get to see these three self-made millionaires open up about their personal lives and business as they never have before.

You’ll also hear their uncensored views on gold, stocks, and the economy… along with the investment ideas they’re most excited about right now and what they’re doing with their own money.

RSVP to the event here.

Finally, in the mailbag – “We can’t stand in front of this moving train”…

As we showed you in yesterday’s mailbag, the pot legalization debate is heating up with Daily Cut readers. And we are swamped with responses that keep piling in.

Last week, readers Nasir and Charles said that “legalizing marijuana is a very bad idea.” But not everyone agrees with their stance…

Charles and Nasir, one of our freedoms, as you know, is the right to free thought and speech… Comparing [marijuana] to alcohol is like comparing Aspirin to Oxycontin. Our biggest addiction that kills more people by far is sugar. Maybe they should control that as well? One needs to take responsibility for oneself.

And as another reader noted… The Daily Cut is to inform us on those stocks they think are the best investments. If they were to censor that based on moral or political correctness, there wouldn’t be a need for this letter.

The federal government should stop dragging its feet on this very important issue. Legalizing this crop will be a boon for the federal and state governments, yielding an absurd amount of money to replenish coffers for both.

I am surprised that the enactment of the laws the voters have overwhelmingly approved hasn’t taken place yet. We could have been enjoying the fruits of this new industry years ago. We can’t stand in front of this moving train. We have to get on it or end up nowhere while the rest of the world moves forward to enjoy the financial benefits of the new industry.

I’m 59 years old and have seen marijuana used ever since high school. I have never heard of anyone looking for marijuana who couldn’t find it. I have never heard of anyone passing on marijuana just because it is illegal. I doubt that legalization will have any effect on the number of users. Those who take risks will continue to take risks. The biggest risk lies in those who mistakenly believe that if it is legal, it must be okay. There are still those who put their government on lofty perches and confuse legal with good and moral.

If “Mary Jane” allows people to relax and puts a smile on their face, it can’t be bad since drug companies add “happiness” into everything they sell… and in most cases, it’s the only thing in their pills that isn’t harming you.

There are a lot of good reasons to make it legal. I lost a son… overdose of hard drugs. He could find any kind of drug in any new city or town he might be in for the first time. I, of course, hate drug dealers, etc. The point is we should make all drugs legal. At least we would have knowledge of who is on what drug and take the profit away from the terrorist.

Should “terrorist” drug dealers be the ones to profit from selling pot and other drugs? Do we risk confusing what’s legal from what’s moral? Send your thoughts to [email protected].

P.S. Don’t forget to RSVP for Bill, Doug, and Mark’s special event. As a bonus, we’ve arranged an exclusive screening of the private panel discussions from our Legacy Investment Summit in Bermuda last month.