On Monday, the S&P 500 entered a bear market. That’s when stock prices fall 20% or more from a peak.

Then on Wednesday, the Fed hiked interest rates for the third time this year.

This pushed stocks up. Right after the Fed’s announcement, the S&P 500 broke its five-day losing streak with a 1.5% gain… and the Nasdaq jumped 2.5%. 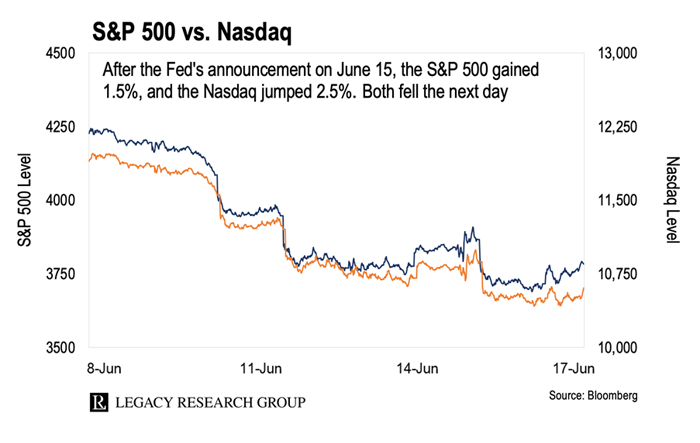 Like the two 0.5% rate hikes earlier this year, the latest increase is part of the Fed’s desperate attempt to fight inflation.

But that doesn’t worry Nomi Prins. She’s an expert on how central banks affect markets and the economy. She’s even written two books on the subject. And she knows how to help you take advantage of volatility – no matter what the Fed does.

Twenty years ago, she quit a seven-figure job at Goldman Sachs (GS). Since then, she’s been helping ordinary investors profit using the knowledge she gained on Wall Street.

We’ve been spotlighting Nomi all week because she just unveiled a proprietary strategy that can help you earn life-changing profits – regardless of market swings.

She says it could allow you to 10x your money or more. And she hosted a special presentation all about it on Wednesday. She even gave away the name of one of her top picks.

If you missed it, check out the replay of Nomi’s briefing while it’s still up.

Today, for our weekly mailbag edition, we’re featuring Nomi’s insights on everything from the fate of the U.S. dollar to Russia’s gold holdings.

Nomi has identified five investment areas full of profit opportunities – if you know where to look.

One of them is the transition from fossil fuels to clean energy.

Russia’s war in Ukraine has shown countries – especially in Europe – that moving away from fossil fuels isn’t about just reducing carbon emissions. It’s also a matter of national security.

Take Germany, Europe’s largest economy. It gets 32% of its natural gas, 52% of its hard coal, and 34% of its oil from Russia. It’s highly vulnerable if Russian president Vladimir Putin shuts off supply.

This will accelerate the shift from oil, coal, and natural gas to wind, solar, and nuclear power.

Reader comment: I believe Joe Biden is clueless and following a dangerous path regarding oil. We have it in the U.S. We should drill on government land and private land. But he doesn’t want to.

I believe that to pull oil from our reserves is stupid and asking for trouble. I understand that he has done this twice while we are watching Russia’s horrendous war against Ukraine.

We need to produce more oil in America.

Reader comment: The immediate solution is to return the U.S. to oil independence and being an exporter as we recently were. The industrial world exists on dependable fossil fuel. It will for years to come.

Nomi’s response: Thank you for writing in, William and Robert. You bring up some important points regarding oil independence.

I hear you. My goal is to weigh near-term and future trends to provide you with the best investment opportunities.

Let me clarify that I completely agree with you that the U.S. should be energy-independent and a net exporter of oil and gas. That should be a goal of any administration.

Economic strength requires solid energy policy with independence as the goal. Recent geopolitical events have proven how important this is.

And clearly, we need fossil fuels.

However, I also believe we should forge ahead on extracting oil and gas more cleanly.

Yes, drilling is a practical necessity. But we need to do it as safely and cleanly as possible.

And we need to continue to develop ways to make the use of oil and gas environmentally friendlier for today’s energy needs.

But alongside finding ways to better extract and use traditional fuels, we should produce alternative forms of energy for tomorrow’s needs.

In my five-theme investment view, I refer to this category as New Energy.

This classification is about where money is flowing. Analyzing this helps me pinpoint the best investment ideas to protect and grow your wealth.

I acknowledge that it takes traditional energy to make new forms of energy. For at least the next decade, money will be flooding into transitional energy.

Transitional energy covers finding better ways of sourcing and using traditional fossil fuels. Ways that are as clean, safe, and sustainable as possible.

This administration’s plans significantly focus on this.

I firmly believe the best thing to do in the energy field is to push forward on all those fronts. For now… and for tomorrow.

Next, readers wonder about threats to the U.S. dollar’s status as a global reserve currency…

Reader question: Nomi, I am concerned about the U.S. dollar losing reserve currency status. When the U.K. lost this status, it had a very negative impact on its economy.

The central bank reserves in U.S. dollars have steadily declined over the last 30 years. Ballpark 80% down to roughly 60%.

Short of a really stupid move on the U.S.’ part (always possible), is anything likely to replace the U.S. dollar in, say, the next 10 years?

Nomi’s response: Hi, Ernie and Lyndon. Thanks for your thoughtful emails.

I don’t think we need to be concerned about the U.S. dollar losing its reserve currency status. Not in the next 10 years, or in my lifetime…

It’s had a massive head start. The Bretton Woods system began in 1944 and pegged all currencies to the U.S. dollar. That propelled the dollar’s supremacy.

Although the Bretton Woods system collapsed in the 1970s, the U.S. dollar reigns as the primary reserve currency to this day. And it shows no signs of slowing down…

I’ll get to that in a moment. But first, the dollar should be much weaker compared to other currencies for a few reasons.

The huge amount of debt the U.S. has is one. The colossal amount of money the Federal Reserve has fabricated since 2000 is another.

These have created an irreversible distortion between the markets and the real economy. I call this The Great Distortion.

However, the dollar is still the dominant currency safe haven in times of financial crisis, war, or economic angst.

This is the case even as central banks around the world lower their dollar reserves relative to other currencies.

This safe-haven status is why the dollar has continued to strengthen relative to other currencies, especially since the COVID pandemic began. And since Russia invaded Ukraine.

Typically, there’s a 100-year cycle for reserve currencies. And given the dollar’s decades-long history as a reserve currency… you might think it’d be on its way out.

But because of The Great Distortion between the markets and the real economy… the dollar is likely to retain top spot for longer than historical patterns would indicate.

Now, to answer your question about what could replace the dollar…

Let’s assume for a moment that I’m wrong, and the dollar is on its way out. The next logical currency on deck would be the Chinese yuan.

China wants the yuan to become a major reserve currency. And in the wake of the 2008 financial crisis, it saw a chance to put it on the world stage.

Back then, central banks around the world were concerned that the Fed had let Wall Street get away with too many shenanigans.

China was very vocal in criticizing the Fed (and rightly so).

This strategy didn’t fundamentally weaken the U.S. dollar, but it did offer the Chinese yuan more of a global role.

But I see no danger of it becoming THE reserve currency and replacing the U.S. dollar in our lifetimes.

Nomi’s response: Hi, Peter. Thanks for your excellent question. Russia has indeed been on a gold-buying spree.

Crucially, Russia continued to buy gold after its economy suffered from Western sanctions in 2014. This was after it invaded the Crimean Peninsula.

And despite all speculations to the contrary, it never sold its gold. Instead, it opted to buy more.

This tells me that, unless Russia’s finances are in utter shambles, it likely won’t sell it now, either.

Plus, keep in mind that today’s 14-year-high oil prices are exactly where Russia wants them to be. Oil and gas account for up to 40% of the country’s revenue.

That said, it’s quite possible that Russia will halt gold purchases for a bit.

But it’s been far less bullish on U.S. Treasury Holdings.

For example, between March and May of 2018, Russia’s holdings of U.S. Treasury bonds plummeted from $96.1 billion to $14.9 billion. In other words, Russia dumped 84% of its American debt.

I’d say Russia will sell any American debt it still has before even considering reducing its gold holdings.

If you haven’t already, remember to catch Nomi’s presentation here.

And if you have a question for Nomi, Jeff Brown, Teeka Tiwari, Dave Forest, or anyone else on the Legacy team, send it to [email protected].