Last Tuesday, the world’s first and most famous cryptocurrency hit an all-time high of $64,836.

The standard definition of a bear market in stocks is a 20% drop from a peak. Bitcoin did that in just six days.

That kind of volatility would put off a lot of investors. If you recently invested in bitcoin, you may feel a tense knot forming in your stomach.

And no doubt, folks in the mainstream media will make a big deal of the drop. We can expect to hear all sorts of half-baked theories about why bitcoin dropped when it did.

But don’t get sucked in… What happened over the past week is just bitcoin being bitcoin.

Last month, colleague and world-renowned crypto investor Teeka Tiwari predicted in these pages that bitcoin will 10x from here and smash through the $500,000 mark within the next five years.

And as he hammers on all the time, shouldering this kind of volatility is the price you pay to earn those returns.

That’s why today, I’ll show you why bitcoin’s recent plunge is nothing to worry about. I’ll also pass along some recommendations from Teeka on how to make sure you have as robust a crypto portfolio as possible.

So the drop isn’t all that significant.

Here’s the thing… Volatility is par for the course with bitcoin. 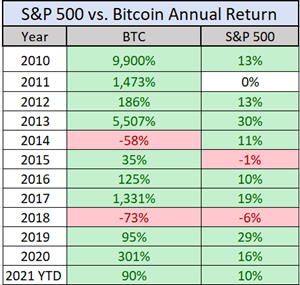 Bitcoin was the superior investment – by far…

But to earn that higher return, you had to stomach higher volatility along the way. 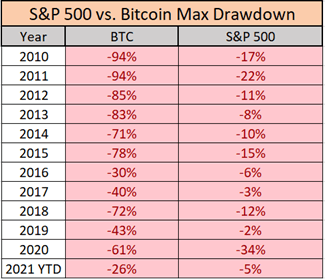 So we’re talking about drawdowns between three and four times as steep for bitcoin as for stocks.

If you can’t handle that kind of volatility, you’re not going to earn the incredible kind of returns bitcoin has delivered.

This is also true for wealth building outside of crypto…

Take Amazon.com (AMZN). Its shares have been one the greatest wealth-building vehicles in history. 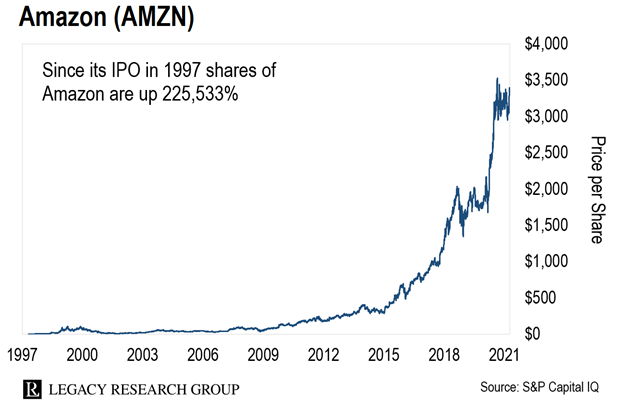 Apple (AAPL) is another example… 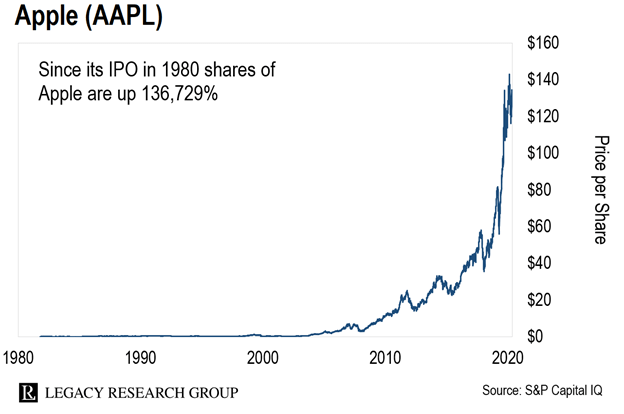 But to realize those gains, you’d have had to go through a 91% plunge in the dot-com crash. And there were several drawdowns of 40% or more to challenge you along the way.

Teeka believes bitcoin will roughly 10x from today’s level to break through the $500,000 mark… in the next several years.

As I’ve been writing to you about in these pages, bitcoin has reached a tipping point in terms of mainstream adoption. The more folks seek out bitcoin as a long-term store of wealth, the higher its price goes.

That doesn’t mean bitcoin will go up in a straight line. Teeka…

We’ve seen how volatile bitcoin can be. In the 2018 “Crypto Winter” bear market, bitcoin plunged as much as 84%… only to rocket to new highs this year.

I’ve said for years volatility is the price you have to be willing to pay for life-changing gains in crypto. You won’t see these huge up cycles without some huge down cycles, too.

There are many people who aren’t willing to pay that price. There’ll be folks who bought bitcoin at $62,000… and watched it drop to $56,000… who will panic and sell.

You’ll see it happen again and again. It’s the nature of most humans. They’re just not wired to make a lot of money from a volatile asset.

The lesson is clear… To make money in bitcoin, you need to know how to sit out this kind of volatility.

It’s not something you learn overnight. It often takes years to figure out how to resist the urge to follow the crowd and panic sell.

Fortunately, there are some simple steps you can take to make sure you hold through the inevitable dips.

The first is to always pay attention to how much you’re invested in bitcoin as a portion of your overall wealth.

Teeka recommends you set aside 10% of your portfolio for bitcoin and up to 2% for other cryptocurrencies.

That way, even a 50% drop in bitcoin will translate into just a 5% drop in your overall portfolio. That’s unpleasant. But it’s not a big enough drop to compel you to panic sell.

You also want to hold a diverse basket of cryptos…

That means not overconcentrating in one or two crypto assets. Instead, you should put an equal amount into a wider range of cryptos.

That way, if one crypto you own takes a hit… it won’t drag down your entire crypto net worth.

My job is not only to find great ideas for you. It’s also to make sure you survive the rough times… help bring you through… give you courage in your convictions… and get you across the finish line.

So don’t give up at the one-yard line. Don’t sell your bitcoin because of this pullback. Trust the research. Follow sensible asset allocation and position sizing guidelines. And let time do the heavy lifting.