Last Wednesday, we saw an unprecedented smackdown of the world’s most powerful oil companies.

Folks in the mainstream press are calling it “Black Wednesday”… a reference to the devastating Black Monday stock market crash in 1987.

As you’ll see today, one of the oil alternatives to keep an eye on is an even more unpopular commodity – uranium.

In fact… colleague Nick Giambruno says uranium is the highest-upside, lowest-downside speculation you can make right now in the natural resource sector.

First, a quick catch-up on the events of last Wednesday…

A court in the Netherlands ordered oil giant Royal Dutch Shell (RDS.A) to cut its carbon emissions in line with the goals of the 2016 Paris climate agreement.

It’s the first time a court has enforced this voluntary agreement among 197 nations to move away from carbon-emitting fuels such as oil and coal.

Shareholders at Chevron (CVX) voted 61% in favor of a proposal to force it to cut its carbon emissions.

And an activist group of shareholders called Engine No. 1 appointed two new directors to ExxonMobil (XOM)’s board against the wishes of management.

Engine No. 1 owns only 0.02% of Exxon’s shares. But it won the backing of the three largest investment firms in the U.S. – BlackRock (BLK), the Vanguard Group, and State Street (STT).

BlackRock, the world’s largest money manager, said it joined the shareholder revolt because of its frustration with Exxon’s refusal to take climate change seriously.

That it joined with activist investors shows times are changing for Big Oil.

And Moody’s Investors Service, one of the three biggest credit rating agencies, said the shareholder vote foreshadows similar results in future board elections at other U.S. oil companies.

The first shift was when humans started burning wood to cook on and warm themselves with.

This gave us energy-rich food. And it allowed us to survive harsh winters.

The second shift was when animal power allowed us to farm at scale and paved the way for settled societies and large cities.

The third shift was when we entered the Industrial Age. Fossil fuels such as coal, oil, and natural gas powered the transition.

Solar and wind are the best known of these new energy sources. But uranium – the key ingredient of nuclear power – will also play a crucial role…

To get there, the amount of electricity it generates from clean sources needs to double.

Nuclear reactors are the top producer of clean energy in the U.S. So it’s impossible to rely only on solar or wind power to meet the demand.

People don’t like uranium. It’s politically incorrect. Some hear the word “uranium” and think “cancer.” Many get emotional because of its association with Hiroshima, Nagasaki, Chernobyl, Three Mile Island, and Fukushima. Uranium is the world’s most hated commodity.

But nuclear power is a lot safer than people think.

A reactor partially melted down at the Three Mile Island nuclear power station near Harrisburg, Pennsylvania, in 1979. The power station’s security system kicked in and prevented a more serious incident.

And despite what anti-nuclear activists claim, studies analyzing cancer in the area surrounding the reactor show no statistically significant increase in cases.

The average dose of radiation for someone living within 10 miles of the plant after the accident was just 1/625 of the maximum yearly amount permitted for U.S. radiation workers.

And in the case of the Fukushima nuclear accident in Japan in 2011, an earthquake and a tsunami pummeled a crappy old nuclear power plant head-on. The electricity supply shut off… and the reactors began to melt down.

But as far as we know, there hasn’t been single case of someone getting a lethal dose of radiation from this incident.

Fortunately, Nick doesn’t care about being politically correct. (If he did, he wouldn’t have a place on the Legacy Research team.) He’s been helping our Crisis Investing readers profit from the nuclear power opportunity since 2016.

He added uranium miner Uranium Energy Corp (UEC) to the model portfolio in December 2016. Since then, it’s up 206%.

And two other uranium mining stocks in the model portfolio are up 101% and 134%.

The rally has really heated up over the past 12 months…

The chart below is of the Global X Uranium ETF (URA). This exchange-traded fund (ETF) tracks a basket of uranium mining stocks. 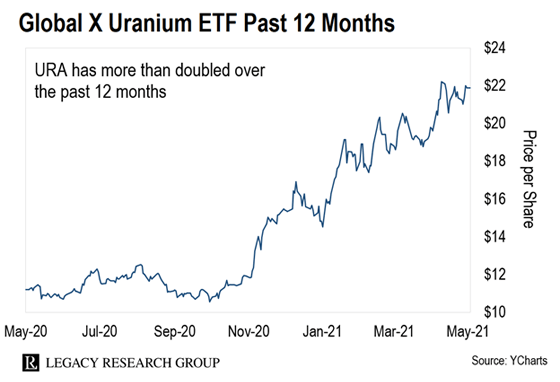 Over the past 12 months, URA is up 111%. That means it’s more than doubled investors’ money over that time.

So it may seem like there’s not much room for uranium stocks to climb. But look at the same ETF going back to the Fukushima accident in 2011…

Last year’s rally is hardly a blip on this chart. Despite this rally, URA is still 83% below its peak.

Right now, I can’t think of a commodity with more upside and less downside than uranium. While uranium stocks have started to take off recently, we’re still much closer to the bottom than the top.

I’ll have more for you on the energy transition underway… and how you can profit… in future updates.

Meantime, consider adding shares of the Global X Uranium ETF to your portfolio to capture the upside ahead.