Chris’ note: There’s a lot of excitement building around my colleague Jeff Brown’s 5G summit. It kicks off tomorrow night. And there’s still time to secure your slot. Just follow this link and add your name to the guest list.

For today’s dispatch, we’re handing the reins over to Jeff. Below, he digs into why 5G is not only an unstoppable investment trend, but also a matter of national security. In fact, as you’ll see, 5G is on President Trump’s radar right now as a top national security priority…

It was a massive espionage campaign targeting at least 10 major wireless carriers around the world.

The hackers were tracking about 20 political and military targets. They were collecting data from these carriers about the targets’ phone calls, texts, and physical locations.

It’s right out of a spy movie.

This campaign – dubbed Operation Soft Cell – had been going on since 2012. And Cybereason says all the evidence points to the culprit being a hacker crew working for Chinese intelligence.

But what’s clear is that key Trump administration officials got wind of this campaign around the same time they started banning 5G networking equipment from two Chinese firms: Huawei (pronounced “wah-way”) and ZTE.

Today, I’ll show you why the ban was a smart move for our national security. I’ll also show you some of the specific ways you can profit from the 5G boom.

I’ve been tracking the 5G space for my readers since 2017.

It’s the next evolution of the wireless networks that connect your smartphone to the internet. These new networks are going live on a weekly – and sometimes daily – basis.

On average, 5G will deliver speeds 100 times faster than the 4G networks we use today.

And having the fastest possible communications network on the planet is critical for our economy.

That’s why U.S. wireless carriers will invest as much as $275 billion in 5G networks. This will create about 3 million jobs for Americans. And 5G will add about $500 billion to U.S. economic output.

At an industry level, expect $200 billion invested every year through 2025.

That’s why 5G has gained an influential supporter…

President Trump is eager to speed up the 5G wireless build-out.

Early last year, his administration threatened to build its own national 5G network if wireless carriers couldn’t get it done.

My suspicion is that it was a warning.

The White House was telling Verizon, AT&T, and T-Mobile, “Get out there and build these 5G networks quickly – or we’ll do it for you.”

In other words, it was lighting a fire under private companies involved in the 5G build-out.

Now, you may be thinking this early 5G coverage launch in D.C. isn’t a coincidence. And you’d be right…

But putting 5G tech in the hands of policymakers demonstrates progress. After all, the president has made his intentions on 5G clear. In April, he said:

The race to 5G is a race America must win, and it’s a race, frankly, that our great companies are now involved in. We’ve given them the incentive they need. It’s a race that we will win.

And the president is right…

Countries leading the deployment of 5G networks will have a competitive advantage over their rivals.

And the tech companies in these first-mover countries will be the first to develop and sell the hardware and software for 5G wireless services.

Remember, new technologies such as self-driving cars and fleets of remote trucks depend on the data speeds 5G brings.

Now, the fear is that China will take the lead. That would leave the U.S. dependent on Chinese 5G infrastructure. We’d be vulnerable to more cyber spying from Chinese spies.

That’s why the president wants the country’s 5G network built out quickly. And it’s why he wants it to be built by U.S. and European firms.

As I’ve been showing you, 5G is an unstoppable trend. And companies providing the necessary tech for these 5G networks will benefit.

What to Do Now

I’ve been recommending my readers look at companies that provide critical network infrastructure.

The firm played a key role in the 4G build-out that started in 2011. Today, it’s also involved in putting up the towers used in the 5G build-out.

And it’s been a great stock to own. 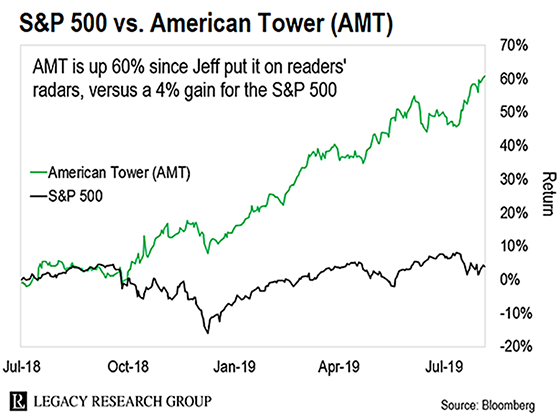 But that was just the first phase of the 5G boom.

My research shows that the third and final phase is going to be the most profitable by far.

That’s when I’m hosting my free 5G investment summit, The Final Phase of the 5G Boom.

I’ll show you why the final phase I’ve identified is set to be so profitable. And I’ll give you my checklist for picking the best 5G stocks. I’ll even give you the name of my No. 1 5G watchlist company.

I hope to see you there. You can save your spot here.